The DARK FISHING SPIDER is one BugLady’s favorite spiders (even though it isn’t even a crab spider). First of all, it’s beautiful. Second, it’s big, one of the biggest in North America – the leg-span of a large female can approach four inches! Third, it’s a challenge to sneak up on and photograph. The Hail Mary shot of the spider that’s snugged up under a wooden railing, in which the BugLady could see the front of her camera but not the back – a selfie of sorts – shows its typical attitude when company calls. 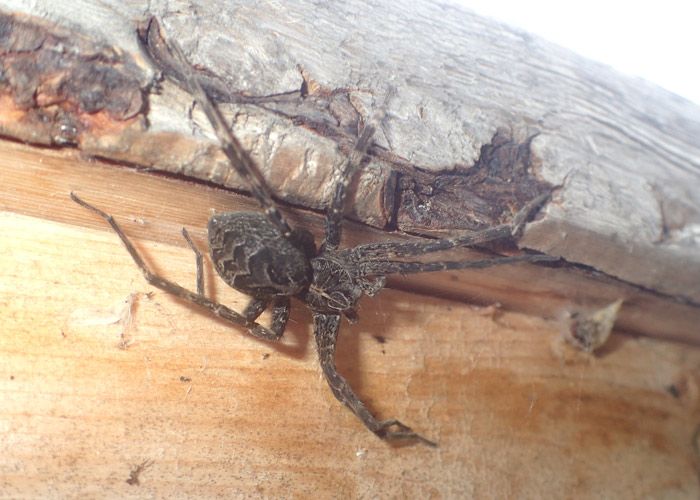 They inhabit half of the continent, from the Dakotas to Texas to the Atlantic, and up into southeastern Canada. Within that range they are often found near water, but they also stray far from it, commonly living on trees in woodlands and sometimes gaining access to basements (they may bite if handled – you might, too – but they aren’t aggressive). They are mostly nocturnal hunters, sitting quietly on a vertical surface by day.

Females, with a body length of up to an inch, are about twice the size of males. Their bodies range from pale to dark, and from brown to gray (plus the odd, orange juvenile), and they have both black and light-colored markings. Their legs are banded, and their eight eyes are arranged in two curved rows (the BugLady has never met a Dark fishing spider that was quite this cooperative). 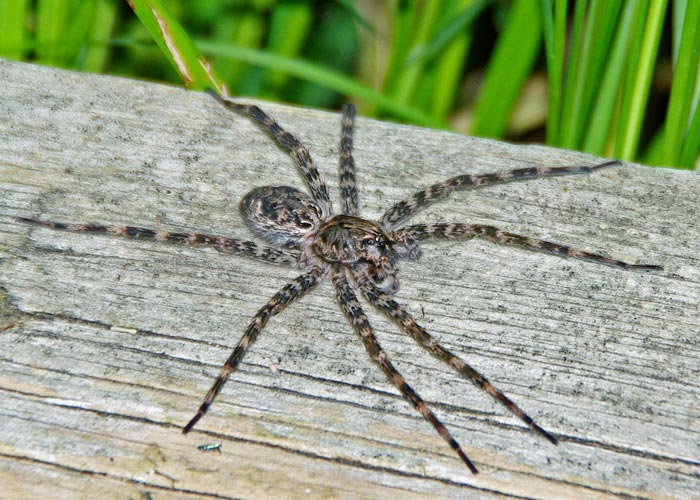 With a name like “fishing spider,” it’s not surprising that their list of prey includes tadpoles, small fish, and aquatic insects. These they find via vibrations produced when the prey traverses the surface film. The spiders can skate, row, or run across the water (their legs are waxy); they can also dive below the surface to catch their supper, and an alarmed fishing spider may hide below the surface, too, for up to half an hour, breathing air that’s caught in its hairs. Woodland dwelling fishing spiders feed on invertebrates (even slugs). Larry Weber, in Spiders of the North Woods, says that they can tackle cricket-sized prey, and the BugLady found a picture of one with a small spring peeper. They are ambush hunters; they don’t spin a trap webs, and they eat several times their own weight each day.

“Nursery web” refers to the female’s habit of preparing a shelter for her egg sac, which can hold 1,000-plus eggs. She has carried it around since she formed it, and she will conceal it when it’s about time for the eggs to hatch so that the spiderlings will have shelter after they emerge. The similar-looking wolf spiders also carry an egg sac, but they carry theirs at the rear, attached to their spinnerets; nursery web spiders carry their egg case up front, in their jaws, and so cannot feed for the duration. Egg sacs hatch in mid-summer; partially-grown spiderlings overwinter under loose bark, in rock piles, tree holes, etc. and mature late in the following spring.

We have spoken before about a spider Mom’s little habit of boosting the odds of her reproductive success (more young, fitter young) by grabbing a protein meal, in the person of spider Dad, immediately after mating. And sometimes in the person of an auditioning male, if she doesn’t like the cut of his jib, or has a headache, or gets annoyed, or decides that he would serve her better as a meal than as a mate. It’s called sexual cannibalism.

Researchers discovered that female Dark fishing spiders are so inclined, but his becoming a snack isn’t because he doesn’t absent himself quickly enough, after the fact. For him, mating is physiologically lethal – he dies spontaneously. He doesn’t go to waste, though, and his contribution ensures the continuation of his genes. A female may re-mate, but a male will pay more attention to virgin females (he can tell by the scent of the silk she lays down). All in all, an interesting take on monogamy.

Here’s a video of pair mating, complete with unnecessarily intrusive music. Spoiler alert – tenderhearted BugFans should avert their eyes at 2:40.

This behavior/inevitability is not shared by other nursery web spiders or even by other members of the same genus. 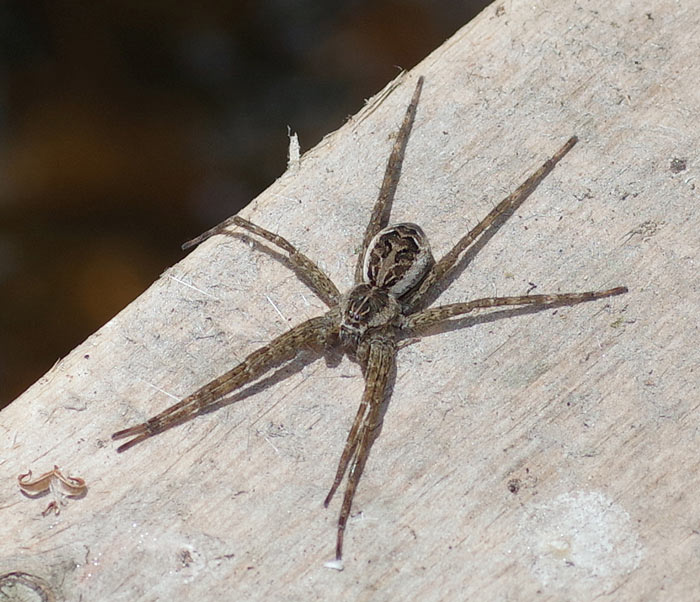 Late last spring, the BugLady shared the boardwalk at Riveredge’s Ephemeral pond with a half-grown STRIPED FISHING/NURSERY WEB SPIDER (Dolomedes scriptus) (“scriptus” for “written,” a reference to the markings on the back of its abdomen).

Like the Dark fishing spider, the Striped fishing spider is found over much of eastern North America, but it is more wedded to wetlands than is its very similar, slightly larger, more common relative. It’s often seen sitting on floating vegetation, its front legs on the surface film, monitoring for ripples, but here’s one with a damselfly, and there are reports of them preying on crayfish! Say researchers Scott, Dillard, Foltz and Loughman, “The spider had ingested the majority of the crayfish’s abdomen at the time of discovery, and had used silk to anchor the crayfish to the undersurface of the rock where feeding was taking place.”