Daphnias are at the lower limit of what the BugLady can accomplish with her macro lens (though she does have a recognizable shot of a Cyclops…). So, back into the water we go and into the realm of the NETI—not the pot, the “Not-Exactly-True-Insects.” Daphnias, a.k.a. water fleas , are yet another example of great stories coming in small packages. 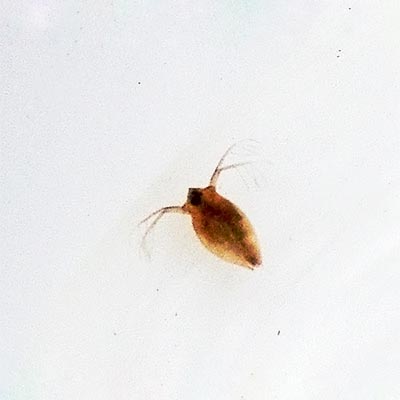 How small? Pretty much at the far range of what the naked eye can easily detect/identify. One source describes them as the size of the “equals” sign on the keyboard. They’re listed as less than 5mm.

Who are they, scientifically speaking? Daphnia are in the phylum Arthropoda, sub-phylum Crustacea, class Branchiopoda (with fairy shrimp and a few others), order Cladocera and the family Daphniidae. For our purposes one of the more common daphnias, Daphnia pulex , will serve as Everydaphnia. According to Ann Haven Morgan, in her lovely Field Book of Ponds and Streams, “In 1669, the Dutch naturalist, Swammerdam, described the common water flea as Pulex aquaticus arborescens—‘the water flea with the branching arms’—and ‘water flea’ it has remained ever since.” It was officially described and welcomed into the Linnaean system in 1785.

You can see what? A translucent carapace/shell of their own creation covers the thorax and abdomen. The carapace looks like a tiny bivalve/clam-type shell, but it is actually a single, “folded” piece that doesn’t quite meet on the ventral side, forming two “valves” but with no hinge. The legs are found in the gap between the edges. The segments can’t be seen easily, and neither can the first pair of antennae. 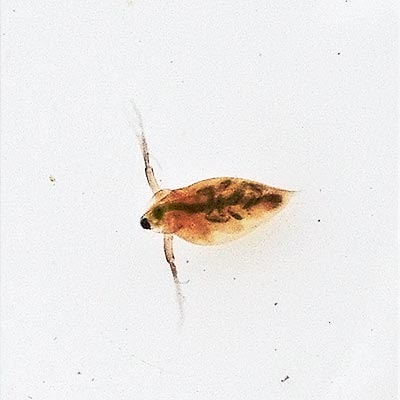 Based on an extensive study of daphnia anatomy, the BugLady figures that the ovals on the dorsal side of this Daphnia are young in the brood chamber! The front blob in the head is the eye; second blob in the head is probably part of the intestinal tract. Unlike most insects, which do not molt after achieving (sexual) maturity, daphnia molt about 25 times in their lives; when they are in reproductive mode, they release a brood each time they molt.

How do they navigate their world? Daphnia are found in all sorts of aquatic habitats, including ephemeral ponds but not including fast-moving or polluted waters. A large, compound eye rotates constantly, sensing changes in light intensity. They don’t like light much, and many species move from a pond’s surface to its floor several times during a 24 hour period. The mouth, the small, first antennae, and the setae (hairs) on the ventral edge of the shell pick up “smells.” Hairs on the ventral edge of the shell and sensory hairs on the antennae are their touch “organs.” They “breathe” through the body surfaces.

Movements of the larger pair of antennae also provide the jerking locomotion that gave them the water flea moniker. Individuals may live about a year, eating organic detritus, bacteria, algae, and some micro-zooplankton. A current set up by their legs delivers food into the mouth.

Sex—or not : As soon as the water starts to warm, offspring are produced solo, by Mom (a talent called parthenogenesis ). She’s pretty good at it, too, popping out as many as 40 at a time, all female. According to Morgan, “one Daphnia pulex produces a brood of eggs every two or three days [other sources said 10 days] and with its descendants it is said to produce 13,000,000,000 in 60 days.” It takes the young a few molts to achieve reproductive adulthood, and when they do, they already have eggs in their brood chamber. Daphnia eggs hatch in the brood chamber, and the young stay there for a few days. They are released when Mom molts, at which time she reloads the brood chamber.

While she is cranking out more and more offspring, the water temperature is changing (warming in summer or cooling in fall), the water is getting more crowded, food is declining, and the concentration of waste products rising. These stressors cause her to produce some male offspring (up to 50%), and orgies ensue. The eggs produced by these sexual unions are called winter eggs (sexual encounters also introduce some genetic variation). Extra layers are added to the walls of the brood chamber for the winter eggs, and the whole “egg container” is called an ephippium. The egg-filled ephippium is released as a unit and it can survive drying and winter. If the drought is temporary and the pool refills in fall, the eggs in the ephippium hatch (most of them are female) and the cycle is repeated.

Shape-shifting? The warming waters of summer may (or may not) cause individuals to change the shape of their head/helmet from rounded through pointy to absurdly pointy. Predatory pressures may result in smaller, more transparent individuals that may grow neck spines.

Who cares? Well, fish care—a lot. Daphnia are bread and rice to many young fish, comprising up to 90% of their early diet! Carnivorous bladderwort plants care, too; Morgan says that one bladder can hold up to three daphnia. Aquatic insects also appreciate them, and wading birds. Aquarists (not Aquarius’s) care – daphnia provide food for aquarium animals. 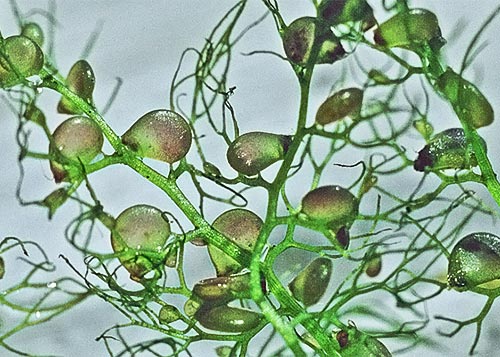 Scientists care. The translucency of their carapace allows scientists to watch a daphnia’s innards at work. Daphnia are almost universally available, are easy to rear in the lab/school, and look cute under (and can survive) the cover slip of a slide. You can subject them to alcohol, nicotine, etc and watch their reactions, study immunity, disease, cellular function, and more.

Scientists are so enthralled with daphnia that they have worked out the genomic sequence (which wades deeper into scientific waters than the BugLady is comfortable going). Suffice it to say that humans have 20—25,000 genes and daphnia have 31,907, more than one-third of which are unique to daphnia. Many of the genes are duplicates. One of the legacies of the late, great entomologist Dr. Tom Eisner is the mantra that knowing the natural history of an organism can help us hypothesize what is/isn’t/should be happening internally. Daphnia are short-lived critters that survive in constantly-changing conditions, and scientists think that the environment may help determine which of the duplicate genes will be expressed.

The rest of us care, too. In his Freshwater Invertebrates of the United States, Pennak says that “the water fleas have been favorite objects of observation by both amateur and professional biologists ever since the invention of the microscope.”

And we can barely see them! Wowsers!