Damsel bugs were mentioned briefly in a recent BOTW called “Wall Watching”, but there’s more to their story then that, starting with a nom de guerre that’s a bit unusual for a bloodthirsty predator. One explanation suggests that their longish, spindly legs give them a delicate appearance (damselflies were so-named because of their delicate, “maidenly” mien); another is that because they hold their front legs up slightly (Mantis-style), they have the look of a woman lifting the hem of her dress. 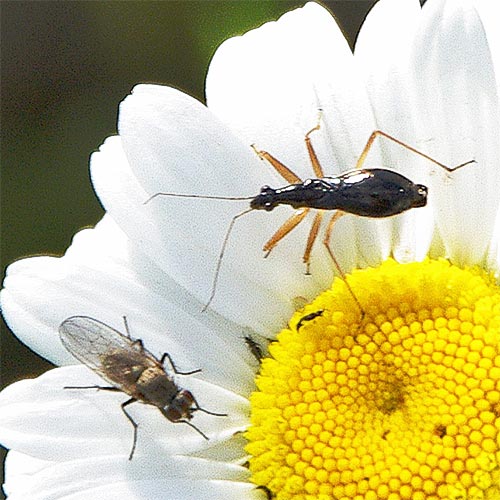 Damsel bugs are true bugs in the Order Hemiptera and the family Nabidae. About one-tenth of the world’s 400 Nabid species live in the gardens, grasslands, and agricultural fields of North America.

DBs are predators that get the Good Housekeeping Seal of Approval from the USDA and the Cooperative Extension folks because their menus include so many agricultural pests. They were even featured in a “Know Your Friends” article in the Midwest Biological Control News. They eat an impressive variety of herbivores—fellow Hemipterans (like leafhoppers, plant hoppers, and aphids), sawfly larvae, caterpillars (including cabbageworms, corn earworms, armyworms, corn borers, and the green cloverworm, of future BOTW fame), insect eggs, the eggs and larvae of Colorado potato beetles (they are common in potato fields in the Northwest), and spider mites. Of course, they consume some beneficial insects along the way, and they also scarf their competition. When predators prey on each other, it’s called “intraguild predation,” and its benefits are both nutritional and competitive. DBs occasionally nibble on plants, too. When food is scarce on the landscape, they can survive for a few weeks without eating, but then they may dabble in cannibalism.

They catch their prey with raptorial front legs that are thickened and lined with spines. Grasping supper firmly, they puncture it with the piercing “beak” that comes as standard equipment on Hemipterans and suck out the contents.

DBs are eaten by the usual suspects—spiders, birds, and other insects. Tachinid flies and mymarid wasps lay eggs on/in DBs so that their growing young may parasitize their hosts, and DBs also succumb to entomopathogenic fungi. They are sensitive to many broad-spectrum pesticides, so farmers that are happy with the free pest control provided by DBs must be careful not to poison them.

The BugLady has photographed two flavors of Nabis (the most common genus in the DB family)mdash;the generic, brown Nabis sp. that appeared in “Wall Watching” and the Black Damsel Bug (BDB) (Nabis subcoleoptratus). At a little less than a half-inch long, they are similarly-sized. The sandy-brown Nabis sp. has fully developed wings as an adult, and the shiny BDB, which is an effective ant mimic, has very short wings. Both have long antennae, long legs (they’re good runners), and buggy eyes. 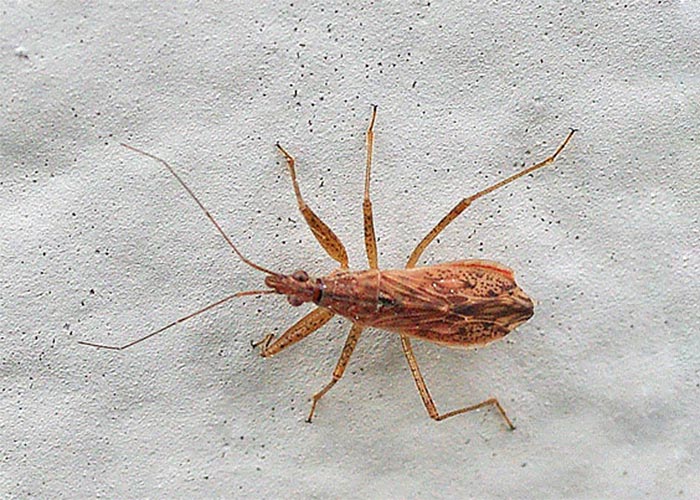 DBs are hardy souls that overwinter as adults or as almost-mature nymphs, and they are sometimes seen during warmer parts of the cooler months. The brown DB was photographed in mid-November.

Lady beetles (which do a dynamite job of aphid control), and praying mantises (generalized predators like the DB) may be purchased by farmers and gardeners, but a method for producing DBs commercially has not been developed yet (maybe because they dabble in cannibalism).

For lots of good information, the BugLady recommends the University of Kentucky Critter Files site.