The BugLady is busy and offers this rerun from 4 ½ years ago. The original has been enhanced with a few new, educational tidbits.

Daddy longlegs, a.k.a. Harvestman, (because the first species to be described were collected during harvest time, and because they are numerous then) are in the phylum Arthropoda (jointed legs), which consists of the classes Crustacea, Insecta and Arachnida and which, according to one author, accounts for about 80% of “living creatures.” Don’t let the eight legs and the spider-like appearance fool you; Daddy longlegs are not true spiders. Under the big umbrella of the class Arachnida, they belong in the order Opiliones, not with the true spiders in the order Araneae (there are some nice Greek myths about Ariadne and Arachne, and the BugLady trusts that BugFans will look them up on their own). 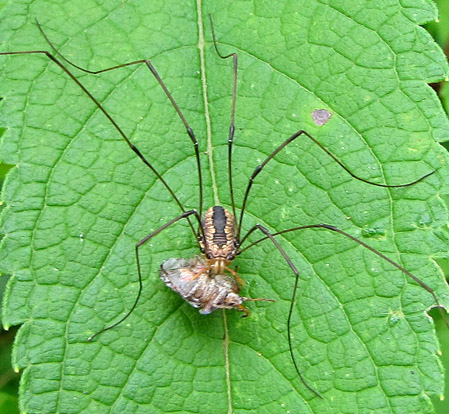 DLLs have had the same basic design for the past 400 million years, give or take. They are made up of two body segments, a cephalothorax (fused head and body) and an abdomen. The DLL’s waist is broad, leading one author to say it resembles a rice krispies on legs (they can move pretty fast on those long legs). They hear via vibrations; their eyes are on short stalks that look like antennae (but arachnids don’t have antennae); and their eyesight is poor. The senses of taste, touch and smell are incorporated in the longer, second pair of their four pairs of legs. A startled DLL may wave these sensory legs in the air. When they clean themselves, which is often, they pay special attention to the second pair of legs. Males are smaller-bodied and brighter-colored. They are found in fields and meadows, both nocturnally and on bright days. 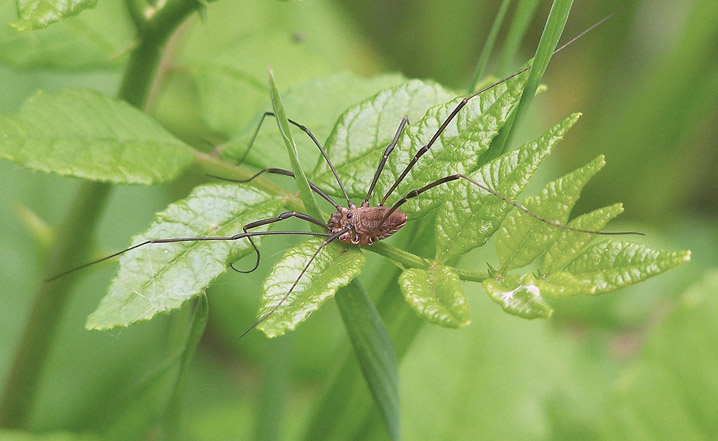 A DLL might shed a leg if a predator grabbed it or if a venomous invertebrate stung/bit it (it’s called “leg autotomy”). They’ve even developed a unique muscle attachment that minimizes bleeding when they do have to jettison an appendage. One researcher reporting in the Journal of Arachnology noted that the resulting “loss of fitness” is still preferable to “a catastrophic loss of fitness (e.g. death).” DLLs cannot regenerate missing legs, and if they lose both of the sensory legs, they’re toast. Despite their long legs, they carry their bodies close to the ground.

Eisner, in Secret Weapons, calls their ability to produce a noxious odor their second line of defense. When they’re grabbed by the body, a nasty-smelling chemical oozes out of a few dorsal glands, coats the body, and repels predators, especially ants. The odor is undetectable to humans, except those who really get up close and personal. Phalangiists claim they can distinguish species by their odor (Phalangiists. Scientists who work with daddy longlegs. In the Family Phalangiidae. OK, The BugLady may have made up that word).

While not what you’d call “social,” DLLs do gather in large numbers—of hundreds and even thousands—for a variety of reasons; when they collect in fall, it’s thought to be a warming strategy. A congregation of DLLs is a thicket of tiny knees. 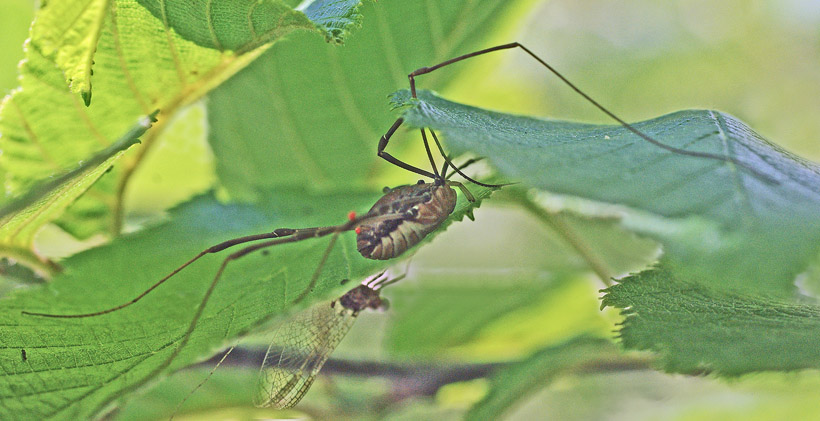 Females lay as many as 40 pale green eggs underground in fall, using a long ovipositor. Head-of-a-pin-sized young hatch in spring, live one summer, mate, lay eggs and die. They produce neither web nor nest. 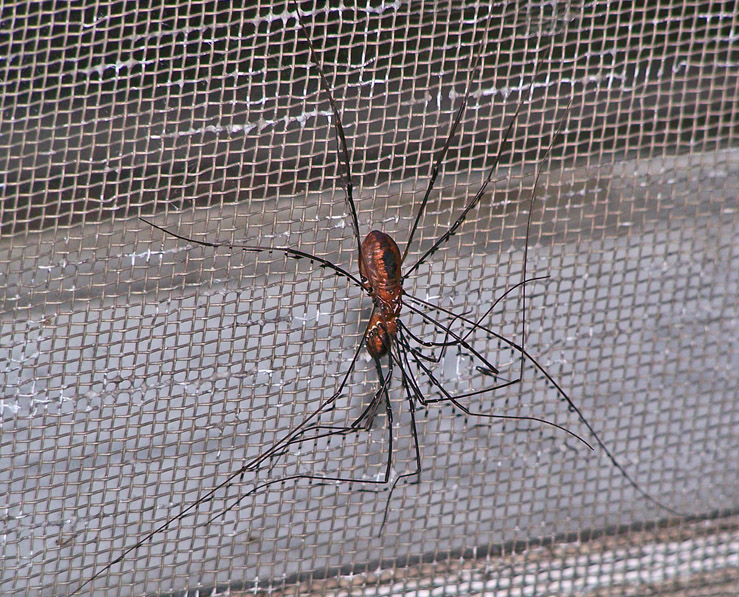 Harvestmen are predators, eating insect eggs, small insects like aphids and springtails and critters as large as snails, earthworms, and other DLLs. A few species scavenge dead or decaying matter. Lacking the venomous fangs of true spiders, the Harvestman hunts for soft-bodied prey which it squeezes with its pincers and then stuffs into its mouth. Please note, boys and girls – “Lacking the venomous fangs of true spiders” means that Daddy Longlegs “Do Not Bite.” They do not have fanged mouthparts and They! Do! Not! Bite!!

The BugLady sometimes sees a daddy longlegs with its body resting flat on a leaf and its legs dangling over the sides, but she has no clue why it does that. She also has a (bad) slide of a shed skin of a DLL (shedding is another time in its life when a DLL might break off a leg)—the critter simply pulled itself out of a slit on the back and walked away, leaving empty legs and an empty body, intact.

The BugLady is not sure why the pair of daddy longlegs on the window screen was “lip-locked” one night in late summer, though in some species, the male gifts the female with a “secretion” before mating. Whatever was going on, there were nine voyeuristic DLLs nearby, watching.

Relatively little is known about Harvestmen. Why? Because although they are beneficial in gardens, they are neither crop pests nor disease vectors, so when research funds are handed out, Phalangiists get bumped to the end of the line.

Jonathan Swift said “a flea hath smaller fleas that on him prey,” (the curse of a liberal arts education). The tiny, red mites found on daddy longlegs fill the same niche as a mosquito or tick does on larger organisms. The Bug Lady always wonders what she would see if she could photograph the mite’s leg.

Long-Bodies Cellar Spiders (Pholcus phalangioides, family Pholcidae) are true spiders and common household residents. Like the rest of us, they lived in caves before civilization and buildings arrived, and like the rest of us, the relative warmth provided by houses has allowed them to extend their range north. LBCSs are often mistaken for DLLs because of their long legs and similar size—in fact, a common name of these cellar spiders is “Daddy Long-legs Spiders” (another name, because of the shape of the cephalothorax, is Skull Spider). 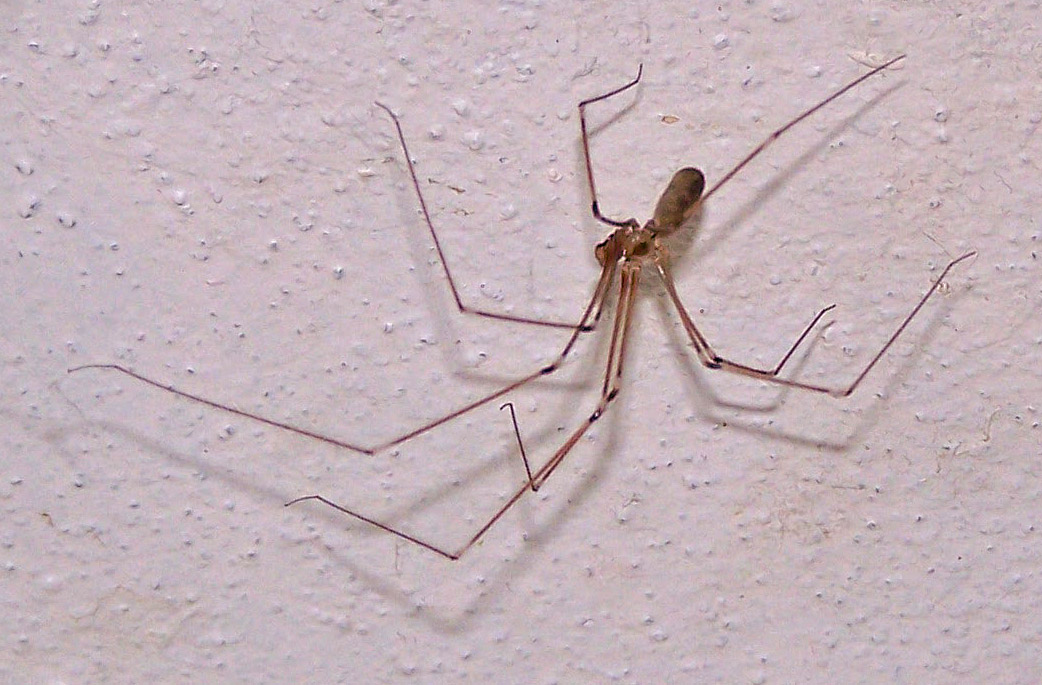 Unlike DLLs, LBCSs do spin webs, for the purpose of hunting (and they hang upside down in their webs). This spider spun its randomly-shaped web in the BugLady’s shower; most of its confreres do live in her basement, but the BugLady’s house wears Halloween decorations year ‘round. When alarmed, LBCSs may shake or pump up and down so rapidly that both web and spider become a blur (some DLLs also bob, minus the web), confusing predators (but not, alas, the BugLady and her vacuum cleaner).

Rule of Thumb: If it’s outside, it’s a DLL; if it’s inside, it’s a LBCS (especially now that the BugLady’s had her back door replaced).

Small World Department—Wikipedia shows a picture of a DLL eating the tail of a blue-tailed skink. Skinks shed their tails when grabbed just like DLLs shed legs.

Folklore—Harvestmen point in the direction of cows. Around here, they’re right.