The ephemeral pond is humming these days, and the BugLady has been giving her 50mm macro lens a workout, channeling her inner photomicroscopist (a person who takes pictures through a microscope). A reminder to newer BugFans—the BOTW definition of “bug” is the one that your average first grader uses.

The Cyclops is an aquatic non-insect whose name is taken from a character in classical Greek mythology (the BugLady trusts that BugFans will dust off the tattered Edith Hamilton mythology paperbacks they’ve been carting around since high school and will look up the story of Cyclops). The BugLady has always viewed cyclops as tiny, benign critters that twitch through their watery lives at the very limits of her vision, but it turns out that they have a dark side. 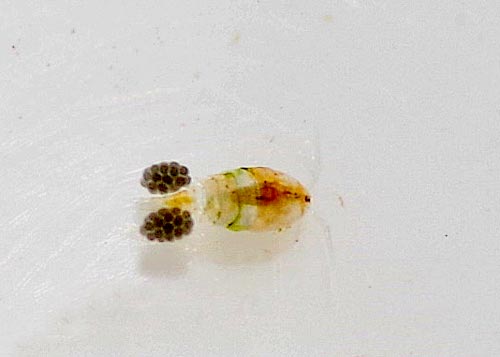 These pear-shaped critters are related to fairy shrimp, daphnia, scuds, sowbugs, and water sowbugs—all of previous BOTW fame. As crustaceans, they number shrimp, crayfish and lobsters among their distant relatives, too. The Subphylum Crustacea is in the huge phylum Arthropoda; arthropoda also includes insects and spiders, and the phylum may account for 80% of known, living species of animals. Within the crustacea, cyclops (which is both singular and plural) are in the class Maxillopoda and in the subclass Copepoda (a diverse group comprised of about 13,000 species).

Cyclops and the rest of their copepod brethren are everywhere on the globe, mainly in calm waters, cold or warm, from the water traps of bromeliads to roadside ditches to underground caves to oceans. They migrate passively, caught up in the feathers of waterfowl, stuck to aquatic insects that move from pond to pond, or in dust clouds that blow encysted larvae across the landscape from a dried up pond. They are among the most numerous of multi-celled animals in any body of water. 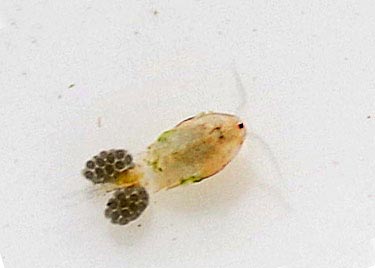 Yes, they are small—the average cyclops needs to stand on tiptoes to reach 2mm. Though they can scarcely be seen in a basin of pond water, cyclops are instantly recognizable because of their jerky movements and because the female is almost always toting around an egg sac or two.

They come in a variety of neutral colors, plus transparent (and according to Elsie B. Klots in The New Field Book of Freshwater Life, some species that dwell at pond edges may be bright pink, green or blue in spring). Like other copepods they have five pairs of legs attached to the thorax, and their heads have mouthparts and two pairs of antennae. Cyclops have a single black or red eye that distinguishes light from dark (see: mythology, Cyclops, above). The antennae are sensory organs, and the first pair is also used in locomotion. The forked tail is adorned with spines, bristles and hairs that aid in locomotion, balance, feeding, and in sensing the nuances of their environment. They exchange gases through their body surface and are tolerant of low oxygen concentrations. 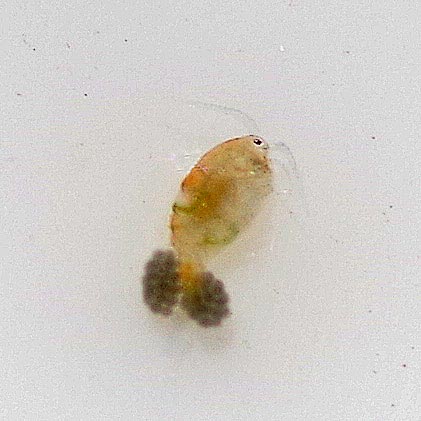 The actions of a number of appendages combine to cause their characteristic gait. When they begin to row with their five pairs of legs (copepod means paddle foot), the antennae are tucked against the body at the start of the leg stroke but are extended at the end of the stroke, which acts to put on the brakes but also helps to keep the tiny critter from sinking (all this in less than 1/12 of a second). They use the abdomen as a rudder.

About those egg sacs. While mating, he passes one or more sperm packets to her, enough to fertilize several broods. Five to 40 eggs hatch inside the egg sacs and the young exit within five days. The used egg sac is immediately replaced by a new one that fills with new eggs. The young that hatch from the eggs go through five stages in a form called a nauplius before assuming a more cyclops-like larval form called a cyclopoid. Some species pop out little nauplii all summer; some breed just once. Other kinds of copepods can produce “summer eggs” and then form special thick-walled winter eggs that can withstand harsh environments like the annual drying of an ephemeral pond. Cyclops don’t have “winter eggs,” but they can aestivate (rest in suspended animation) in drought-resistant cysts or cocoons in one of the pre-adult, cyclopoid stages. 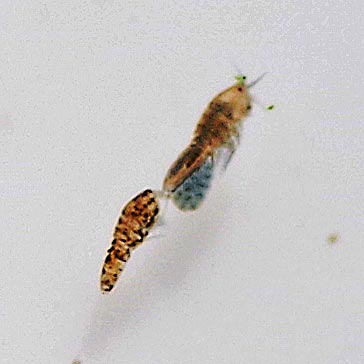 What fuels cyclops? Depending on the species, they are powered by plankton and other organic matter, algae, detritus, or by eating animals even tinier than themselves. Some are parasites. They form a link in the food chain between the even-tinier algae and bacteria that they consume and the larger plankton predators that are eaten by fish. One of cyclops’ predators is a plant—carnivorous Bladderworts catch and digest them in underwater bladders. Cyclops are sometimes introduced into aquaria to provide food for fish, but they may reproduce faster than the fish can eat and overrun the tank.

And the dark side? Cyclops can be an intermediate host to some pretty nasty parasites including the Guinea worm in Africa and Asia, a fish tapeworm that makes eating sushi and ceviche a potentially risky business, and a roundworm in Asian countries that can infect humans with a condition with the awesome name of gnathostomiasis (the Asian swamp eel that is the main host for this nematode has found its way to the Americas, so the stage is set). There’s a link between copepods and cholera in some tropical countries – the cholera germ hitches a ride on the tiny, swimming critters. 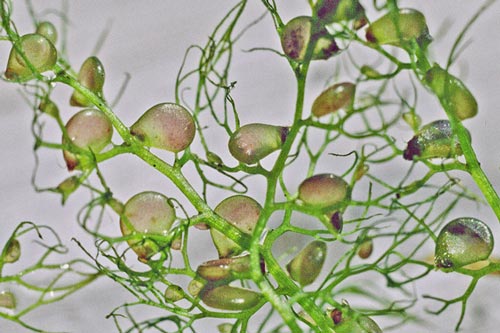 Interesting cyclops fact—Cyclops are present in the water supply of some large American cities, where routine treatment renders them harmless (dead) but does not filter them from the system. As crustaceans, they are not kosher according to strict Jewish dietary laws, making unfiltered tap water off limits to observant Jews.