The BugLady spent some very warm days among the Cup plants (Silphium perfoliatum), those jumbo prairie plants whose opposite leaves join around the stem (it’s called a perfoliate leaf) resulting in a small reservoir that often holds rain water or dew. Resource after resource says that these “arboreal puddles” are used by birds, insects and even tree frogs, so the BugLady decided to photograph the action. But it was hot, and the reservoirs were dry, and something pretty dramatic was going on elsewhere on the Cup plants, and the reservoir-users will have to wait for a future BOTW of their own. The undersurface of the tender top leaves of many Cup plants were wall-to-wall with (insert creepy adjective here) red aphids—a cast of thousands—and there were some very cool supporting actors. Life and death, playing out against a red polka-dot backdrop.

What did the BugLady find? Vegetarians first.

Red aphids, probably in the genus Uroleucon, formerly called Macrosiphum. More than 4,000 species of aphids have been identified, and there is much variation within the group. Your garden-variety aphid consumes lots and lots of plant juice, and according to Eaton and Kaufman’s Field Guide to Insects of North America, “Most aphids have a symbiotic relationship with microbes that live inside them, essentially acting as a ‘sap refinery,’ turning nutrient-poor phloem fluids into essential compounds.” Many species of aphids exude a substance called honeydew , which is harvested by ants or which falls on the leaves and is eaten by visiting flies, wasps, and other insects. 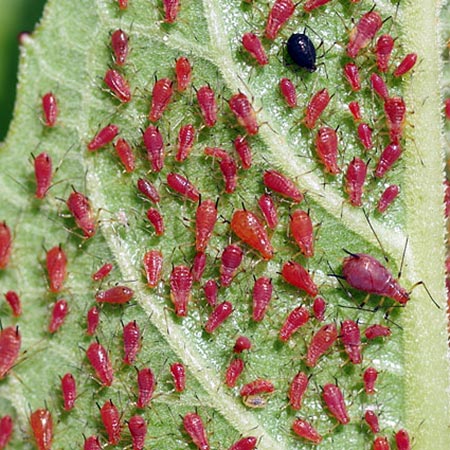 Aphids reproduce by parthenogenesis (pronounced “virgin birth”). Females dominate the plant stems and leaves, popping out tiny replicas of themselves without benefit of romance (or even eggs) and producing, when a leaf or stem gets too crowded or when parasitic wasps abound, winged females that can fly away. As the end of summer nears, Mom produces a generation that includes males, courtship ensues, bodily fluids are exchanged, and eggs are laid that will overwinter, producing a crop of females (“stem mothers”) in spring. And so it goes. They live fast and they live large.

Despite its menacing-looking presence in a herd of aphids, the Helmeted squash bug nymph (Euthochtha galeator) is actually a plant feeder (its similar-looking, equally-spiny assassin bug cousins are a different story). 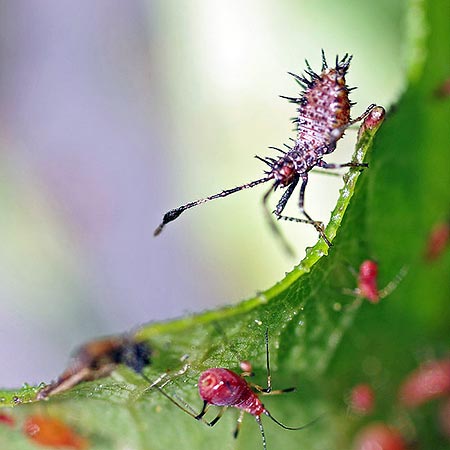 The BugLady found several Dogwood spittlebugs (Clastoptera proteus) on Cup plants that grew near a red osier dogwood in the prairie; they must have moseyed across the overlapping leaves. In some parts of the country, DSs are called Blueberry Spittlebugs. Oh yes—when the DS/BS walks, the stripy end goes first. 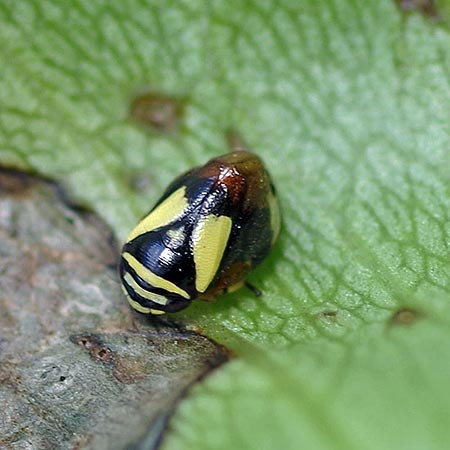 And now the carnivores:

This looks like a Braconid wasp, great with child, and she seems very interested in the gall on the Cup plant’s leaf vein/stem, and that’s about all the BugLady knows about that. Braconid larvae are parasites of other insects; if you’ve ever seen a caterpillar with white “swab tips” on its exterior, you’ve seen Braconids at work. 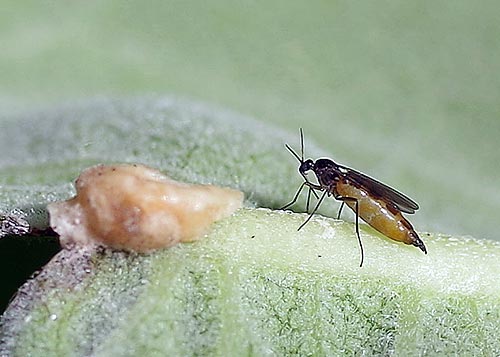 The BugLady sometimes finds Ponometia Bird-dropping moths head-down in dry Cup plant reservoirs. She wonders if the Daddy long legs was planning on taking advantage of the “If I-can’t-see-you-then-you-can’t-see-me” pose. 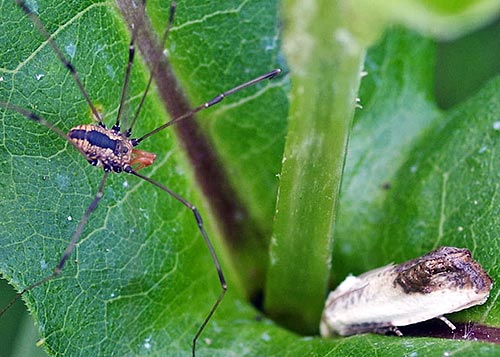 In the insect world, species with Complete metamorphosis (egg-to-larva-to-pupa-to-adult) often change mouth parts and diet when they mature. Not so the Ladybird beetles—pere, mere, fils and fille dine eagerly on aphids. 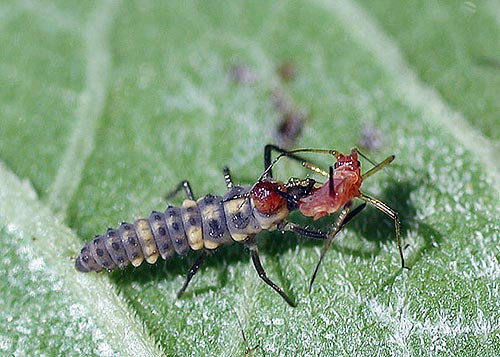 Both the stiletto-shaped Brown lacewing larva and the chunkier larva of the Green lacewing stalk the Cup-plant leaves, nabbing anything smaller than they are. So do their winged parents. 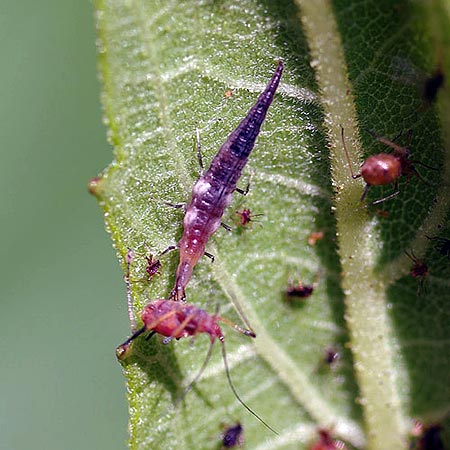 These small-but-flashy predatory flies scoot around on the leaf surfaces. Their diets include aphids and mites. According to Eaton and Kaufman, their larvae are poorly known but most are probably also predators. Long-legged flies have been (one of) the BugLady’s “nemesis bugs” this summer, eluding focus. 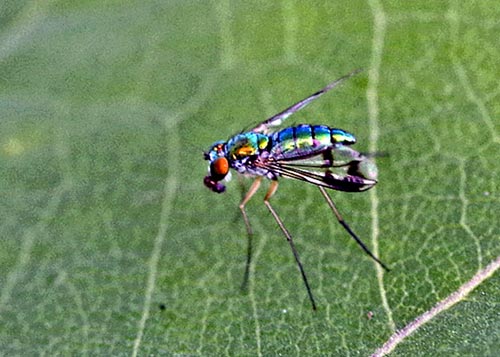 Eaton and Kaufman liken Robber flies to a group of birds called flycatchers that sit on perches and “hawk” flying insects as they pass. With their speed and their ability to hold prey with bristly legs, they are able predators. 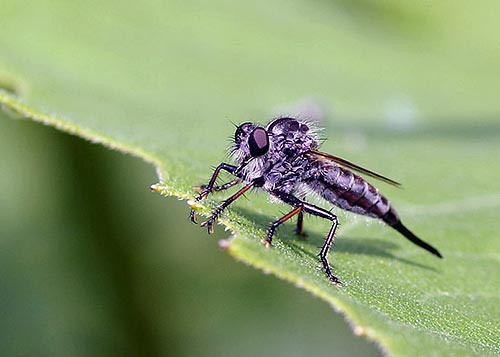 This larva, the offspring of the small, bee-mimic Flower/Hover/Syrphid flies, starts out as a tiny orange larva on the undersides of the leaves, tackling aphids much larger than itself. There’s a Syrphid fly larva in the opening red aphid picture. Adults feed on nectar and pollen—and honeydew from aphids. 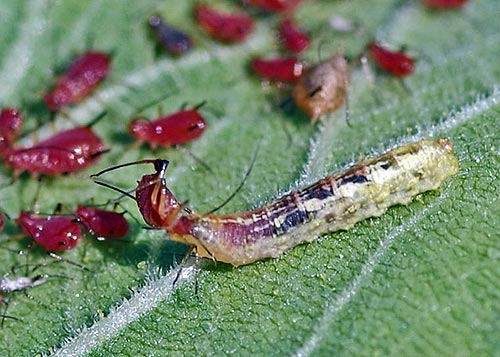 The holes in the tops of these bloated, “golden” aphids were not made when carefree, red aphids shed their stiff, old skin so they could grow into their stretchy, new skin; the exit holes were made by tiny wasps. The wasp larvae that inhabited these aphids are parasitoids; the larvae hatch in or burrow into their host and eat it alive—timing their own pupation with the death of the host. When they are all grown up, they exit through the toughened, golden exoskeleton (some people call the “empties” aphid mummies). 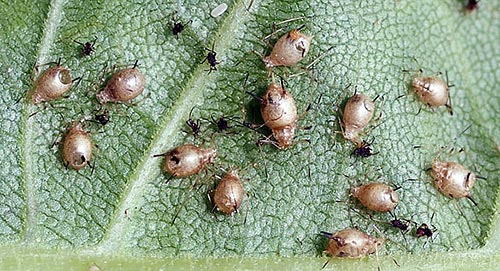 Most insects pass the winter in the form of eggs or pupae, though some overwinter as nymphs and others as almost-developed larvae. A smaller number go through the winter as adults. As the red aphid cycle was waning, the BugLady found some eggs that had been left on the Cup plant. A roll of the dice for the future.

A variety of spiders also hang out on Cup plants – what better place for a spider to ply its trade than amidst all that traffic? Wooly aphids add their feathery fringe to the stems, and leaf miners trace lines between the top and bottom surfaces of leaves. Others, like the dogwood spittlebug, are just passing through, landing briefly on a leaf before continuing their flights to elsewhere. 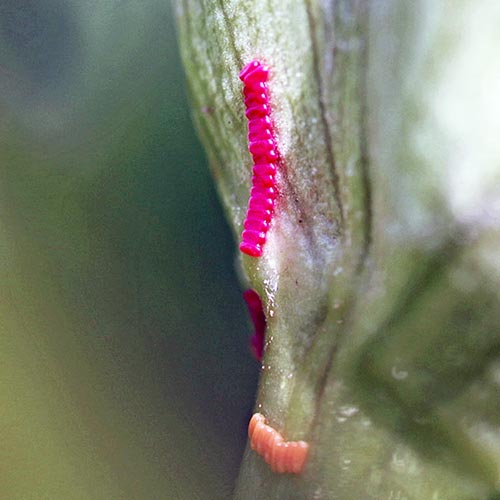