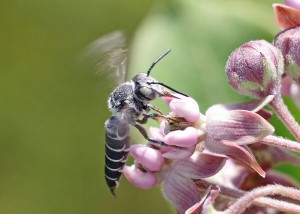 The story of the Cuckoo leafcutter bee has several moving parts. It starts with the family Megachilidae (of recent BOTW fame), a large and diverse group of solitary bees that includes the leafcutter, mason, and resin bees, and others. Leafcutter bees are famous for their modus operandi – they cut tidy circles from the edges of leaves or petals and use them to wrap their egg packets, line the walls of tunnels (typically pre-existing tunnels in wood), and make walls between egg chambers. There are 630 species in the Megachilidae in North America, and 4,100 species worldwide.

Within the Megachilidae, the tribe Megachilini contains the genus Coelioxys – the Cuckoo leaf-cutter bees, aka the Sharp-tailed bees (Coelia means “belly” and “oxys” means “sharp”). The Coelioxys aren’t the only bees that are “cuckoos,” a term that refers to bees that lay their eggs in another bee’s nest; Rusty Burlew, on the Honey Bee Suite website, tells us that 20% of all bee species are nest parasites (another source put it at 15%) and that this behavior occurs in most bee families (which means, he says, that there’s “a whole lot of poaching going on”). 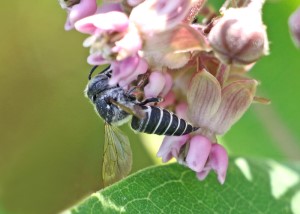 The host bees aren’t just babysitting. Cuckoo bees are “kleptoparasites” (kleptoparasitism means “parasitism by theft”). Their offspring take advantage of the work of the nest-building/host female, eating the food stores she has collected and killing their rightful owner. There are 46 species in the genus Coelioxys, and each species targets different species of bees, mostly from within their own Megachilidae family.

Because they no longer make nests for their young (one website suggests that they’ve been nest parasites for so long that they’ve forgotten how), they are minimally-hairy (oddly, they have hairs on their eyes), and they lack the dense, pollen-collecting hairs under the abdomen that many leaf-cutting bees sport. For that reason, they’re not good pollinators.

One website says that “Cuckoo leafcutter species appear very similar to the casual observer, and species identification is often best left to an expert,” and the BugLady plans to take that advice (for a change). Females have pointy abdomens, and males’ abdomens are toothed. Most of our northern species are basic black with white lines, sometimes with red in the legs, but some Southern species are fancier ([1] [2] [3]). Most are less than a half-inch long.

Female Cuckoo bees are bee-watchers; they visit flowers to sip nectar, but also to spy on potential hosts and follow them back to their tunnels.  When its owner leaves, looking for more pollen, the cuckoo bee enters the tunnel and uses the sharp tip of her abdomen (a modified stinger) to puncture the leafy walls of an egg chamber and to lay her eggs inside.  Her larva will use its sickle-shaped jaws to bisect the host egg or larva, and it will kill any of its own siblings in the chamber.  It pupates in the egg chamber, and its emergence the following year will be synched with the flight period of its host.

FOR THE RECORD: to every author out there who likened the actions of cuckoo bees to cuckoo birds (family Cuculidae), a clarification. New World species of cuckoos (except for three species in South America) build their own nests and care for their own young; some (but not all) Old World members of the cuckoo family (the 56 members of the subfamily Cuculinae, the Parasitic cuckoos) are, famously, brood parasites. The difference between a nest parasite and a brood parasite is that brood parasites, like our Brown-headed Cowbird, leave their eggs in other birds’ nests with the expectation that the adoptive parents will raise their young. This often comes at the expense of the nest-maker’s brood, since the cowbirds hatch first, grow fast, monopolize the feedings, and may elbow the other chicks out of the nest.