Crickets, along with katydids and grasshoppers, are members of the order Orthoptera (straight wings). Most Orthopterans have hind legs dramatically adapted for leaping, and many also have wings—a “leap” is part legs and part wings. Most are vegetarians, although there are forays into carnivorous, omnivorous, “scavenger-iferous” and cannibalistic lifestyles. They develop via simple/incomplete metamorphosis, in which the young hatch out looking like mini-adults and don’t have a resting/changing/pupa stage. Eggs are generally laid in the ground, plant stems, piles of bat guano, etc. in the fall; they hatch in spring and take 2 to 3 months to mature. Today’s BOTW features three decidedly different-looking crickets.

Unlike the camel cricket, below, the field cricket is a “true cricket” in the family Gyrillidae. It’s dark and chunky with long antennae, and the female (this is a male) has a scary-looking ovipositor that looks like a long stinger, which she inserts into the ground to lay her eggs. Although field crickets are winged, their wings are, like the wings of ostriches, too short to bear their weight. Field crickets eat vegetation, mostly, but they also feed on dead and dying insects when they can find them. They stridulate (BugTalk for make-noise-by-friction) by rubbing a “scraper” at the base of one forewing against a “file” located on the base of the other, like a thumbnail on a comb (grasshoppers typically rub a wing and a hind leg together); their “ears” are located on their front legs. They have a complicated vocabulary designed to attract females and repel (they hope) rival males. Field crickets produce a series of three-part chirps and, when courting, they give off high-pitched courtship trills accompanied by a little dance. According to Eric R. Eaton and Ken Kaufman, in the Field Guide to Insects of North America, the “come hither” song of the male can also attract a parasitic fly that is tuned to the same frequency, and she takes the opportunity to lay an egg on the male as she passes. Cool! 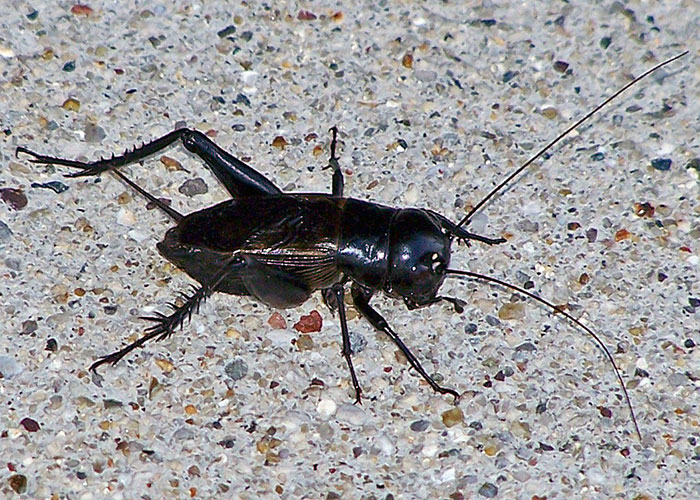 A cricket’s rate of chirping is directly proportional to the temperature (they chirp faster as the temperature increases), and mathematical formula exist for figuring the temperature based on the chirp rate of several species of crickets. For the field cricket, the number of chirps in 14 seconds + 40 = temperature of the spot where the cricket is sitting. Field Crickets like to come inside to spend the winter, and the BugLady agrees with the Japanese that its good luck to have crickets singing on one’s hearth (or under one’s dresser or one’s bathroom rug or in one’s dog food bin, even though they are undoubtedly eating the rug or the dog food). Because they are mostly night-singers, some people don’t appreciate them as house guests. The BugLady “doesn’t get” the Chinese tradition of raising testosterone-laden “fighting” crickets and betting (big) on the fights.

Also in the True cricket family, the omnivorous tree cricket browses on small, soft-bodied insects like aphids, and sometimes on fruit and leaves. Unlike the primarily nocturnal field cricket, tree crickets can be heard day or night. Nathaniel Hawthorne said of their trills, “If moonlight could be heard, it would sound like that.” 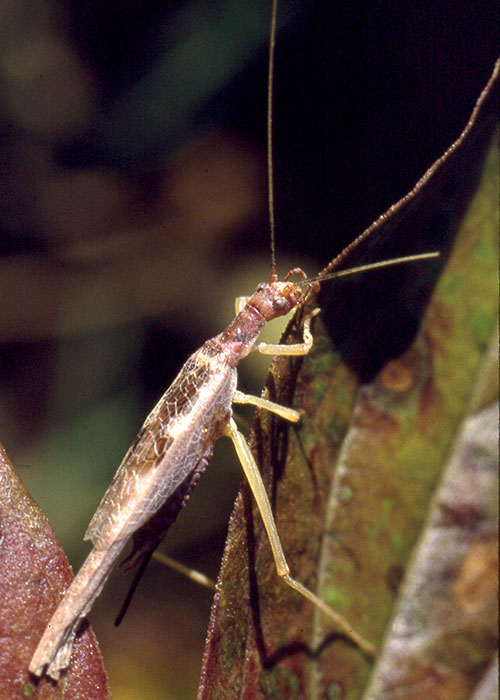 The male provides food for the female during mating; she consumes secretions from glands on his thorax. Who said romance is dead!

Camel crickets are in family Gryllacrididae, the “Wingless Long-horned Grasshoppers.” They are another of the BugLady’s basement dwellers (she was thrilled to learn that other typical habitats of the camel cricket include caves, abandoned mine shafts and old wells). They are classified, diet-wise, as detritivores, whose catholic tastes range from plant materials, including fungi, through dead insects, including deceased camel crickets. Their phenomenally long antennae are equipped with sensory apparatuses that are used to test the environment, communicate with other camel crickets and detect predators, which include fellow basement dwellers like spiders and centipedes (and they are probably eaten by the BugLady’s basement milk snake). Using their mouthparts, camel crickets groom their antennae and legs carefully and often. 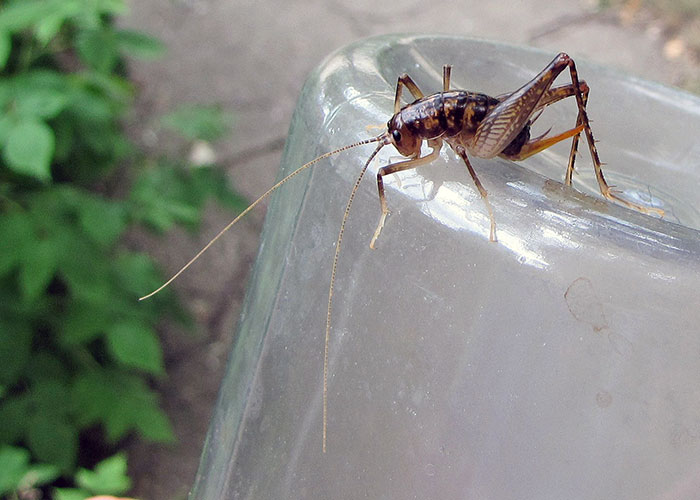 They are hump-backed, inch-long, buff-colored, and nocturnal. This individual is a male; it lacks the spear-like ovipositor of an adult female. They are wingless and therefore silent; silent and therefore earless. There is a wonderful chapter about them in Broadsides from the Other Orders by Sue Hubbell (every life-form has its fans), who notes that another common name for them is “Devil’s coach-horse.” Devil’s coach-horse is a common name more frequently given to a large and fierce European Rove Beetle that is also established on the West Coast (check it out on Wikipedia) which, according to Irish lore, was a “familiar” of the devil, who took the form of the beetle in order to eat sinners. Heady company for the humble camel cricket.