Still in the process of moving, and it’s May, so another re-run. The BugLady dusted off another decade-old episode (yes, BugFan Laurel – 10 years!!!) and added new pictures and information. And yes, as always, the BugLady is using a rather inclusive definition of the word “bug.”

Crayfish are classified in the Phylum Arthropoda (“jointed legs”), in the Class Crustacea (referring to their hard, outer coverings), and in the Order Decapoda (“ten legs”). More than 300 species of these “mini-lobsters” blanket North America; the Rocky Mountains and western Great Plains have historically been fairly crayfish-lite, and the Southeast is most species-rich. A Wisconsin DNR publication dated 2012 lists eight species in the state at that time—Northern Clearwater, Rusty, and Virile crayfish (the three most common species), and Devil, Calico, White River, Red swamp, and Prairie crayfish. 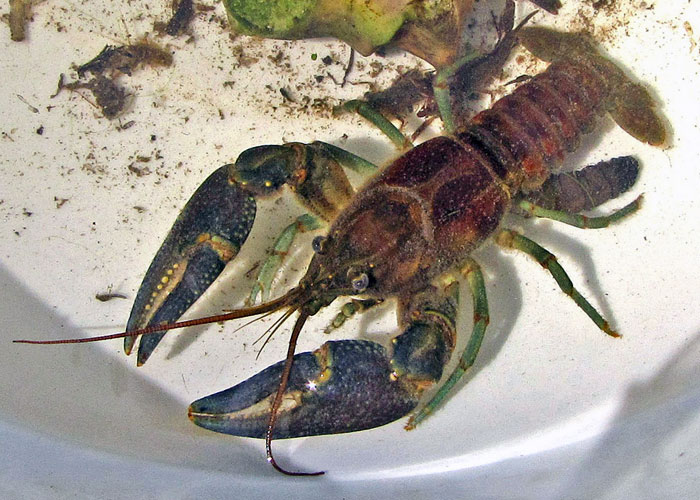 Crayfish inhabit shallow waters, running and still, though some live in damp-lands away from standing water, and some will even settle at the base of a hillside where run-off from above provides their moisture. Most species are intolerant of pollution. Species that live in drier conditions or whose aquatic homes dry up in late summer build “chimneys” in an attempt at climate-control. In search of water to keep their gills moistened, these relative landlubbers excavate vertical tunnels in the earth, constructing at the mouth of the tunnel a cylindrical pile of mud pellets—a chimney. There they live, in damp and solitary splendor (except for a bit of co-habiting during the breeding season). The Bug Lady’s youngest child once wrote in a poem that “crayfish build chimneys so their voices will echo when they sing.”

According to Wikipedia, “The study of crayfish is called astacology.”

A carapace covers the cephalothorax (fused head and thorax), and the “snout” that protrudes from the front of the carapace is called the “rostrum.” Antennae and stalked eyes decorate the cephalothorax, and five pairs of walking legs are found on its underside (the front set has been modified into a pair of impressive claws that they use to crush or rip their food). Gills and a balance organ, into which the crayfish incorporates grains of sand as sensors, are located inside it.

The abdomen consists of six segments terminating in a flipper-like “telson” (tail). Below the first five segments are pairs of small appendages called swimmerets. The swimmerets move to create water currents that wash over the gills and assist in respiration, and they also function in reproduction. Crayfish go forward by creeping and move backward pretty fast by tucking/folding their jointed abdomen under them several times, and they can walk sideways. If a limb is lost, a crayfish can regenerate it. 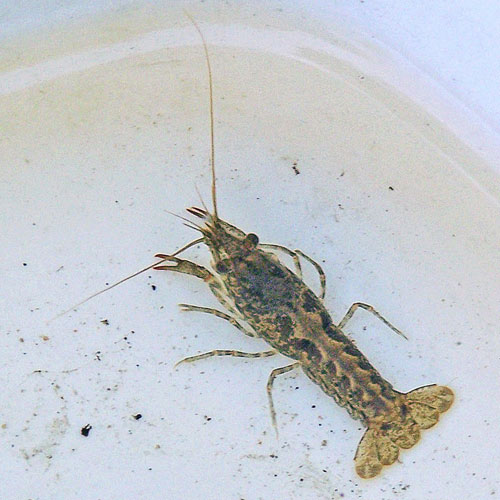 Check out this web page for an up-close look at the external anatomy of a crayfish.

Crayfish (crawfish, crawdads, mudbugs) are omnivores and often scavengers, feeding on dead plants, live plants, snails (mainly those species with thinner shells), aquatic insects, small fish and carrion (when she was in a much earlier instar, the Bug Lady was given some raw bacon with which to angle for crayfish, and both she and the crayfish thought it was mighty tasty). Crayfish are eaten by raccoons, otters, screech owls, lots of fish (and, apparently, Ring-billed Gulls), and by humans, who should cook them well in order to avoid a lung fluke that some crayfish are intermediate hosts of in the eastern part of their range. 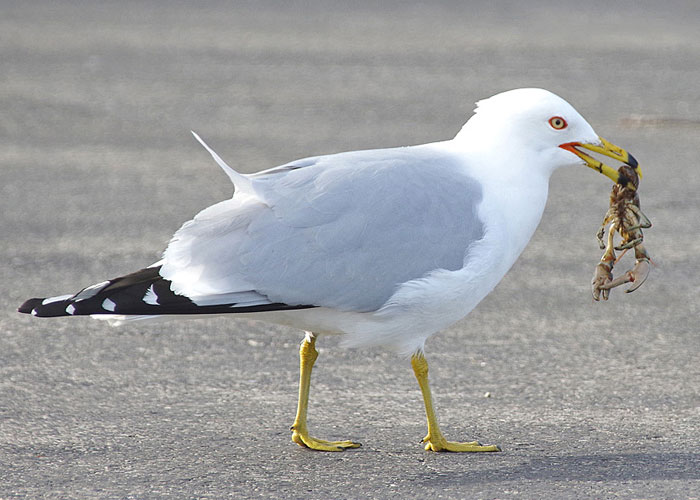 J. Reese Voshell, Jr, in his excellent book “A Guide to Common Freshwater Invertebrates of North America,” tells us that crayfish are an important domino in aquatic ecosystems. Their actions may determine the density of the aquatic plants, which determines the health and composition of the accompanying animal community.

The aggressive Rusty crayfish (Orconectes rusticus), is an invasive “native” (native, that is, to the Ohio River Basin) that was first found in Wisconsin in 1960 and has since achieved pest status here. Rusty crayfish were probably introduced by bait fishermen and/or aquarium owners discarding unwanted animals into ponds and waterways, but they are also sold to schools by biological supply companies, and when the kids go home for the summer… They are aggressive toward native crayfish, toward the fish that would normally eat them, and toward the toes of wading humans. They eat twice as much as native crayfish, and they impact fish populations by eating fish eggs, small fish, insects eaten by fish, and aquatic vegetation needed by fish for cover and for spawning areas. And they reproduce avidly. Pretty much a clean sweep, damage-wise.

Here’s their present range; for an interesting tale of crayfish eradication, check out this page from UW-Madison. Rusty crayfish control? You can help. 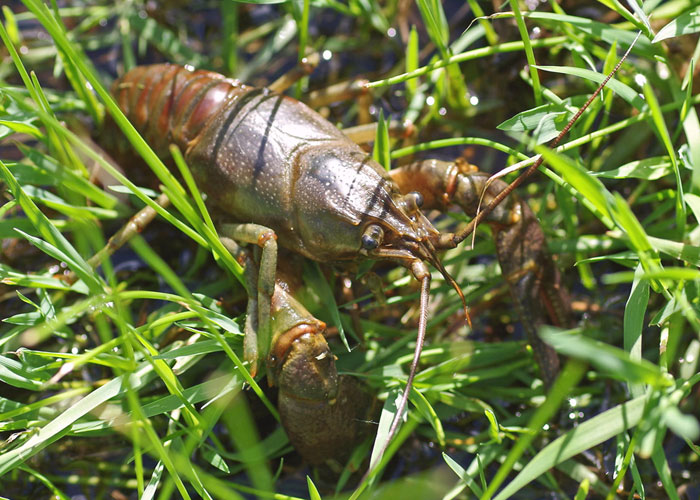 Since this original crayfish episode was written 10 years ago, a second alien crayfish has appeared in Wisconsin, the Red swamp crayfish (Procambarus clarkii). Back in the summer of 2009, residents of a subdivision northwest of Milwaukee started finding bright red crayfish in their lawns (and running them over with lawnmowers). When the DNR investigated, they found a population of Red swamp crayfish in a local pond and began an all-out effort to eliminate them. This species is farmed extensively in the south and shipped live to people who want to have a real Cajun crawfish boil, and it’s also sold as a classroom animal – whatever the origin, someone released the extras.

Red swamp crayfish are called an “ecologically plastic species,” another way of saying that they’re very adaptable. They tolerate drought and can hike considerable distances looking for water. Like the Rusty crayfish, they out-compete and out-reproduce the native species, and they are notably hard on amphibians. Red swamp crayfish can transmit to native crayfish a fungal disease called “crayfish plague,” which damages the muscles. On their home turf around the Gulf Coast, this crayfish is famous for weakening earthen berms and undermining stream banks with its tunnels.

Here’s the present range of the Red swamp crayfish. They’ve also immigrated to more than 25 European and Asian countries.