This BOTW is a retread. The BugLady likes crane flies and has seen quite a variety in the past few months, and she realized that the original offering was a bit skimpy—insufficient scholarship.

Etymological news first: Crane flies have collected an amazing number of (often regional) names. Because of the mistaken notion that they eat mosquitoes, they are variously called mosquito hawk (a name shared with dragonflies), mosquito wolf, and skeeter eater. They’re called “male mosquitoes” (because male mosquitoes don’t bite, either). Texans may call them gallinippers, though bugguide.net lists gallinipper as a large species of mosquito and adds that “Females bloodfeed day and night and are able to bite through heavy clothing.” They’re called a gollywhopper in Maine (gollywhopper is another name for the beard that hangs from a turkey’s neck and, in Maine folklore, a giant, edible chicken). The British call them Daddy-long-legs, to the utter confusion of visiting Yanks, and call the tough-skinned larvae “leather jackets” or “leatherback slugs.” The “crane” part of the name refers to the fly’s long, thin legs.

And a true fly it is. Located, with mosquitoes, within the order Diptera (two wings) it is in the family Tipulidae. There are more than 4,000 species of crane flies worldwide (1,500 in North America). Though many look like a mosquito on steroids, there are crane flies that actually are mosquito-sized (and have been given the nickname “bobbing gnats”). They are most often seen on window screens and sides of buildings. Despite their alarming appearance, crane flies neither bite (fore end) nor sting (nether end) (though an ovipositor may look like a stinger). Adults of some species eat nectar, and adults of other species eat nothing. The BugLady is always startled by their long faces. Like the other members of the Order Diptera, the Flies, crane flies have two tiny, stemmed knobs called haltare on their thorax. Actually a vestigial second pair of wings, haltare are used for balance. And, there are wingless crane flies that occur on snow in mid-winter and are the largest land invertebrates in the Arctic!

The green crane fly is about a half inch long; the body of the Giant Eastern crane fly (Pedicia albivitta), of the Frank Lloyd Wright-type wings, is 1 ½ inches long and its leg-spread is impressive. Some tropical species may more than double that. Despite the long wings, they are not strong fliers. 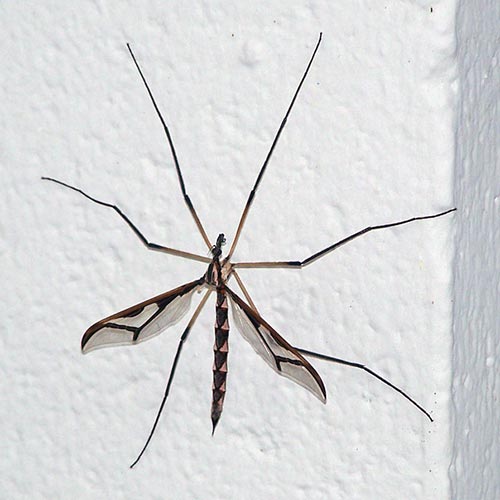 The crane fly larvae of the BugLady’s acquaintance are aquatic, and in fact are among her favorite aquatic critters. Aquatic larvae are gray and plump and pinkie-finger-sized, with bristly ridges ringing some of the segments. Their posteriors are decorated by tiny fleshy projections called spiracular lobes that look like tentacles and they have a face only a mother could love. Aquatic crane fly larvae eat decaying vegetation or small invertebrates and are moderately tolerant of pollution. In the Arctic, aquatic larvae are an important food for shorebirds.

But the larvae of some crane flies are terrestrial (yet others like damp-lands and even compost heaps), and these chew on the roots of grasses and tender, young field crops. The necessarily tough skin of terrestrial crane fly larvae is what has earned them the nickname “leatherjackets.” 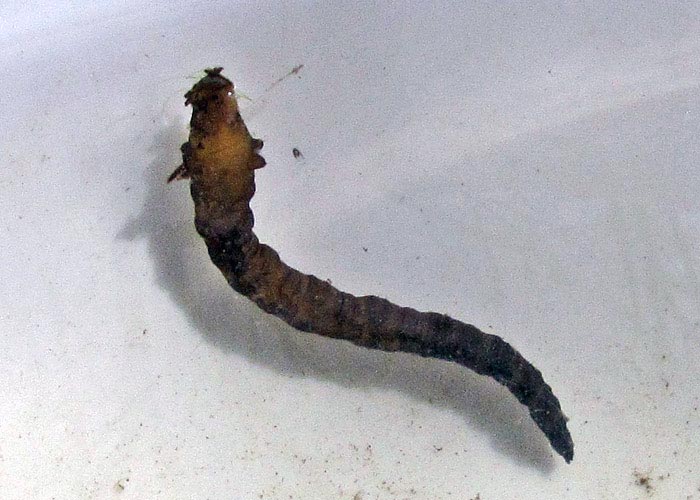 The Texas A&M Extension reports that large numbers of adult crane flies can be a nuisance indoors, but they’re medically harmless and not generally considered a pest. But the Washington Sate University Extension is not so sanguine. They label the larvae of the Large European crane fly, unwelcome guests in this country since before 1955, as “Wanted For: Menacing Lawn Owners, Assaulting Turf” and they go on to say that “Leatherjackets are below-the-belt villains, attacking both the roots and tops of grass blades in the spring.”

Two good websites: The Carnegie Museum of Natural History has a remarkable set of pictures of all manner of critters chowing down on crane flies. The Island Creek Elementary School in northern Virginia has a wonderful site with write-ups about a variety of organisms. The write-ups include charts showing relationships among eaters and eatees. What’s not to love about a website whose motto is “This Site is Always Under Construction!!” The BugLady trusts that alert BugFans can scroll down the list of organisms and find crane flies.

According to folklore, crane flies have some of the most potent venom in the world, but they aren’t dangerous to us because they don’t have biting mouthparts.