Instar—the feeding stage between molts in an immature insect.

The New Year has arrived and with it, seed catalogs. Gardeners, like women in childbirth, think mistily of the fruits rather than the labor. Here are three moths that applaud our gardening efforts (alas, the chief contenders for the BugLady’s patio tomatoes are chipmunks, not bugs). Those who don’t want to share can find a lot of information about pest control on-line and at your local Agricultural Extension office.

If you don’t look sharp, a bite of late-season sweet corn can be a two-fer—a carb and a protein in one buttery mouthful (the BugLady respectfully refers BugFans to the recent episode about Entomophagy). Corn Earworms (Helicoverpa zea) (Zea refers to the scientific name for corn and maize), in the Owlet moth family Noctuidae, are as fond of corn as we are, but some of their aliases—Tomato fruitworm, Vetchworm, Bollworm, and Sorghum headworm—show the range of plants that they feed on. CEws eat a variety of field crops, some of which, like sorghum and lettuce, are favored, and others, like spinach, broccoli, legumes, and squashes are secondary hosts. They may damage fruit and flower crops, too. In the wild, they live on various species of wild geraniums and legumes, and adults nectar on flowers. More than 100 species of insects feed on the caterpillars, including one called the Insidious Flower Bug (Orius insidiosus), a tiny bug that is known to pursue early stages of CEw caterpillars but that also painfully and almost invisibly bites humans.

The CEws’ summer range extends throughout North America almost to Alaska and northern Canada, but their larvae are not very hardy; they can’t overwinter north of a line from southern New Jersey through Kansas and so must migrate back every year. In fact CEws are great travelers, moving short distances within crop fields and greater distances flying nocturnally, with the wind, about 40 feet above the ground. Large groups of moths engaged in longer migration flights may fly a half-mile or more above the ground and cover 250 miles. Humans, via shipments of corn ears, assist in the dispersal of the larvae.

How does a larva get onto the corn? A female CEw sends out a pheromone signal which the male follows, but if she cannot detect corn silk in her neighborhood, she won’t develop pheromones at all. Up to 35 eggs per day (as many as 3,000 per female) are laid on corn silk and corn leaf hairs. Emerging caterpillars must make a hole in the egg large enough to squeeze their head through, and they line the hole with silk to help the rest of their body slide out. Once they’ve exited, they eat the egg and then start in on the corn plant. Caterpillars may feed communally on any part of the plant during their first few instars (which is considered the more destructive phase of their lives); older CEw larvae concentrate on the kernels, where they will kill and eat the competition—their brethren. They pupate in the soil below the plant and can enter diapause (a state of suspended animation) to wait out unfavorable climate conditions.

In the “Virtues of Chaos” category, the BugLady thinks that this lovely green-eyed moth that has been languishing for four years in the X-Files folder is an adult CEw.

You get remarkably different results when you Google “Five-Spotted Sphinx Moth” (the adult) than you do when you look up its notorious offspring, the Tomato Hornworm. The Five-spotted sphinx (Manduca quinquemaculatus) (five spotted) is in the same moth family, Sphingidae, as the White-lined sphinx that had such a dramatic population boom here in the fall of 2013. The gray-to-brown Five-Spotted Sphinx Moth is spectacular, with a four-plus inch wingspan, five spots on the abdomen and what looks like a snake head on its thorax. 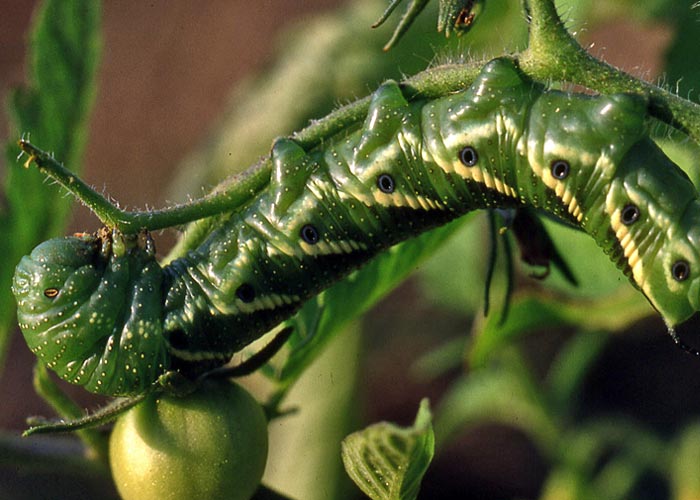 THws caterpillars can be found in gardens and agricultural fields in the eastern half of North America. The three-to-four inch larva is both dramatic and well-camouflaged, and it can be told from the closely related tobacco hornworm by the chevron-shaped markings along its sides and by a dark/black horn (the tobacco hornworm has simple white slashes and a red horn). Both species defoliate plants in the Nightshade family, Solanaceae (tomato, tobacco, potato, eggplant, etc.) (tobacco hornworms are adapted to metabolize the toxic nicotine and use it as part of its defense arsenal, but that’s a different story), and the caterpillar is said to consume as much in its final instar as in all of its previous instars combined. Adults visit tubular flowers like Bouncing Bet and petunias in late afternoon and early evening.

Females lay eggs on leaves—usually on the bottom surface. The eggs hatch quickly and the caterpillars feed for about a month before dropping down to pupate in a burrow in the soil. There are two generations per year up here in God’s Country and more than that to the South; the final generation of the year overwinter as pupae.

Planting marigolds around your tomatoes is one way to deter THws. Far more fun is nocturnal hand-picking, aided by yellow/amber filtered goggles and a UV light. The tomato foliage will look deep red/orange and the caterpillars bright green.

Isn’t this a dynamite moth! Alas, both its common and scientific names, Squash-Borer Moth (Melittia cucurbitae) (cucurbit is Latin for gourd) tells us what its larvae are up to. The SBM (not the “smiling by myself” communication acronym) is in the Clear-wing moth family Sesiidae, many of whose spectacular day/dusk-flying members are wasp mimics (an unrelated bunch of moths, also called clear-winged moths, includes the hummingbird moths in the Sphinx family. Both groups have scale-less, transparent areas on their wings). Sesiid caterpillars love to bore in wood or in plant stems, and the SBM’s stems of choice are melons, squashes, cucumbers, pumpkins, etc. (adults drink nectar). They are rarely a pest in large agricultural situations where pesticides are used, but they can be a scourge to home gardeners. 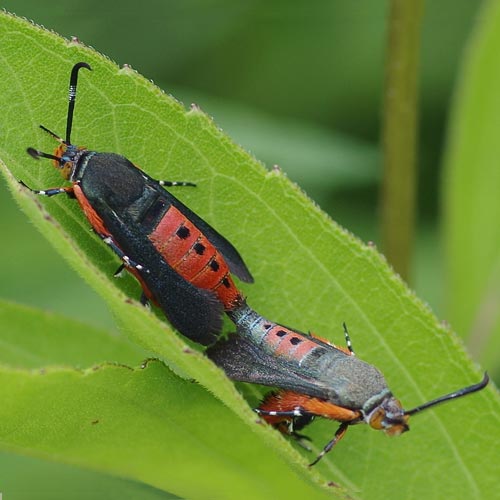 As plants begin to bloom, the female zigzags around a field, laying eggs on stems, leaves, vines, petioles, and at the base of the plant, and the larvae that hatch toward the top of the plant make their way to the base before entering the stem/vine to feed. They interrupt the flow of nutrients and water, causing the vine to wither, and by the time the withering starts, it’s too late to do anything about it (watch the stem for holes plugged with frass instead). They feed within for a month, growing to an inch or so in length before leaving the stem and burrowing a few inches into the ground to pupate in a cocoon they spin of silk. In the wild, SBMs use wild members of the gourd family, and they’ve been seen on milkweed.