Corn was developed in the hot and humid climes of Central America more than 5,000 years ago. By the time the Pilgrims claimed New England, some 4 ½ millennia later, the parent plant’s inch-long seed head with its individually-husked kernels had been genetically engineered by Native American plant breeders into 18-inch-long blue corn that could grow in the arid American Southwest, field corn that tolerated the short growing seasons of the Northeast, and a bunch of other variations in between. Corn, along with squash and beans, was one of a trio of staples that tribes of the Iroquois Nation called the Three Sisters. The Native Americans taught their pale, new neighbors how to plant it using the water-conserving Mound system. In recognition of the competition, the Settlers planted four seeds in each mound—“One for the Blackbird; one for the Crow; one for the Cutworm; and one to grow.” The stars of today’s BOTW like corn.

The “dingy” Dingy Cutworm Moth (Feltia jaculifera) refers to appearance of its drab caterpillar, not to the spiffy adult. The BugLady is blithely calling this a DCM , though there is a complex of at least a half-dozen species that blend into each other across the continent and are well nigh impossible to tell apart. In one study, scientists used Electroantennography (!) to analyze male response to female courtship pheromones across Canada. Although the moths themselves are indistinguishable to our eyes, female DCMs in overlapping populations produce distinct pheromones which only “their” males respond to. See a male DCM’s jagged antenna. At this point, Feltia jaculifera is considered a single species. As the great biologist William T. Keeton used to say, all this taxonomy stuff is fascinating only to us—the plants and animals already know who they are. 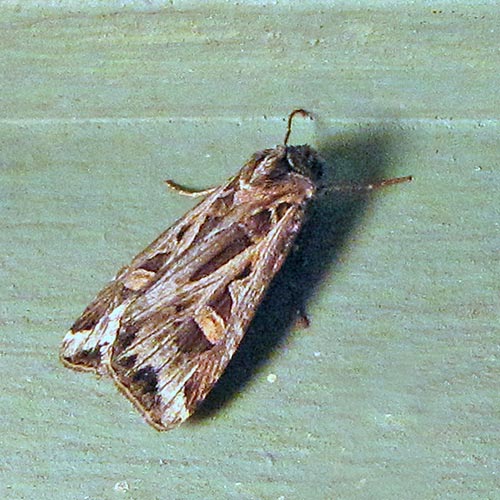 DCMs, which are also called Bent-line Darts and Bright-striped Darts, are in the Owlet Moth family Noctuidae. These moderately-sized moths (1 ½” wingspan) occupy gardens, grasslands and other open spaces from sea to shining sea and well into Canada.

Adult DCMs fly at night throughout summer and fall, resting and nectaring on flowers in the aster/daisy/composite family (or under porch lights). DCM eggs are laid by late August on clovers, dock, members of the aster family, and a number of agricultural crops like alfalfa, tobacco, wheat and corn. DCM larvae are generalists. The larvae feed, spend the winter as larvae in a state of diapause (suspended animation), and wake to eat some more in spring. They eventually rest for a while in a cell they create underground and then pupate there.

DCMs are a minor crop nuisance and are often linked in Agricultural Bulletins with the more pestiferous Black Cutworm Moth; both have population booms and busts. The cold-intolerant Black Cutworm (Agrotis ipsilon) migrates north with the spring annually; its caterpillar hangs out just above or below the soil surface (depending on the soil moisture); there it feeds by severing the young, growing corn stalk. The resident/non-migratory DCMs are primarily leaf feeders that do some damage in early spring when the caterpillars reemerge, but plants are often able to recover without any loss in yield.

Picture-Winged Flies, on the other hand, prefer their corn on the cob. The BugLady thinks this is Chaetopsis massyla, a common PWF of fresh water wetlands, a fly with no common name.

PWF larvae eat decaying plant material. Here in God’s Country, Chaetopsis massyla is a secondary invader of the stems of cattail, sedge and other wetland monocots—secondary because the PWF larva moves in and feeds on rotting tissue (and probably on microscopic decomposers in the plant tissues) after the stem has been breeched by another larva (the caterpillar of one of the Owlet moths). Congregations of as many as 40 larvae have been found in the same stalk. Not only do the larvae occupy decaying plant stems, the female also oviposits in moth-damaged stems, and the larvae pupate there.

Deep in the American Southeast, however, Chaetopsis massyla has been found to be a corn pest. Other kinds of PWFs in corn were not unknown (they are sometimes called, collectively, Corn Silk Flies), but Chaetopsis massyla’s role has only recently been discovered. Although it prefers getting an assist from a primary invader, Chaetopsis massyla is now known to initiate damage, ovipositing in undamaged corn silk and leaves as well as in holes made by other insects. Its caterpillars feed on and damage the silk and the kernels of sweet corn and field corn. It can survive on a variety of crops and weeds while it waits for corn to reappear in a field. PWF adults seem to eat decaying/bruised/fermented vegetation, too. Adults and larvae are eaten by the usual suspects—spiders and carnivorous insects like ants, beetles, and earwigs.

PWFs are pretty flies, shy and active, that like to flick their wings frequently. They run sideways when they are alarmed. The larvae are said to move out of sight quickly by, arching, grasping the tip of their abdomen with their mouth hooks and quickly releasing, causing them to whip along.

PWFs are in the fly family Ulidiidae (or Otitdae, if you’ve got an old Bug Book). There are seven species of Chaetopsis north of the Rio Grande plus two more species that are waiting to be described.