Summer reruns. Here’s an enhanced version (more fun silverfish facts) of an episode that first aired in the spring of 2009.

Silverfish, in the Order Zygentoma (formerly in the order Thysanura, with the bristletails, of previous BOTW fame), have been around for a very long time. They’re tied, in fact, with springtails for the title of “Oldest Insect Fossil” (depending on how liberally you define insects). About 400 million years.

Most insects have wings, and the ancestors of most of today’s wingless insects once had wings. Insects like silverfish are called “primitively wingless” because neither they nor their ancestors ever had wings. They do have 6 short legs and 3 body parts and segmented bodies, and although their status has been debated for a long time, they are generally considered to be a primitive insect. 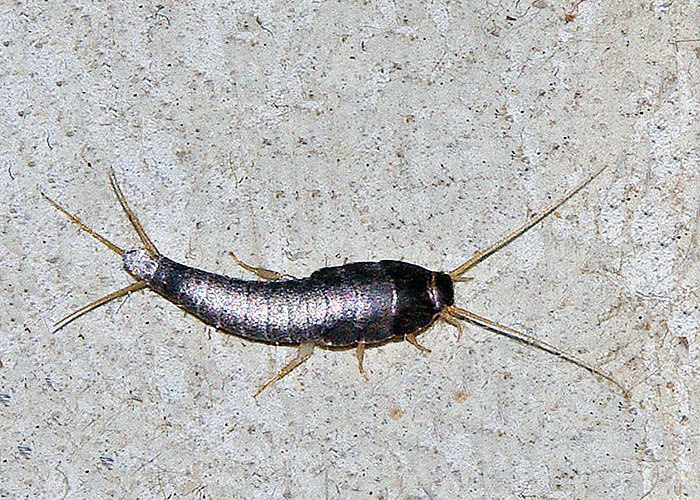 Silverfish are spindle/carrot-shaped and flat (the better to squeeze through snug spots), and their antennae and “tails” (two lateral, sensory cerci and a medial filament) are shorter than their body. They’re covered with scales that give them a metallic gray “finish” (the English call them “silver ladies”) and that detach easily when predators try to grab them. They locomote pretty fast on a horizontal surface but don’t jump or climb up walls. Sue Hubbell, in Broadsides from the Other Orders, calls them the “greased pig of bug-dom.” She says that they have a “practical form that enabled them to get on in the world, suited to the changes and challenges the world has offered.” She labels them conservative and successful, socially gregarious and “eagerly cannibalistic.” In short – they’ll probably be here when we are not.

There are about 120 species of silverfish worldwide, 18 in North America. Your common, household silverfish — the one that caused the BugLady’s Sainted Granny to store her daughters’ luggage in the garage when they came home from college — is Lepisma saccharina (“sugar-taker”), the only species in its genus in the US. It lives in damp (relative humidity 75% to 95%), cool places, preferably indoors, where it feeds on house dust, bits of dried vegetation, dandruff, sawdust, starch (which it gleans from wallpaper paste and from the glues used in book-binding), and on those small insect body parts that get restaurants in trouble. Silverfish can go without food and water for weeks, and without food for a year if they have water. Hubbell says that back in the olden days, when men wore heavily-starched, detachable collars, it was common to open the collar drawer and watch multitudes of silverfish racing for the shadows (and that a lot of what has been written about them is more than 60 years old). They are eaten by spiders, house centipedes, and earwigs.

The humble silverfish possesses an astonishing sensory system, much of which can be regenerated if necessary. According to Hubbell, it is essentially deaf and has eyes that indicate only light and dark (it prefers dark), but approximately six kinds of sense receptors in its antennae tell it about the size and shape of the spaces it moves through, along with “many other things that are unknown to us in our largely visual and aural world.” She goes on to say that it possesses “an array of chemical and tactile sensitivities so varied and precise that we… …can have no real understanding of what a silverfish’s world is like.” In addition, the “slightest change in air current sets off sensory hairs” on a silverfish’s body. As its antennae navigate the dark spaces, its tail filaments drag behind, analyzing the substrate!

Scientists have discovered that silverfish can learn their way through a maze — unless their antennae or cerci have been removed.

And then there’s its ardent courtship – a dance in three parts. Advancing and retreating, with antennae and tail filaments waving and quivering, whirling their abdomens in a torrid choreography, the male and female court, part, and resume. Eventually, he spins threads from the tip of his abdomen and encloses a spermatophore (sperm packet). At his touch, the female advances into his web, picks up the spermatophore, and uses it to fertilize her eggs. She must dance each time she lays eggs.

She lays her eggs (as many as 100) in cracks and crevices, a few at a time. If she picks a hospitable microclimate, her eggs will hatch looking like mini adults and grow slowly (extra slowly here in the North). If not, her young will not develop properly within their eggs and will die while hatching. Silverfish live several years and molt more than a dozen times (as many as 60 times, some sources say). They are unusual among insects because they continue to shed their exoskeletons after becoming adults. A molting silverfish is, momentarily, a helpless silverfish, and it might get cannibalized if one of its confreres discovers it thus incapacitated.

Yes, they are considered pests (lots of folks just don’t like seeing something moving out of the corner of their eye, or the sight of critters making a break for the shadows when the lights go on, or the sight of a silverfish exiting a plate of cookies). One source points out that repeated use of chemicals to exterminate them results in tiny silverfish corpses and body parts decomposing in the carpet, which may be allergenic and which attract carpet beetles, “and the last state shall be worse than the first.”