“House spider” is, of course, a name that’s applied to lots of different species in lots of different countries. Because they hang around human habitation, Common/American house spiders (Parasteatoda tepidariorum, aka Achaearanea tepidariorum) are one of our most familiar spiders, and Wikipedia says that “Statistically, they are the most often encountered spider by humans in North America.” They are – vocabulary word of the day – a synanthropic species (from “syn” (together) and “anthropic” (man)), a species that lives near people and benefits from that association. They are on the BugLady’s Porch Bug list. 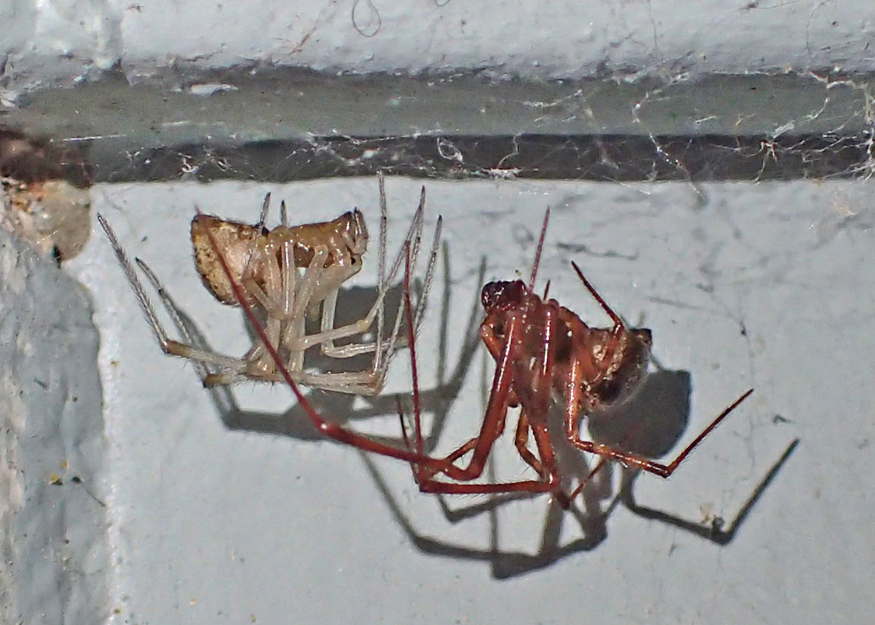 Common house spiders (CHSs) are in the class Arachnida and in the family Theridiidae, the “cobweb” or “comb-footed spiders” (comb-footed because of the spines on the lower part of the final pair of legs, spines that help them draw/comb silk from the spinnerets). They are related to the notorious Black and Brown widow spiders, but despite that, CHSs are shy, don’t take offense easily, and will run away/drop to the ground when alarmed. Their bites are painful but are not considered dangerous unless you’re allergic (or unless you are a grasshopper-sized-or-smaller invertebrate).

CHSs probably originated in South America, but they’re now recorded across most of the Lower Forty-eight, into southern Canada, and around the world, apparently hitchhiking in shipments of plants. The front pair of legs is extra-long; females, at about ¼ inch, are larger than males and are variably-colored (check out this image from bugguide.net and this image) and the dark red-orange males have smaller abdomens. According to BugFan Mike, a newcomer in town, an Asian look-alike named Parasteatoda tabulata whose abdomen is relatively smaller than the CHS’s (pea-sized vs chickpea-sized), may be more common in Wisconsin now than the CHS.

The three-dimensional webs are described as “random” and “tangled.” The spider constructs a densely-woven nook near the center of the web, in which it awaits its prey. Prey may get caught in the body of the web or stick to the extra-gluey “guy lines” that anchor it. Like a good fisherperson with a finger on the line, the CHS monitors the vibrations of the web, and if it feels a struggling insect, rushes out to paralyze and secure it. Apparently, it is able to shoot web at a thrashing insect from afar in order to get it under control before getting close.

Unlike species that spin daily, the CHS tries to maintain its web by discarding used food items, but it will also abandon a web spun in an unproductive area (they favor spots that are open to air currents). Females tolerate other females that make adjoining webs (though a neighboring female may get eaten if she strays too close). This can result in some pretty big masses of cobwebs, like the one in the water treatment plant in Baltimore that covered tens of thousands of square feet and probably held a spider population of more than ten million, more than half of which were CHSs. In the picture of the dark and the light spider, the light-colored individual has recently shed and her color isn’t set yet (thanks, BugFan Mike). 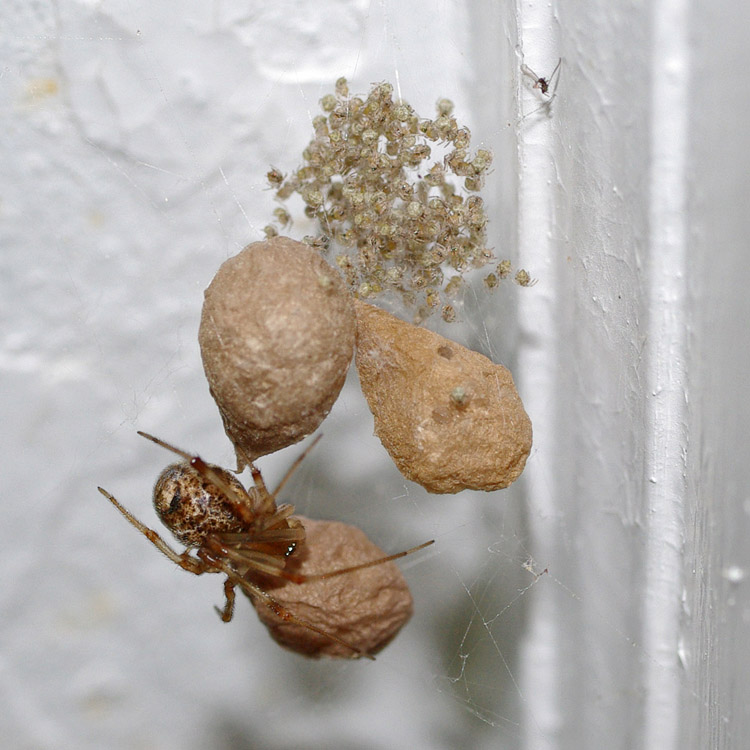 Contrary to the practices of many spiders, in which the males’ post-courtship survival depends on getting out of Dodge, fast, male CHSs are often share webs with females. After mating, females start making distinctive, tan, papery egg sacs containing 100 to 400 eggs each, and (uncommon among spiders) she may make as many as 15 of them! She puts non-viable eggs in the sacs, too – these her young will eat during the four days between hatching and leaving the egg sac. The spiderlings stay together for a few days, adding to their mother’s web, and then, after about 10 days, they disperse aerially, by ballooning. They are extremely vulnerable during this stage (the second instar) because they are very small and can only prey on critters that are even smaller, and even though they can go without eating for three weeks, mortality is about 98%. Females mature in about 40 days, and can live more than a year; males mature in about 30 days. 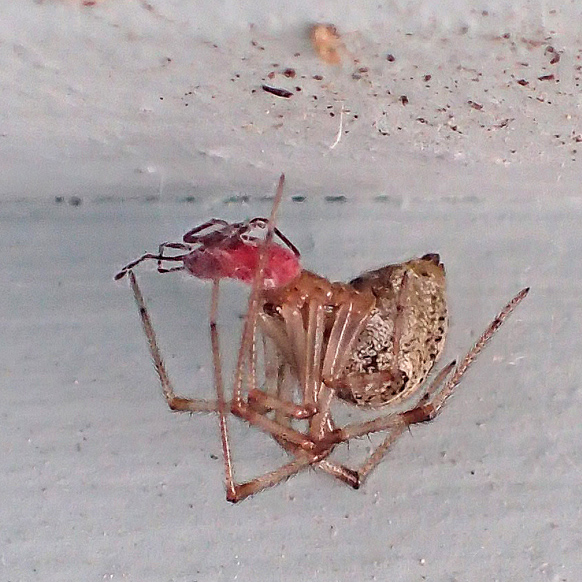 They feed on insects – mostly flies and mosquitoes – but they’ll take prey up to the size of a grasshopper, and will also eat a few species of spiders. There were several accounts of CHSs taking very small lizards that had been attracted to their webs by snagged flies. One of today’s pictures shows a CHS that has captured a daddy long-legs. Their eyesight is poor, no more than three or four inches. They hunt at night and take shelter during the day. 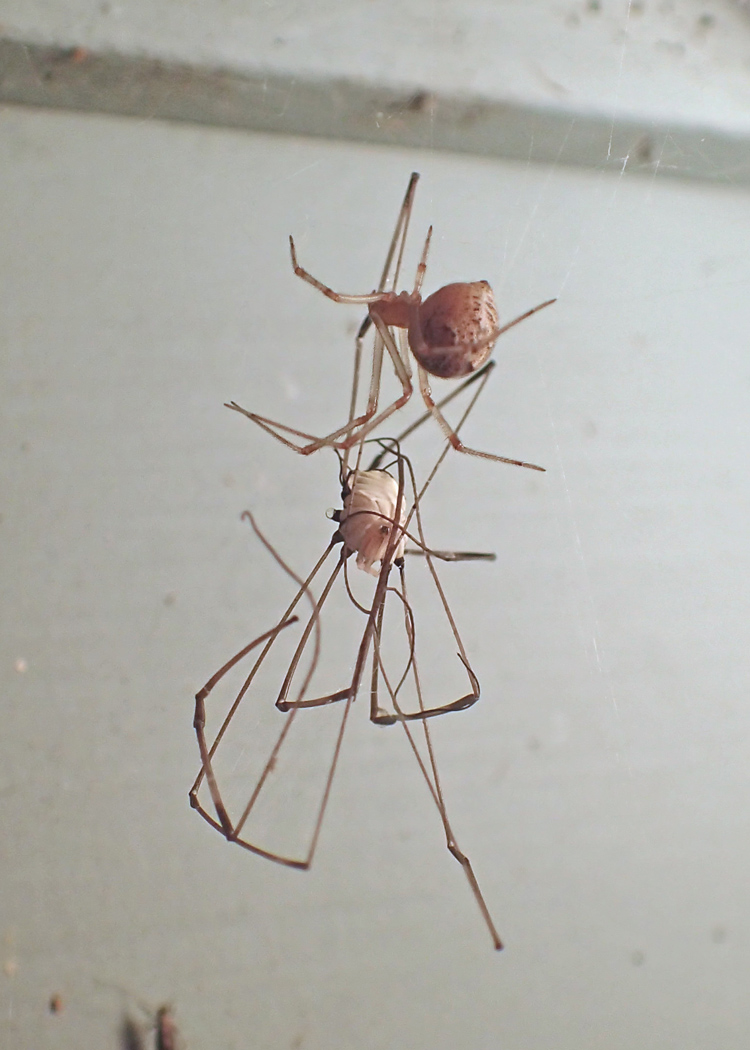 One day, a decade ago, when the BugLady was prowling around a building looking for bugs to photograph, she came upon an interesting tableaux (and photographed it badly). A solitary wasp had flown close to the corner of a window that held a CHS web. The BugLady can’t recall whether the wasp had targeted one of the spiders, was already carrying one of the spiders, or was just confused by the window. At any rate, it encountered a strand of web, a female responded, and then the second female (while the male looked on), and pretty soon they had everything wrapped up.