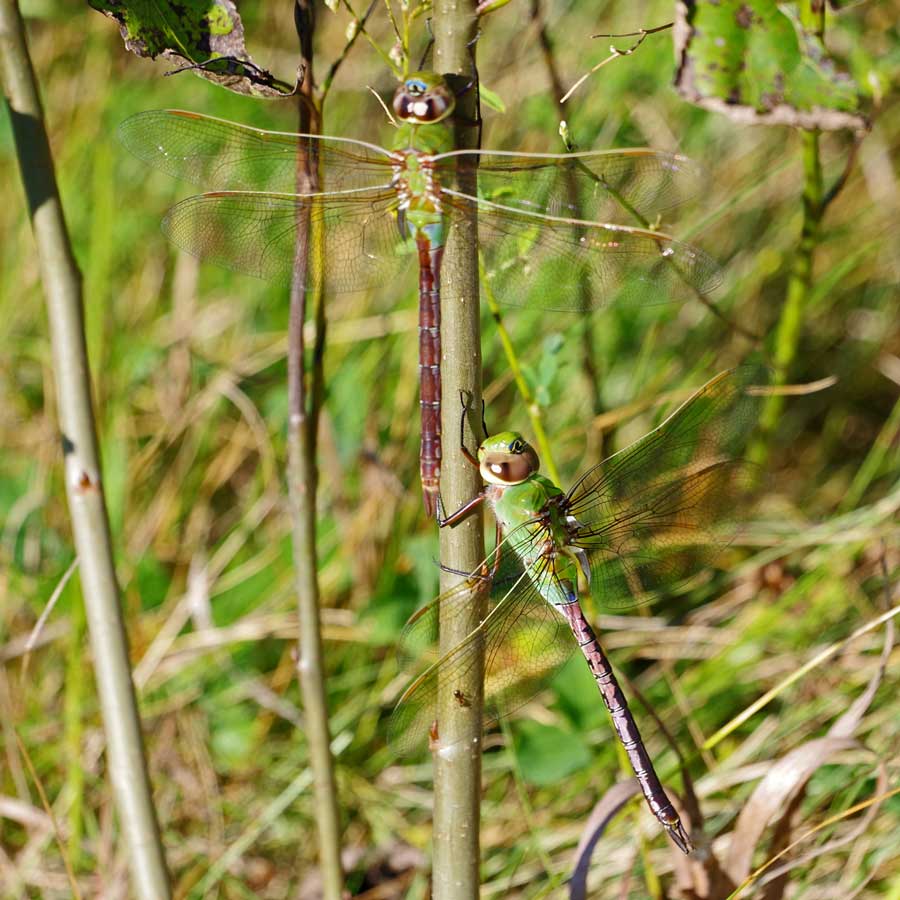 We’ve had a major emergence of migratory Common Green Darners in the past 10 days. They’ve been feeding along Lake Michigan’s western shoreline, zigzagging over the roadway and fields, socking away calories (those floodwater mosquitoes are good for something), and roosting in the cedars. Pushed south by cold fronts, they’ll cover seven or more miles a day, and it will take them weeks to get to their destination. They’re on their way, and maybe a little part of those of us who see them, goes with them. 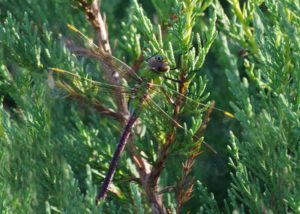 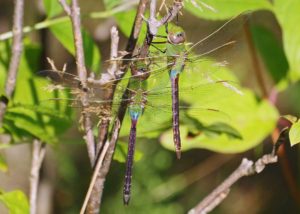 Dragonflies have been around for 275 million years. Back in the day (the Carboniferous and Permian day) some dragonfly ancestors had wingspreads of two-and-a-half feet and weighed a pound – crow-sized, according to the University of Nebraska-Lincoln’s Entomology website. There was more oxygen in the air then, and that allowed insects and other invertebrates, which take in air passively through holes called spiracles, more oxygen to nourish their cells. Think six-foot millipedes. 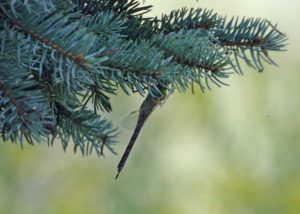 Wisconsin has two populations of Common Green Darners (family Aeshnidae), and because of that, they can be seen in our skies from May through September. The migratory crew arrives in mid-spring, fresh from their winter range in the Southeastern US, Texas, and Mexico, one of about a dozen kinds of dragonflies that migrates out of the 400-ish species in North America. They mate, oviposit, and die off, but as they do, the resident population starts to emerge from the warming waters. There’s a big difference in the phenology of their offspring (called naiads – or nymphs, if you must – but never larvae). Naiads of the migrant darners mature quickly, ready to emerge from beneath the water by late August. Naiads from the eggs of the resident population, deposited in submerged plant stems throughout summer, take about 10 months to mature. 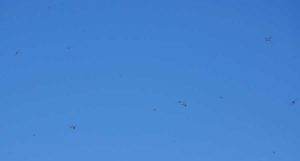 Big assemblages of Common Green Darners – swarms – may be seen from early August on, depending on the weather. An aquatic entomologist who blogs under the name of “Dragonfly Woman” collects reports of dragonfly swarms. Dragonfly Woman divides swarming behavior into low-altitude, static (mostly feeding) swarms and higher-altitude migratory swarms (and she wants to hear about both). Static swarms tend to be localized, with groups of dragonflies milling around no higher than about 20 feet off the ground. Migratory swarms are fast-moving “rivers of hundreds of thousands of dragonflies all flying in a single direction and covering large distances.” Both migratory and feeding swarms can contain a mixture of species.

Explanation: The BugLady’s first internet connection, back in the dawn of time, was dial-up, and she’s still traumatized by it (she used to start downloading a picture and go wash dishes until it was complete), so she tries not to send huge picture files. The attached “darner swarm” picture is a big file, but if you can zoom it, you can see a feeding swarm of darners glittering over a low, wet field at the end of August. How many?

At this time last year, the BugLady spent parts of three or four days on a hawk tower counting migrating raptors, surrounded by a river of dragonflies – tens and hundreds of thousands of dragonflies, from horizon to horizon, moving steadily south. It was a religious experience. Primordial. The fall dragonfly migration is no secret from the raptors, and several species of falcons grab the darners out of the air and dine on the wing. 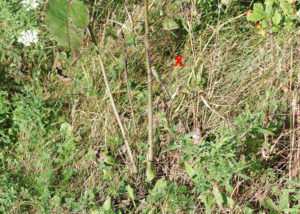 The BugLady visited Forest Beach Migratory Preserve recently on a windy day when the Common Green Darners, various mosaic darners, and Black Saddlebags did not want to be aloft; they wanted to shelter in the grasses and trees. As she climbed a low hill, darners exploded from the conifers at the top, circled, and settled back down, and it seemed like every plant stem and tuft of grass hid a few. What a thrill! She walked around the trail apologizing to the darners for kicking them up, and laughing at herself, because even though she imagines that she has a pretty good “dragonfly search image,” they almost always see her long before she sees them (and she confesses that in one of the pictures with two darners in it, she didn’t see the second until she put the picture up on the monitor). In one shot, you can scan the edge of the mowed path, as the BugLady does, except that most darners aren’t pre-marked by red “X’s.”

She has said it before and she’ll say it again – with apologies to major conservation organizations everywhere – she is more concerned about the fates of dragonflies and other insects than of giant pandas, cheetahs, elephants and grizzly bears.

Go outside, park yourself on the edge of Lake Michigan, and enjoy the show. And report your dragonfly swarms .