Common Green Darner, the Rest of the Story (Family Aeshnidae)

A common green darner was reported near La Crosse (WI) on March 24 of this year, and a few others have been seen since then (and even though the winter of 2016-17 has been “Winter Lite,” the BugLady is ready for spring and dragonflies). The BugLady wrote very brief biographies of the green darner in 2010, in BOTWs about spring dragonflies and about dragonfly swarms, but there’s much more to the common green darner story.

They are in the darner family Aeshnidae, a group of large, powerful dragonflies (“darner” because their long, darning needle-like abdomen has led to folk tales about their sewing people’s lips or ears shut).

Most of our Wisconsin darners are in the famously-confusing mosaic darner genus Aeshna. Common green darners (Anax junia) (“Lord of June”) are one of two species of Anax darners found in the state. Common green darners are, well, very common, not just here but across the country. And Central America. And Hawai’i. And Canada. And there are populations in Tahiti and the West Indies. And strong winds have blown individuals to Great Britain, China, and Russia. The other Anax, the stunning Comet darner (Anax longipes) is a rare visitor and even rarer breeder in Wisconsin.

Green darners have a 3” long body and a 3 ½” wingspan; their striking “wrap-around” compound eyes may be made up of as many as 50,000 simple eyes, apiece. They practice sexual dimorphism—both males and females have a green thorax, but males have a predominantly blue abdomen with a purple stripe, and females have a rust-colored abdomen with a darker stripe. Tenerals (newly-emerged adults) may take a week or more to solidify their adult color patterns and have female-ish coloration in the interim, and a chilly darner is a darker-colored darner. Both males and females have prominent cerci (claspers) at the abdomen’s tip. Common green darners have a characteristic bull’s-eye spot on their “forehead” that comet darners lack. They can move each wing independently, which lets them hover, and even fly backwards. They perch vertically, frequently in low vegetation, so they usually spot the BugLady before she spots them.

The long, slim, immature green darners (naiads) are found in still or very slowly-moving, shallow waters, preferably without sunfish and bass (nice set of naiad pictures). Adults frequent the air above those habitats but may be seen far from water. 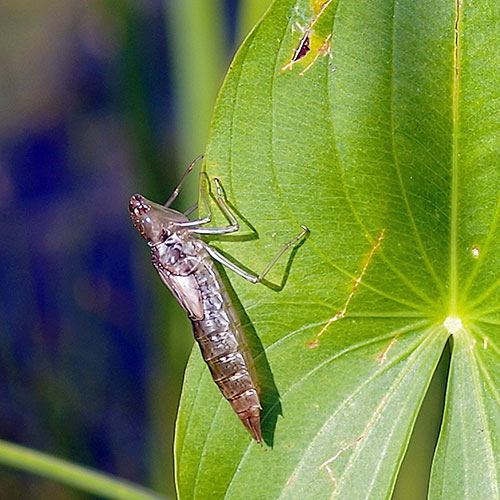 Two populations of common green darners—one migratory, the other resident—form tag teams in the air over Wisconsin. Migrants from the south arrive early, often in late April, as their prey (small, aerial insects) start to appear. They are the offspring, or the offspring’s offspring, of the darners that flew south in the fall (no, they apparently do not return to their natal ponds). “Shivering” their wing muscles to heat up the thorax allows them to be active in cool weather, and they also bask in the sun. This is so effective that temperatures as high as 110 degrees have been measured inside the thorax (which challenges the whole definition of cold-bloodedness). The picture of the female with the battered wings was taken in early July, suggesting that she was a migratory female who was reaching the end of her trail. 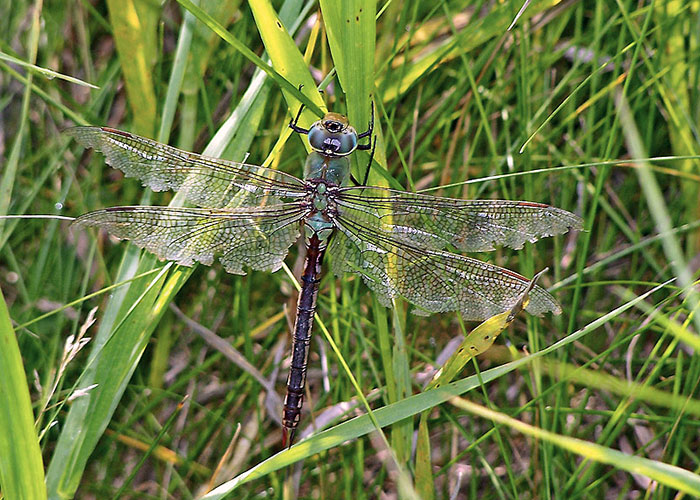 The migrants mate and die by the end of June, leaving their eggs in the water, just as the naiads of the resident population emerge as adults. These residents live a month or two as adults, depositing their eggs in late summer as the migrant adults emerge. Resident naiads overwinter under the ice in a state of suspended animation called diapause and take 10 or 11 months to mature (possibly more, in the chilly waters “Up North”), while the migrant naiads need less than half that time.

Mating commences when a male clasps a female at the back of her head in mid-air (one source said that she can reject his advances), then they retire to a perch to mate. Females oviposit in the open, in woody and herbaceous plant material below the water’s surface. 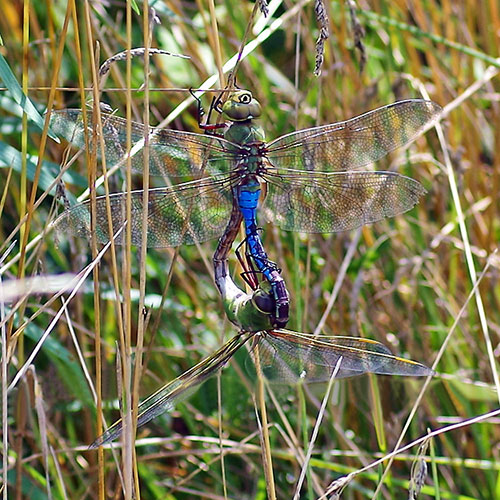 The books say that these are the only darners that oviposit in tandem. The books also say that a couple flying in tandem may be strafed by rival males. The attendant male doesn’t have many options; he may flap his wings at the intruder, shake his abdomen, land in vegetation, and even bite his challenger. According to Paulson, in Dragonflies and Damselflies of the East, females may curl their abdomen under and close their wings when under attack. The BugLady photographed (badly) an unattached male as he dive-bombed a second male whose abdomen was deeply submerged (presumably with an ovipositing female at the other end of it). 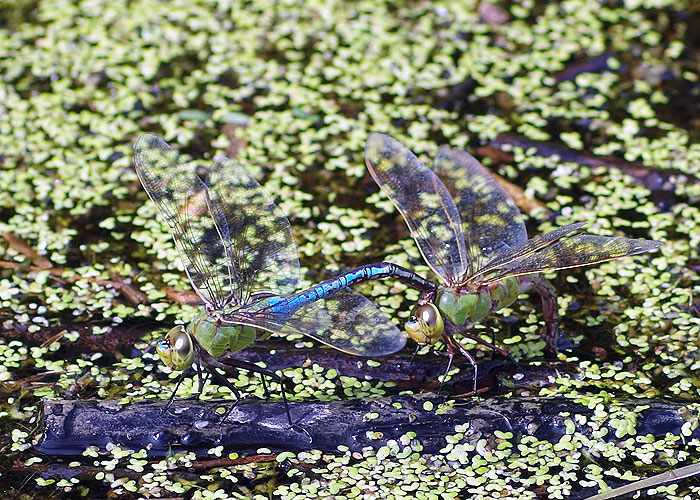 The BugLady once found a female stuck in an especially dense and sticky, dragonfly-eating patch of blanket algae. Did the female attempt to perch on the algae as she oviposited and get her wings stuck, only to be abandoned by her mate? Or, alternatively, did she get thirsty and then get stuck? Dragonflies “drink” by immersing their abdomen—water enters through the exoskeleton (the BugLady was able to fish her out with a stick). 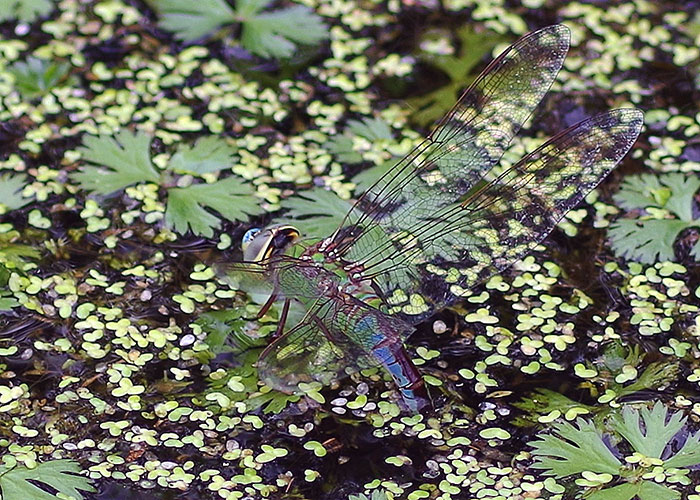 The naiads are active predators that will eat anything they can grab using their foldable “lower lip” (labium)—zooplankton, other aquatic insects (including dragonfly naiads), tadpoles, larval salamanders, and fish fry are all fair game. In his wonderful write-up of the common green darner, Kurt Mead (Dragonflies of the North Woods) muses that “If dragonfly larvae were eight to sixteen inches long, as they probably were 300 million years ago, we would dare not swim in fresh water for fear of being attacked” (read the whole account). Despite their spiny exteriors and their ability to shoot forward by expelling a spurt of water forcefully from their abdomen, they are eaten by frogs, fish, and by other aquatic insects. There’s even an “aquatic” parasitic wasp that lays its eggs in those of the green darner. Aprostocetus polynemae, apparently walks down a twig or leaf stem into the water to find dragonfly eggs.

Adults catch insects in the air and may eat them in mid-flight or on a perch. They can also pick prey from a leaf or from the ground, and they’ve been known to stake out bee hives, to the distress of the bee-keeper. At least one ambitious common green darner killed a hummingbird, and this fact is mentioned every darner write-up, though the BugLady suspects it’s pretty uncommon. Adults are preyed on by robber flies, birds, spiders, and by other dragonflies; the people who monitor the fall raptor migration tell us that the southward movement of American Kestrels synchs with that of the darners, and that kestrel migration is fueled by darners.

So, green darners migrate. Like birds, they respond to a suitable weather front—cold fronts for the southern flight and warm fronts for the far less conspicuous northern trip. The journey south may take several weeks of stop-and-start flying (averaging 7 miles a day but capable of far more, depending on the wind), and they may be accompanied by black saddlebags and variegated meadowhawk dragonflies. They migrate dramatically, sometimes in huge swarms that may take hours or days to pass a fixed point. Bluffs on the west edge of Lake Michigan are great places to catch the show at eye level. Dragonfly swarms are a late summer phenomenon, so tuck this address away for reporting swarms and contributing to Dragonfly Woman’s database.

The common green is the State Insect of Washington—so much more exciting than Wisconsin’s honeybee (and you thought the state insect was the mosquito!).

This is (drum roll) episode #450 by the BugLady’s count. From its humble beginnings in the summer of 2007.
Dragonflies