Cluster flies are, like the green flies of past BOTW fame, in the blow fly family (Calliphoridae). In general, blow flies have a reputation for being corpse-lovers, to the delight of the CSI folks, and for treading where angels would rather not. In color, cluster flies (Pollenia spp.) lack the shiny, metallic colors seen in other blow flies, and they lead a much more “sanitized” life. They hail from across the Pond, probably arriving from Europe in ships’ ballast—the method of transportation preferred by zebra mussels, quagga mussels, round gobies, and spiny water fleas, among others. 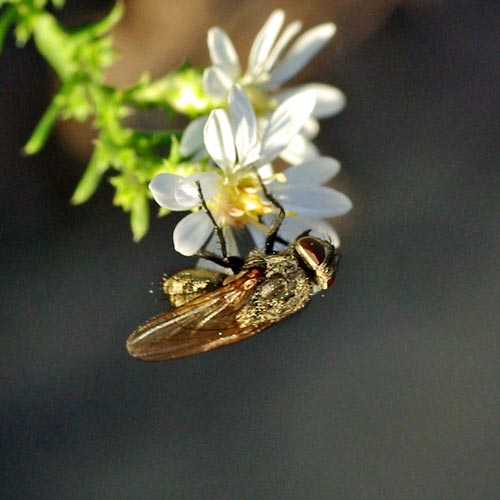 Most BugFans can identify cluster flies when they are belly-up (the flies, not the BugFans) in between the indoor and the storm window. But, when you cut one out of the herd and look at it closely, it’s a pretty spiffy fly. A little larger and chunkier than a house fly, cluster flies have golden hairs on the thorax, above and below, that make them look like they’ve been sprinkled with glitter. These tawny hairs are prominent when the flies are younger but may get worn off as they age. The abdomen is splotched with light and dark gray patches. The wings are longish and the tips often overlap in scissors fashion when the fly isn’t flying. A University of Delaware Entomology Bulletin describes them endearingly as “noisy, awkward fliers that blunder into structures, fall on their backs, spin noisily, recover and fly off.”

As their name suggests, they are gregarious, and they use scent to attract their brethren. The smell of a crushed cluster fly is described as “buckwheat honey,” and the “sickly-sweet” odor of a cluster of flies can be detected not only by other cluster flies but also by humans.

Unlike the green fly maggots that writhe over dead animals, the larvae of cluster flies are seldom seen. Eggs are laid in cracks in the soil in spring. When the eggs hatch, the pale larvae/maggots head for the nearest earthworm. They are earthworm parasites; maggots burrow into worms and eat them from the inside, out. It takes four to six weeks to go from egg to maggot to pupa to adult, and there are several generations per summer; they are active until the earthworms head south (deeper into the soil) for the winter. Adult cluster flies have a sweet tooth, preferring nectar and other sugary beverages.

In the on-line articles, the worm species targeted by cluster flies tended to be aliens, so the BugLady is not sure if the maggots are generalist worm-feeders or they just prefer worms from the Old Country. One paper discussed cluster flies and the small, red alien Allolobophora rosea (a.k.a. the Mucilage worm) (the BugLady feels that this worm should be parasitized simply on the basis of its common name). If so, maybe we should be creating cluster fly hatcheries and cheering on these potential biological controls of earthworms. More information about alien earthworms and their devastating impact on forest ecology is at Great Lake Worm Watch. Long story short, if there ever were earthworms in Wisconsin soils (no one knows for sure), the late, great glacier exterminated them (having trillions of pounds of ice sitting on the ground/plowing up the soil for a few thousand years will do that), so the post-glacial plant communities developed without them. Like most of our ancestors, the ancestors of our northern earthworms came over on the boat sometime in the past 350 years. A worm in your garden is a good thing. A worm in the woods is an evil-doer that destroys the loose “duff” layer that is a nursery for tree and wildflower seeds and a home for invertebrates. Citizen Scientists, report to: Scistarter—Great Lakes Worm Watch.

Cluster flies like to spend the winter indoors before emerging in spring to plant the next generation, and there’s the rub. By late summer, structures are under assault by adult flies. First they gather on the sunny side of a building, moving up toward the eaves at night. As the air cools, they start looking for cracks, cable holes, vents, etc. Once inside, they move upward (another common name is “attic fly”) and adjourn to upper stories, attics, the spaces between the inside and outside walls, crawl spaces, and the gaps underneath insulation. What do they do indoors all winter? They do not feed in the house or lay eggs or bite or sting or carry diseases. If you have a fly on your garbage, it’s not a cluster fly, and they are not a sign of dead stuff in your walls. They are semi-dormant, sometimes becoming active in mid-winter when the heat of the furnace reaches them.

Like the box elder bug, of previous BOTW fame, the blameless, co-habiting cluster flies are considered “pests/nuisances” and are the targets of a wide variety of control methods. The BugLady climbed up on that soapbox in the recent box elder bug episode and isn’t going to climb onto it again. Making your building as tight as possible is the most benign preventative. Most professionals don’t recommend indoor spraying (one even said that indoor spraying could result in scores of dead flies, which would attract scores of carpet beetles, which would start noshing on your household effects after finishing off the flies. The perfect storm.

Vacuum cleaners and fly swatters are basic, non-chemical, indoor lines of defense. If you are into chemicals, use of a pyrethrin-type spray on the outside walls in fall may work. The irony is that these pesticides break down quickly when exposed to the sun, which is exactly where the cluster flies congregate (as the BugLady’s daughter says—“Coincidence? I think not!”). Earthworm control doesn’t work either.

The authors of the various cluster fly articles agree that some years bring bumper crops of cluster flies and others don’t, depending on the summer rainfall. According to the experts, cluster flies’ favorite haunts include white/light-colored siding (preferably loose-fitting), exposed houses on hilltops, and buildings at higher elevations. Cluster flies apparently do not like buildings surrounded by trees because they are cooler and/or because fewer earthworms reside under the trees.