Dragonflies are absent from our landscape now, except for the occasional, well-insulated, late Meadowhawk. The BugLady misses them already, and hopes to salt the winter BOTWs with a few dragonflies as a reminder of sun and heat.

The Clubtail family (Gomphidae) includes the dragonhunters, snaketails, spinylegs, clubtails, and sanddragons. Many Clubtail species (but not all) are adorned with three noticeably-flared segments at the end of their abdomen that give them their name (a few non-Gomphids sport clubs, too). The club is more prominent in males, and they will raise the end of the abdomen to display it. They can be difficult to tell apart, and the shape of the male’s claspers is often used to differentiate them. What Clubtails have in common is that their eyes (usually green, blue or gray) do not touch each other on the tops of their heads (an arrangement that has been compared to the considerably-more-bug-eyed damselfly group). Most are medium-sized—about 2 to 2 ½ inches long—with unspotted wings and with striped bodies that use the Zebra’s strategy of disruptive coloration as camouflage. Most clubtails have a short flight period during the first half of the dragonfly season. 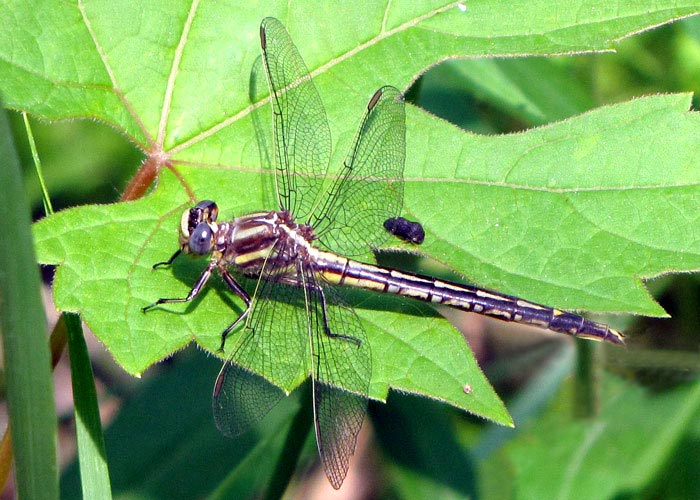 They generally rest, hunt and fly close to the ground, but they will perform vertical loop-the-loops when disturbed. Clubtails perch on vegetation while mating, but then they separate, and he does not guard her as she lays eggs. Since she lacks a real ovipositor, her eggs are simply washed from the tip of her abdomen as she inserts it in the water. Her eggs are often enclosed in a gelatinous sac that sticks to plants or rocks and keeps the eggs from being washed away. The stocky, young Gomphids (naiads/nymphs) tend to burrow shallowly into the substrate, lurking with only their eyes exposed (to spot prey) and the tip of their abdomen (for breathing). They prefer unpolluted, well-oxygenated, gravel-sand-silt-or-litter-bottomed waterways. When it’s time to assume the adult form, they crawl only a short distance from water to do so. Many species are associated with streams and rivers, but a few like still waters.

According to the Wisconsin Odonata Survey website, 34 species of Gomphids live or have lived in Wisconsin (there are about 1,000 species worldwide). Here are two species of Clubtails that the BugLady has photographed in her little corner of God’s Country.

The clubless Dusky Clubtail (Gomphus spicatus) is an Eastern/Midwestern species that’s unusual in that it prefers sand-bottomed marshy/boggy/glacial pothole lakes and ponds instead of running water. It’s an early clubtail; look for it from late spring through mid-summer in Wisconsin. The description of Dusky Clubtail behavior in Mead’s lovely Dragonflies of the North Woods fits perfectly, “When not actively engaged in oviposition, Duskies are likely found far from water, perched in the sunshine on gravel roads, trails or rocks.”

Dragonfly naiads are meat eaters, ambushing smaller aquatic critters from their burrows in the substrate. Adult dragonflies are also carnivores; Dusky clubtails feed on damselflies they encounter at the pond’s edge.

The BugLady thinks this is a Pronghorn Clubtail (Gomphus graslinellus), but BugFans Bill and Gerry have pointed out (thanks, guys) that it’s a teneral, so the ID may stall there. Teneral is a widely-used term that applies to any insect that has just shed and whose exoskeleton is, briefly (and from the same Latin root word) “tender.”  In dragonflies, it refers to the newly-emerged adult. The colors of teneral dragonflies become more intense as they mature, a process that may take clubtails a week or two to complete. Most insects don’t change color after they reach adulthood (a few kinds of insects molt as adults, but that’s really rare). The BugLady is curious about why/how dragonflies and damselflies undergo a color change at the start of adulthood (not just the teneral thing, but juvenile males of some groups start out with female coloration) and again as the adult gets older (pruinosity again). The only explanation she’s seen suggests that having female coloration saves a young male from a certain amount of negative attention from adult males. 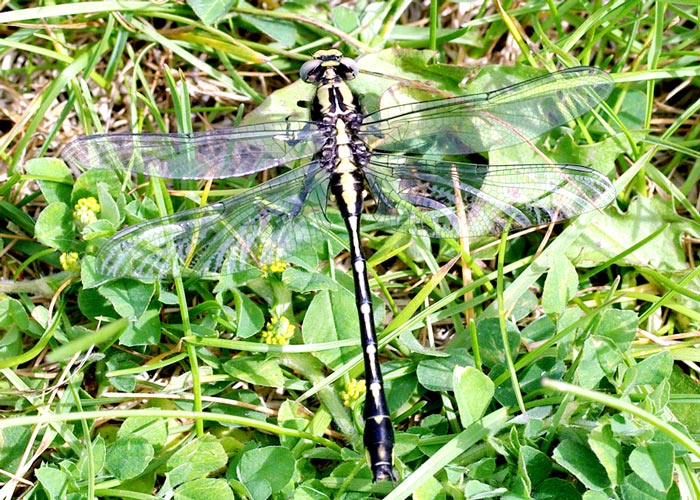 Pronghorn Clubtails range from the Midwest through the Great Plains and into British Columbia. They like lakes, ponds, and slow streams and will perch on the ground near water’s edge. They’re sun lovers, seldom flying on cool, gray days. At about two inches in length, they’re the same size as the Dusky Clubtail.

An interesting Gomphid story: zebra mussels are highly invasive mussels that were introduced to the Great Lakes in the late 1980’s when ballast water carried by oceangoing ships from Central Europe was released on this side of the Pond. ZMs are highly efficient filter feeders whose ministrations have turned water in parts of the Great Lakes crystal clear (for “crystal clear” read “absent of the tiny plankton that form the base of the food chain for a myriad of animals”). ZMs also grew in dense masses on pilings and other underwater surfaces and on water intake pipes, clogging them. A few years later another alien, the Quagga mussel, arrived in the same fashion and out-competed the ZM. QMs out-filter ZMs and can live at greater depths.

ZMs are having an unexpected impact on some species of Gomphid. ZMs travel on boat hulls and anchor chains and even attach themselves to wandering crayfish. Researchers in a few northern lakes that have been invaded by Zebra Mussels have observed Gomphid naiads with ZMs growing on their backs (the naiad stage of clubtails may last several years, giving mussels plenty of time to gain a foothold). Because their exoskeletons are effectively “glued shut” by mussel filaments on the thorax, the spot that normally splits to release the adult dragonfly, naiads crawl up on shore and die there, unable to emerge. Carrying around a load of mussels probably doesn’t help their hunting agility, either.

Another interesting Gomphid story: The Dragonhunter (Hagenius brevistylus) is a 3 1/3 inch long Gomphid that is on most Dragonfly fanciers’ “Most Wanted list.” It’s one of the species whose naiad was afflicted with Zebra mussels, but it has several other claims to fame. It’s big enough to count swallowtail and monarch butterflies and even other dragonflies among its prey, often chasing them down onto the water’s surface; its naiads have leaf-like, flattened abdomens and are well disguised in the leaf litter of pooling areas of rivers and streams they call home (and here’s a Dragonhunter teneral to complete the set); and finally, during mating, the male’s claspers, which are locked on the female’s neck, may punch holes in the female’s head. No one knows why.