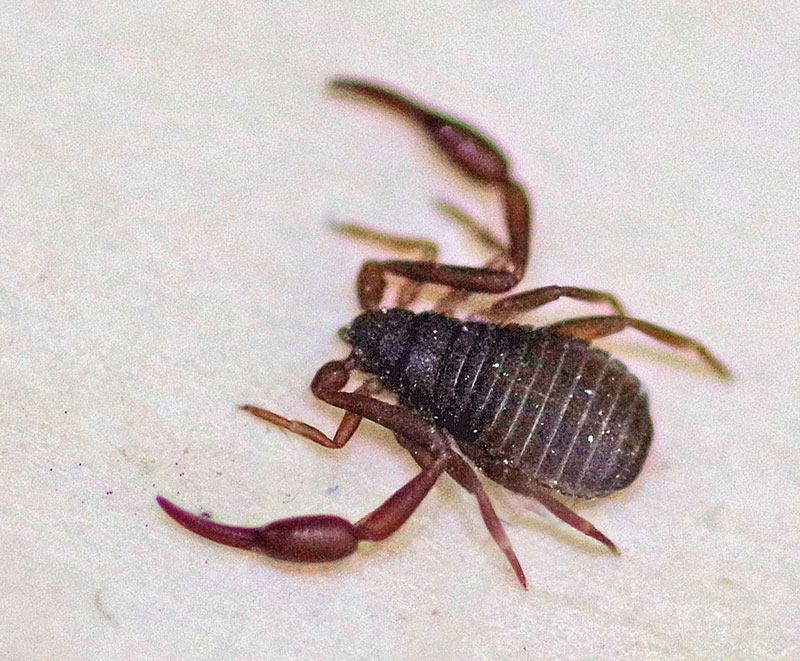 “Closed for June,” but here’s a slightly spruced up episode from 10 years ago, part of a series on household bugs. The BugLady recently found one of these little cuties in her bathroom.

Last week, the BugLady raced a storm to get the episode posted — the electricity went off four minutes after she sent it out. This week, the leading edge of Tropical storm Cristobal has already arrived to drench Wisconsin (and blow it off the map), so she’s getting an early start.

The phylum Arthropoda (“jointed legs”) is HUGE and diverse; it includes the Crustaceans (fairy shrimp. daphnia, sowbugs. crayfish, crabs and horseshoe crabs), the Arachnids (spiders, daddy long-legs, scorpions, pseudoscorpions, mites and ticks), the millipedes and centipedes, and the insects. The BugLady looks forward to seeing this exquisite little bathroom-dwelling arthropod during the warmer months, and she was pleased to discover that its life is as interesting as its appearance.

They have names that are substantially longer than the bugs themselves.  Pseudoscorpions like today’s star, the Book Scorpion, are in the family Pseudoscorpiones in the order Chelonethida/Pseudoscorpionida. There are some 300 species of pseudoscorpions in North America (2500 worldwide), and they come in both indoor and outdoor models. The species that live outside are found under the cover of bark, leaves and soil. They’ve been around for a while — fossil pseudoscorpions date back 380 million years. They were mentioned by Aristotle and were listed as “land crabs” by Robert Hooke in his amazing 1665 book called Micrographia (no, not tiny handwriting – the other Micrographia https://en.wikipedia.org/wiki/Micrographia). 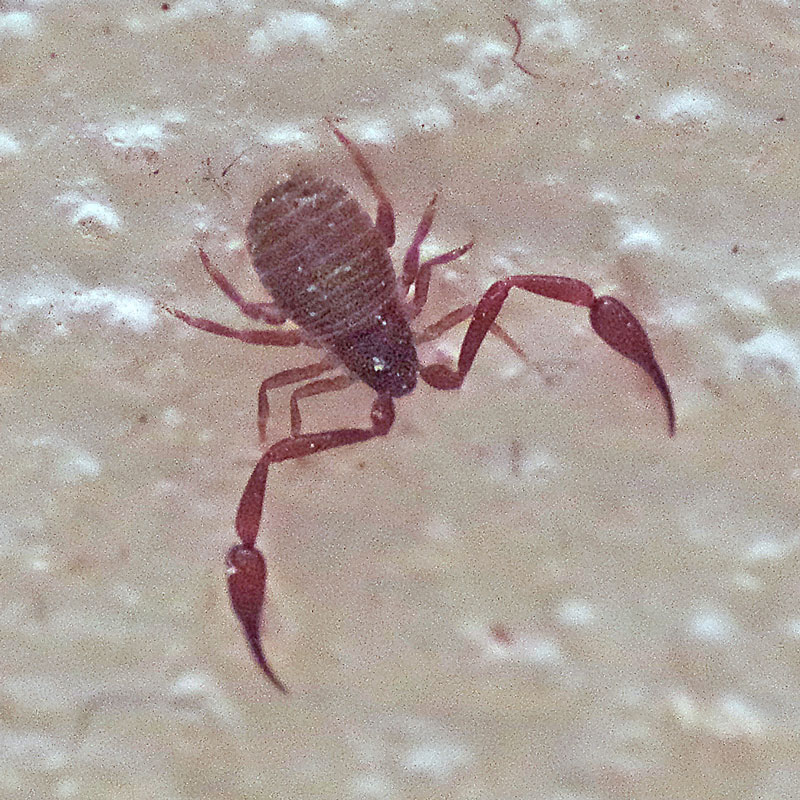 The common House Pseudoscorpion/Book scorpion (Chelifer cancroides), is one of the larger models, their bodies measuring 0.2” long. (There’s a picture of one sitting cooperatively by a ruler https://bugguide.net/node/view/966500/bgimage.) That means that you could put the eraser of a #2 pencil over one (that actually means that you could put the eraser of a #2 pencil over two of them, with some appendages sticking out at the sides). Pseudoscorpions are flat and wedge-shaped (kind of tick-shaped), and their color has been described as “rich mahogany. They have four pairs of legs on which they can walk backwards and sideways as well as forwards, and a set of “pedipalps”/pincers on long appendages that are located in front of the legs. The pincers are armed with poison to subdue their prey and are also used for fighting, for defense, and to build nests. Nota bene — no scorpion stinger at the other end. Pseudoscorpions are roughly tick-shaped, but they’re not ticks and are harmless (and even beneficial) to humans https://blogs.scientificamerican.com/running-ponies/how-book-scorpions-tend-to-your-dusty-tomes/.

With silk spun from glands on their jaws they make chambers for overwintering, for molting (a vulnerable time), and for brooding. A spider’s silk glands are at the other end. Most pseudoscorpions are eyeless, but long sensory hairs on their pincers suggest that they navigate through life by touch. They practice phoresy — that is, they hitchhike on insects in order to get from Point A to Point B. The Wikipedia entry on Pseudoscorpions has a photo, and here’s a picture of one on an Eyed click beetle https://bugguide.net/node/view/23845. Most of the specimens that get captured and turned in for identification are adults because, according to one source, older Pseudoscorpions are less agile and more likely to slide down whatever surface they are climbing up, and they find it harder to right themselves after flipping over on their back. The BugLady can relate.

Book scorpions are predators. Whether they are hanging out on the BugLady’s bathroom walls or between the pages of a book, they are looking for critters to eat.  Their menu includes flies, ants, clothes moths, carpet beetle larvae, mites, book lice, and other pseudoscorpions, and they reportedly like bedbugs.  All-on-all, nice little critters to have around.

These tiny, sightless critters have developed an elaborate life cycle. It begins with a courtship dance that may last as long as an hour.  Males create a mating territory one-to-two centimeters square, possibly using pheromones (scents) to mark its area. According to the Little Golden Guide to Spiders and their Kin by Levi and Levi, when a female enters his territory, the male waves his pincers, vibrates his abdomen or taps his legs. The couple lock pincers and pull each other back and forth. He eventually guides her to a spermatophore (sperm packet) that he has laid on the ground, and she picks it up. The female carries the fertilized eggs (about two dozen) in a silken sac/brood pouch attached to her abdomen. The young stay in the sac after hatching and consume a milk-like substance that she produces in her ovaries.  Even after they leave the sac, the young may continue to piggy-back on Mom for a while. Young pseudoscorpions molt several times over a year or so before becoming adults. Adults may live for three years — quite a life span for such a small creature.

Fun Pseudoscorpion Fact from the Remarks section in the Pseudoscorpion write-up in bugguide.net: I remember them being abundant in the chicken houses I was responsible for while growing up and I assume they must have been feeding on bird lice [Troy]

None are known to be parasitic but they feed on arthropods in bird and rodent nests. They are sometimes found on beetles or other large insects where they apparently feed on mites.

The 2019 Annual Report is available for viewing