If you look up “Icky-bug” in an insect book, it will not lead you to this beetle (“Click a”), nor anywhere else, for that matter. In their youths, the BugLady’s sisters had huge (HUGE) aversions to these blameless beetles. Consequently, the BugLady sometimes put them in little boxes and gifted her sisters with them, enjoying the resulting agitation (acts for which, alas, she feels no remorse, and yet another vignette in the formation of a BugLady).

The icky-bug is actually a Click beetle, and the long, slim shape is typical. June bugs that have flipped over onto their backs may wallow around feeling sorry for themselves for a while, but the click beetle has a spiffy mechanism for righting itself immediately. A spine extends back from the first thoracic segment and you can see a matching grove on the second thoracic segment. 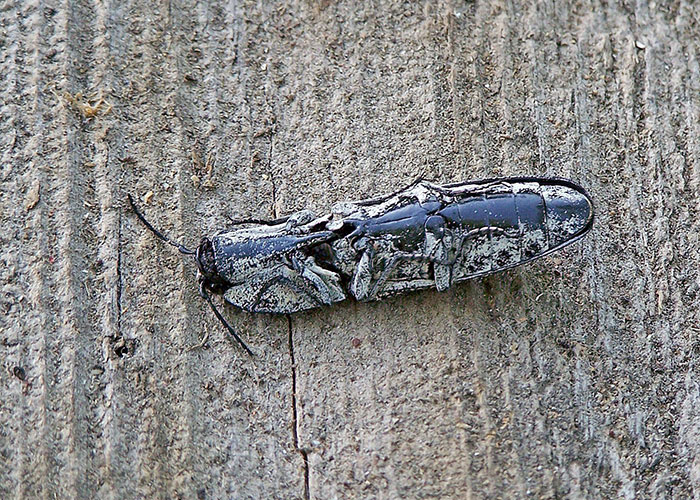 To right itself, the click beetle first “arches” at the waist, then curls, suddenly (and with an audible “click”) snapping the spur into the groove, which somersaults it into the air and lands it on its feet. In his Field Guide to Insects of North America, Kaufman says that they are also called “jackknife beetles.” The BugLady totally does not get the physics of this trick (the opposite arrangement—that the spring would be caused by the sudden release of the spine rather than by its sudden engagement—seems more plausible) but she accepts it, like pole vaulting, because the results are inarguable.

The hard-coated click beetle grubs, which may spend up to four years in that stage, are called “wireworms”. Wireworms of the genus Melanotus enjoy eating corn, potatoes, grains and grasses; other wireworms are important predators on agricultural pests in the soil. 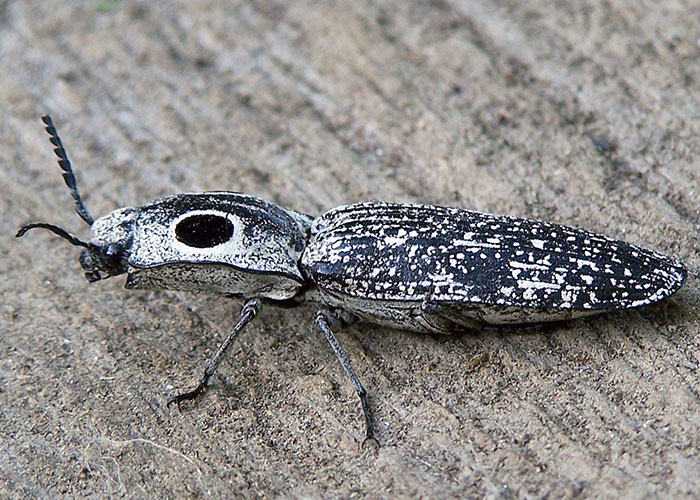 The impressive, inch-and-a half-long Eastern Eyed Elater or Big-eyed Click Beetle (Alaus oculatus) fell onto a burdock leaf as the BugLady mowed the grass nearby. Eastern Eyed Elater Junior lives in decaying wood and eats the insect larvae it finds there.