Every year in mid-summer, people ask Wisconsin birders what kind of baby hummingbird appears in late afternoon, hovering over flowers. There are multiple layers to that question, and people are reluctant to believe the answers.

First, the bird layer: Half-grown baby hummingbirds do not fly. By the time they are ready to fledge, they are as large as their parents (Screech owls are not baby Great horned owls, either) (sorry—apparently the BugLady needed to vent). Second, the insect layer: The “baby hummingbird” is invariably a moth in the Sphinx moth family (Sphingidae), a group sometimes nicknamed, of course, Hummingbird Moths. Look closely, hummingbirds don’t have antennae.

Sphinxes (which have yet another alias, “Hawk Moth”) are a bunch of big, day-flying moths that hover in front of flowers. They have large eyes and a long tongue/proboscis adapted for reaching for nectar hidden deep down in tubular flowers (the proboscis may be as long as the moth). Many Sphinxes have a spindle-shaped body. Strong flyers, they can reach speeds of 35 mph and are hard to net. Their larvae typically sport a “horn” at the rear—the familiar Tomato hornworm is a sphinx larva. 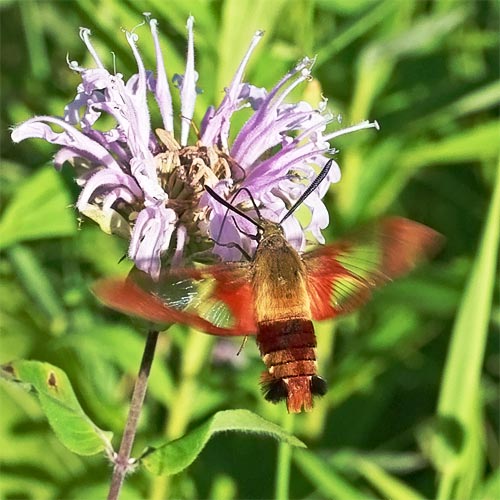 This BOTW features Hummingbird Moths in the genus Hemaris; their genus name may come from the Greek hemara meaning a day, in reference to their day-time habits. There are 17 species in the genus world-wide, but only 4 in the Americas. They are also called “Clear-winged moths,” a common name they share with yet another very spiffy but unrelated group of moths (everyone in this episode has too many names). Both sets of Clear-winged moths have sections of their wings that lack scales and are therefore transparent. So, to review: Hummingbird/Clearwing moths are a small part of the larger Sphinx/Hawk moth bunch. 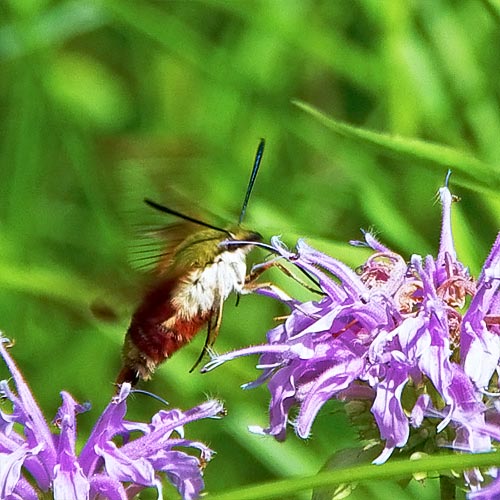 When you finally wade through all the names and see the moths themselves, they are lovely and magical, darting swiftly around flowers and teasing photographers. The stars of today’s episode are the rust-and-chartreuse Hummingbird Moth (Hemaris thysbe) (sometimes called the Cinnamon Clearwing) and the black-and-yellow Snowberry Clearwing Moth (H. diffinis) (sometimes called, yes, the Bumblebee Moth). The species name of the H. thysbe comes from the tale of Pyramus and Thisbe. There’s a blood-stained scarf involved (and an entomologist who read the classics). Look it up. Both species have a tiny “hook” at the very tip of each antenna and an abdomen that looks flattened ventrally (on the underside). Males’ abdomens end with a fan-shaped tuft reminiscent of a crayfish tail. 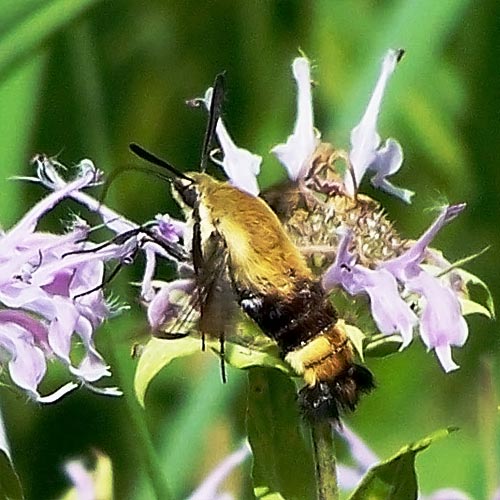 The size (wingspread about 2”), habits and even the larval food plants of these two Hummingbird moths are similar. Their range extends from the Pacific Northwest, east and south through most of the U.S. Adults hover in front of the flowers of fields, gardens and edges to sip their nectar. The BugLady often sees them working the wild bergamot which is in bloom during their flight period in mid summer. 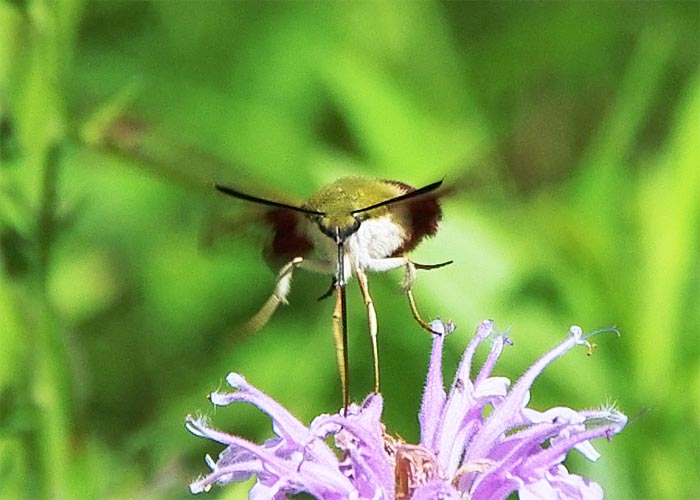 The caterpillars of H. diffinis dine on snowberry, honeysuckle, and dogbane, and H. thysbe eats the leaves of snowberry, honeysuckle, hawthorn, cherry, plum, and highbush cranberry. When they have eaten enough, they spin a thin-walled cocoon in the leaf litter on the ground and spend the winter there. They do a “clown-car” thing—the cocoon seems way too small to hold the moth that ultimately emerges.

At the risk of stating the obvious, the wonderful website bugguide.net says of one species of Hummingbird moth that it is “Beautiful, but moves so quickly it can be hard to appreciate.” The BugLady has decades of fuzzy images of Hummingbird Moths, both digital and film, to back that one up!