The BugLady found these lovely creatures all over Leadplant, which blooms in mid-season on the prairie. They are Clay-colored Leaf Beetles (CCLBs) (Anomoea laticlavia); according to the excellent bugguide.net, laticlavia means having a broad crimson stripe, which may refer to some portion of the CCLB’s anatomy that the BugLady has not inspected (Yet). CCLBs are members of the Leaf beetle family Chrysomelidae. Weevils make up the largest beetle family, but the leaf family is a big one. Something like 1,700 Chrysomelids grace North America, some of which are still in line to get names. In fact, some scientists speculate that there are almost as many leaf beetles waiting to be officially described as have already been described. 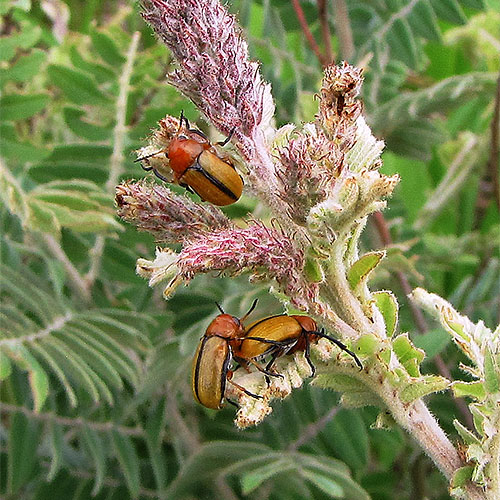 As a group, Chrysomelids come in a variety of shapes and colors (subjects for future BOTWs), and they are vegetarians in both their larval and adult stages. Adults feed in the open on leaves, stems, flowers and/or pollen (many target a specific plant or group of plants for food). According to Eaton and Kaufman, in the Field Guide to Insects of North America, some are crop pests and others were imported to control “weeds.” 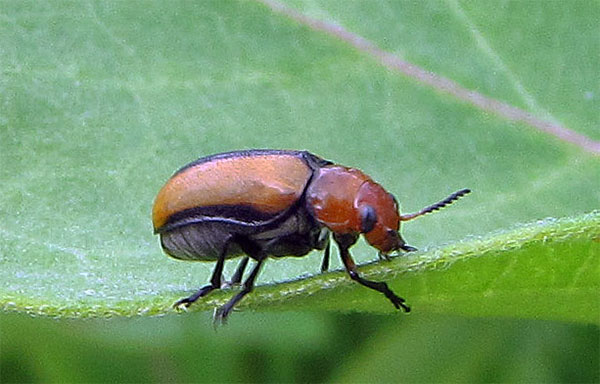 Fields and prairies through most of the eastern U.S. and north into Canada comprise the range of the CCLB. In the southern parts of their range, they’re called Persimmon Beetles. Adults and larvae favor the leaves of the legumes (Pea family), but they also eat willow, oak and ragweed (and, persimmons).

CCLBs are found in a subfamily called the Casebearers—Cryptocephalinae (from the Greek, meaning hidden head) To earn that honor, the larvae develop in a case that they construct from plant debris and fecal material (aka “poop.”). Bugguide.net has a photo, if you type the CCLB’s scientific name into their search box.

It gets better (“better” meaning—more Classical Languages). CCLB larvae also belong to a group of animals (which includes a few species, each, of beetles, flies, crickets and mollusks) that are myrmecophiles (they are myrmecophilous), which means that they are fond of/have an association with/benefited by ants. Myrmecophiles live in ant nests and interact with the ants. They may benefit the ants by scavenging on dead plants/ants/fungi within the nest or providing a food source for the ants, or they may liberate the ant’s stored food for their own use or prey on the ants themselves.