In the heat of July and August, cicadas whine monotonously from the treetops. Heard far more often than they are seen, they are commonly (and erroneously) referred to as “locusts,” named after the noisy but completely unrelated grasshopper group. When the BugLady was a naiad, she called them “Hot Bugs,” and other monikers include “Dogday Harvestfly,” “17-year Locust” and “Periodical Locust.” They are the poster child for the concept of “biological clock.”

Each species has a characteristic call which is produced by internal structures called tymbals. Two large cavities, located at the juncture of the thorax and abdomen, are covered with membranes, effectively turning them into drumheads. When these drumheads are vibrated by powerful muscles, the almost-empty abdomen acts like an amplifier for the sound (several species also make clicking sounds with their wings). A pair of auditory organs is also located on the abdomen; if all that sound is being produced, there must be “ears” to hear it. Cicadas in southeastern Wisconsin tend to be monotone, diurnal callers, while species along the Mississippi and in the south may make a throbbing sound that continues into the night. 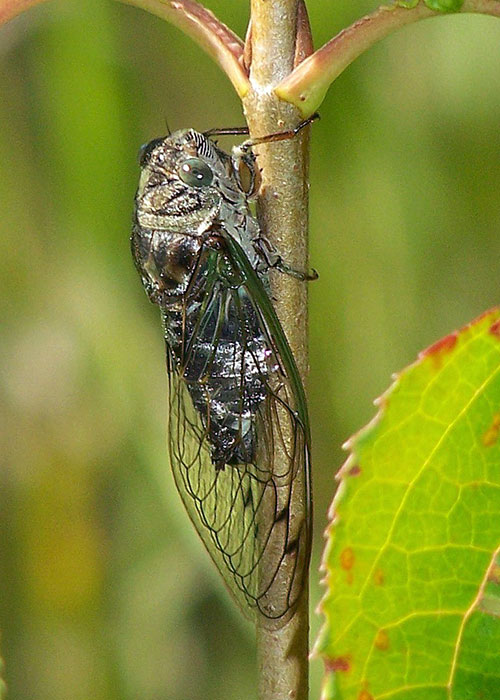 Most males emerge during a relatively compressed period of time and “vocalize” to attract females (their calls also draw competing males to the party), and anyone who has enjoyed a hot, Wisconsin summer has experienced the din. The BugLady calls this the “Normandy Beach” philosophy of reproduction—if you throw enough soldiers onto the beach, some will succeed. Kaufman, in his Field Guide to Insects of North America, mentions that some yard-care machinery sounds like cicadas and will attract hoards of females. Sounds Hitchcockian. The Rock Stars of the cicada world are the 17-Year Locusts (genus Magicicada), whose range lies barely south of us and whose predictable irruptions spawn festivals, recipe contests (the science of eating insects is called entomophagy) and modifications of the outdoor concert schedules at Ravenna and Tanglewood. 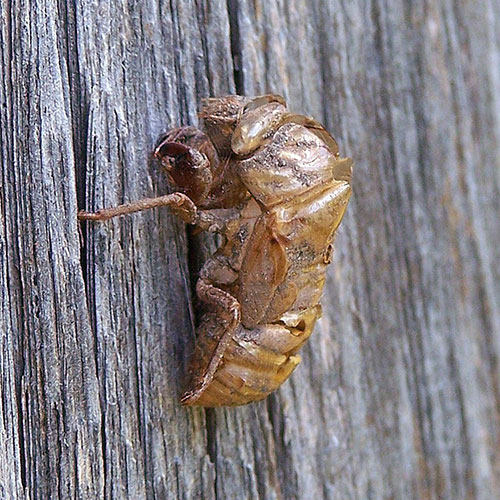 Cicadas are equally famous for the years they spend as nymphs. Ms. C. makes a slit in a twig with her tough ovipositer and inserts her eggs (often causing the twig tips to die). When a nymph hatches, it falls to the ground, burrows in, and spends its next years feeding on the sap of plant roots. The number of years it spends in the soil—pick a number between 4 and 17—is determined by its species. When the appointed time has lapsed, it tunnels up and excavates a cavity/”waiting room” just below the surface. Donald W. Stokes, in A Guide to Observing Insect Lives reports that it uses its predatory-looking front legs to excavate, rake and tamp the soil to camouflage the exit to its chamber. Under the cover of night, it hauls itself up out of the ground, appearing incredibly prehistoric, and looks for a vertical surface to climb. Once attached, it splits the skin on its back and pulls out its adult body, leaving behind an empty husk that Kaufman describes as “gnomelike.” 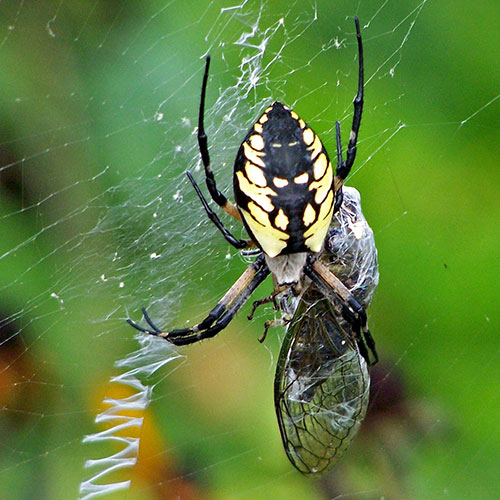 The green-and-black, bullet-shaped, one-to-two inch long adults, with their clear, stiff wings are impressive but harmless. Adults live only a few weeks, feeding on the sap from twigs. They may provide a meal for songbirds (the BugLady often hears a Hot Bug’s whine choked off abruptly, followed by high fives from a catbird or towhee), and big spiders and large, solitary “Cicada-killer” wasps may snag cicadas for their own immediate use or for the future dining pleasure of their offspring. Gulls and terns will take advantage of the emergence of the large “broods.” In the folklore department, several veins in the forewing of the adult meet to form a “W;” and “seers” claim that their emergence is a portent of war. Winner of the “Blatant Sexism Award” is the Greek writer Xenarchus, who said “Happy are cicadas, for they all have silent wives.”

The BugLady once got out of a meeting and observed a cicada that, during course of the meeting, had hiked across the driveway and up onto the tire of a fellow attendees’ car, had pulled itself completely out of its nymphal exoskeleton, and had almost completed pumping up its wings. Confirmation from the insect world that it had, indeed, been a long meeting!