So the BugLady has a story that she’s itching to tell (and she’s itching as she tells it). Here’s a rerun from 2010 that will explain.

Today’s “bug,” the chigger, is one with whom the BugLady has a long history that began some 45 years ago in southern Ohio and continued in sunny Texas (after a few years there, the BugLady was so sensitive to Texas chiggers that each bite caused a red spot some 3 inches across. People stared). Chiggers are the wee larvae of members of the mite family Trombiculidae, and they are critters whose larval stage is far better known than the adult stage. According to Wikipedia, “The best-known species of chigger in North America is the hard-biting Trombicula alfreddugesi of the southeastern United States, the humid Midwest, and Mexico.” Chiggers are in a different family than the lovely red velvet mites (family Trombidiidae), but are in the same order (the BugLady got that wrong in the first version of this episode). Red velvet mite larvae only bother fellow arthropods. Both are in the spider class Arachnida and are not insects, and chiggers are not chigoe fleas/jiggers, a subtropical sand flea.

Home on the Chigger’s Range

Chiggers are said to live in dry or damp, forest or grassland, in dense or sparse vegetation, worldwide. Their love for shade and damp is debatable, and the BugLady has most often encountered them in dry, long grass. They don’t particularly like mountains or deserts, and in North America, they prefer the Midwest and the Southeast. They are happiest when the ambient temperature is 77 to 86 degrees F. A sun-warmed rock whose surface temperature exceeds 99 degrees F is too hot to harbor chiggers; conversely, they become inactive at about 60 degrees and die when it dips below 40 degrees. Chiggers are not spread evenly over the landscape; rather, suitable habitat will have areas that are chigger-free abutting areas that are thick with them. They were not an issue here in God’s Country when the BugLady returned to her natal turf, 40 years ago, and the BugLady blames their increasing presence on Climate Change (a small prairie near her home is famous for them).

So, what’s the problem? They bite, that’s what’s the problem — persistent, red, itchy bites! Although chiggers do not transmit diseases (in this country), their bites do cause intense itching that lasts for days. There’s a potential for the bites to get secondary infections due to excessive scratching, and some unlucky people get a rash (called Trombiculidiasis, of course) on the sunlit portions of their skin due to bites in the shady parts. Chiggers sometimes stop under a sandal strap or on the back of your knee, but the majority latch on in the snug areas where elastic meets skin, so they typically excavate in places your mama told you not to itch in public. 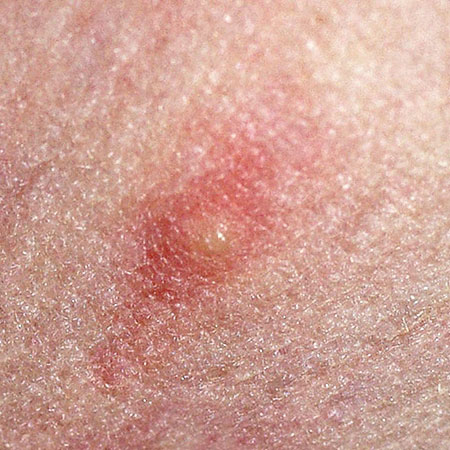 The old theory about chigger bites, passed on from generation to generation, was that Ma Chigger bored in, deposited eggs, and died. The larvae moved around under your skin, drinking your blood and causing the itch (the unrelated, tiny, southern jigger/chigoe flea does burrow and suck and itch, mainly on the soles of your feet—another reason to keep your shoes on down South—and according to Wikipedia, the black spot in the center of your chigoe flea bite is the tip of the flea’s abdomen and her back legs as she feeds, head first). Applying nail polish to the bite (clear or the hue of your choice) to smother the chigger is a probably ineffective but thoroughly entrenched folk remedy. Likewise, dabbing the bite with household/workshop chemicals/combustibles like bleach, kerosene, ammonia, alcohol, turpentine, or dry cleaning fluid won’t deter the chigger. It is also untrue that women and children are chigger-magnets and men aren’t; men’s somewhat thicker skin makes them harder to bite.

What are they really doing in there? Chiggers use their mouthparts to excavate in skin folds or depressions, often in pores or follicles. After piercing the skin, they inject enzymes that start digesting cellular material. They don’t have a long, sucking mouthpart but, ingeniously, your body makes one for them. Your body protects itself from the chigger’s “saliva” by hardening the skin around the puncture into a tube called a stylostome (visible as a small red spot in the larger bite area). The chigger inserts its mouthparts into the stylostome to extract its meal https://en.wikipedia.org/wiki/Stylostome. As long as the chigger keeps pumping in the enzymes (for 3 to 4 days), your body keeps forming the stylostome. It is your reaction to the stylostome that causes the itch, and the itch goes away when the stylostome falls out or is absorbed, days after the larva itself has dropped off.

Chiggers—A Year in the Life

Ms. Chigger lays her eggs in fall, and the eggs hatch in spring. The resulting parasitic larvae are, indeed, almost microscopic — according to one source a single-file queue of chiggers contains more than 100 per inch. They are naturally reddish in color, but not from sucking blood (after a big meal, a chigger is yellowish). The fast-moving larvae (one source times them at 15 minutes from ankle to beltline) soon head for high ground to wait for their meal-ticket. Ironically, the chigger that bites you would have preferred a bird, small mammal or reptile; chiggers that land on humans are unlikely to complete their life cycles because they get scratched/rubbed off and can never initiate another meal. After its big feast (its only meal as a larva), it drops off and falls into a post-feeding stupor and turns into a nymph. Adult chiggers eat plant material and prey on tiny arthropods in the soil and don’t bother humans.

A variety of chemicals can be applied to the lawn. For personal use, standard insect repellents (DEET) are effective, but they must be renewed every few hours. Repellents made with permethrin should only be applied to clothing but are potent for several days. Yellow Sulphur powder has been available in drugstores as “Flowers of Sulphur” or sublimed Sulphur” (unless multiple government agencies are protecting us from it these days). Texans used to make effective “Sulphur socks” by pouring Sulphur powder into the toe of an old sock and knotting (or twist-tying) the top. Before heading out into the field, they whacked the sock against their shoes and pants cuffs. It is a skin irritant for some, and Sulphur smells like, well, Sulphur, so you may be welcome only in the presence of other Sulphur-wearers.

You can do a chigger survey by placing a saucer or some six-inch squares of black cardboard on edge in suspect territory for 10 minutes or so. Then check out the top edge with a hand lens, looking for miniscule yellowish critters. If you determine that you have chiggers, do some creative grounds-keeping. Mow the grass short, remove brush, and make it unattractive to small, chigger-bearing animals.

If you’re outside, avoid known chigger hang-outs (see chigger survey, above) and don’t spread your beach towel on the ground in chigger country or you’ll get more than a tan. Dress for success — loose clothing, long sleeves, pants tucked into socks or boots.

Scrub down in a warm, soapy shower ASAP, and launder your field clothes (hot water) before reusing (chiggers will linger on un-laundered clothes). If you’re far from civilization, rub down briskly with a washcloth to remove most of them.

The edge can be taken off the itch by over-the-counter remedies like Calamine lotion, cortisone concoctions or Benzocaine. Some say that the venerable nail polish treatment seals the bite off from oxygen and lessens the itch somewhat, and that the presence of the nail polish might remind you not to scratch. Happily, chigger bites go away all by themselves in a week-ish.

Larval chiggers are tiny indeed, but the BugLady, who dabbled in photomicroscopy in college, managed to take these shots. Or there’s this: http://bugguide.net/node/view/120650.