The BugLady added the American Lady butterfly to this episode, originally posted in 2010, about Painted Lady butterflies.

The Painted Lady (Vanessa cardui) is a lovely, unpredictable summer visitor here in God’s Country. Also called the Thistle Butterfly and the Cosmopolitan, it can be seen in temperate areas on five continents and may have the biggest range of any butterfly. Not only does it live in a lot of places, it migrates to even more Invasion of Painted Lady Butterflies predicted. Consequently, it is a very popular butterfly about which much is posted on-line (lots of sites about rearing them, too), and it is a butterfly with fan clubs and a research site (visit the Vanessa Migration Project and find out how your observations as a Citizen Scientist can add to our knowledge about theVanessas). 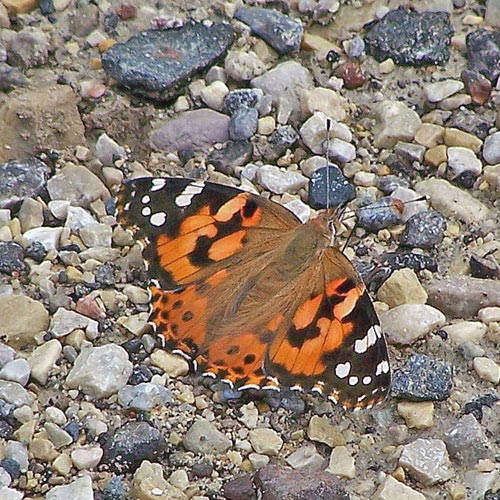 Painted Ladies are members of the Brush-footed butterfly family, Nymphalidae, a large group of (usually) medium-sized, often orangey butterflies. The Nymphalids are called “Brush-foots”—their front pair of legs is so reduced in size that they only use the back four feet to walk/stand on, and the vestigial front legs are tipped with bristles/brushes instead of feet (the bristles are sensory and incorporate the senses of smell and taste). There are about 6,000 Nymphalid species worldwide. Here in the Lower 48, the genus Vanessa includes the Red Admiral (which has its own BOTW), the Painted Lady, and the American Lady, all of which wander, and the West Coast Lady, which pretty much doesn’t.

Look for Painted Ladies in open, sunny areas—fields, road edges, gardens, dunes. There the adults sip nectar, especially from thistle and clover flowers, and males defend their territories from perches. They also extract minerals from clay using their proboscis. Painted Ladies fly north in mid-spring and there are probably two broods per summer here. Eggs are laid on caterpillar food plants like hollyhock, nettle, and lupine, plus thistle and many other plants in the aster family (its catholic eating habits explain its five-continent range). The solitary caterpillars conceal themselves on their food plants in a tent of silk. When they are ready to pupate, they hang upside-down from a leaf, using a silk fastener, and there they form a chrysalis.

There’s a good deal of discussion about the “cold-hardiness” of the Vanessas. It’s agreed that it’s too cold here for any of the life stages to overwinter, though American Ladies are said to hibernate in the Southern U.S., and the Iowa State site reports that adult Red Admirals overwinter in hibernation almost as far north as New York State. And throw in Climate Change. Stay tuned.

Painted Ladies fly year-round in the southern and western U.S. and Mexico. They are seen in Wisconsin in small numbers every summer, but some years, when southern populations boom or the weather conditions are right, Painted Ladies head north in dramatic flights (they’re irruptive migrants).

There are some interesting theories about a possible/partial correlation between el Nino weather cycles and Painted Lady migrations, both here and on the other continents where both the butterflies and the el Ninos occur. Some populations of Painted Ladies live in very dry or in very rainy areas. Because a series of bad/low caterpillar years could devastate such a population, spreading out to different landscapes seems like a good idea, and migration is “built-in” to the butterflies’ behavior. Storm patterns change during el Nino years, often bringing more rain to the desert. The desert responds with a spectacular array of flowers, Painted Ladies breed like bunnies, and the resulting caterpillars strip the vegetation. When those caterpillars emerge as adults, the green is gone (reduced to pieces of frass) (bug poop), so they pick up and move elsewhere. Many die, but enough find a habitable breeding area where their “food-generalist” caterpillars can thrive.

Is there comparable a southward migration by the offspring of the springtime travelers? The scribes disagree on both the “whether” and the “why.” One source speculated that their southward migrations simply may not be as dramatic. Painted Ladies are permanent residents along the southern tier of states, so a southern migration isn’t necessary to maintain those populations. One researcher questions whether, if they didn’t fly south, there would be any individuals left that retained a migratory instinct. Since any Painted Lady north of the Mason-Dixon Line is a goner come winter, migrators, the theory goes, need to head south again so there will be more migrators to head north again. The BugLady doesn’t know how the Migratory Instinct theory jibes with the el Nino Plant Boom/Bust theory and the Random Migration theory.

While it’s a year-round resident of the southern U.S. (south into South America and even the Galapagos), its summer wanderings bring it here to God’s country. Like the Painted Lady, it likes sunny, open spaces, and like the Painted Lady, it is an early migrant from the south that re-establishes populations in the North and East annually (it was recorded in Wisconsin in the first week of May this year). Unlike the Painted Lady, its caterpillars are tied to a smaller list of host plants, including the everlastings and pussytoes, and a few other species. American Lady caterpillars also construct “tents,” but instead of pure silk, the American Lady sticks leaves together with silk, and in another example (their nests, according to this site, sparkle in the morning dew). They feed outside the shelter. When disturbed, the caterpillars curl up tightly.

The American Lady has at least two broods here in the North Country, and like the Red Admiral, the summer adult is brighter in color than the winter form. If the spring individuals look travel-worn, like they’ve flown hundreds of miles to get here, it’s because they have.