Two elements of the awful summer of 2012 have the BugLady a bit worried about the 2013 crop of dragonflies. First, many dragonflies lay their eggs in shallow waters, which last year quickly became mud flats, and then dried mud. How many eggs and naiads got stranded in their dehydrating habitat? Second, there were almost no mosquitoes in 2012, and mosquitoes are an important dragonfly staple. This year’s first hatch of mosquitoes is upon us, and they are many and ravenous. Just as the Mormons were saved by gulls from plagues of grasshoppers (the Mormon cricket is actually a katydid, but “grasshopper” will do), so do we look to dragonflies and damselflies for our redemption. Stay tuned. 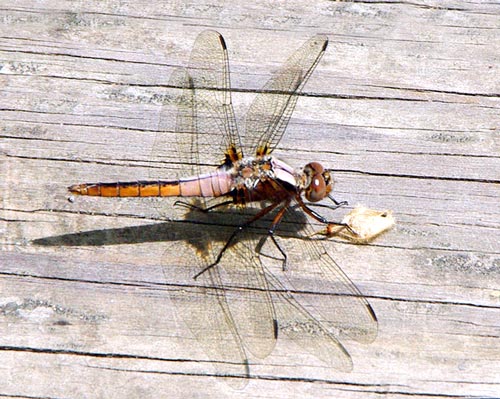 The thawing of water in spring is a powerful and irrevocable signal, summoning the amphibians to breed and stirring young dragonflies (naiads) to complete their metamorphosis. Water changes temperature slowly, but the appearance of Chalk-fronted Corporals gives notice that the water has warmed. Chalk-fronted Corporals (Ladonia julia) (or Libellula julia, depending on whose book you read) are dragonflies whose range includes the northern half of the U.S. and southern Canada. They typically emerge in huge numbers in early May (this year’s cohort is late and lonesome; the BugLady has seen only a solitary individual). On cool, spring days, hundreds of CfCs may congregate on/over warm road surfaces.

The name “Chalk-colored Corporal” undoubtedly refers to the pale bars—“corporal’s stripes”—on the top of the first segment of an adult’s thorax. The adults’ thorax and the base of its abdomen are frosted with white pruinosity as the dragonfly ages. An opaque, pigmented (usually white/blue-white), waxy substance develops on the cuticle that covers the dragonfly’s exoskeleton, and it gives the abdomen (and sometimes other body parts) a powdered or hoary appearance. The brilliant white of a Common Whitetail’s abdomen is due to pruinosity. Female CfCs are a duller, browner version of the males with only a little pruinosity, and juveniles are a pinkish-brown with thin “shoulder” stripes and a black line down the center of the abdomen. All ages have small black spots at the base of each wing. They are about 1.6” long with a 2 ½” wingspread. 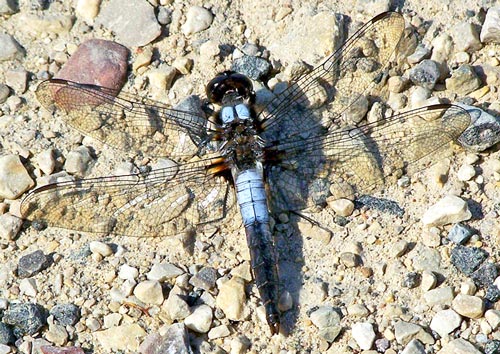 The pruinosity is not only a sign of aging, it’s an indicator of breeding readiness. CfCs take their reproduction seriously, and they stay away from the water’s edge until they have their adult markings and are ready for the dance. Males chase each other over the water aggressively, and some defend stretches of shoreline as long as 80 feet. After mating, she oviposits by hovering near the shore and tapping the tip of her abdomen into the water. Some sources say that the male guards her while she is ovipositing; others say he does not.

CfCs are in the dragonfly family Libellulidae, which includes many common and colorful species, and they are included by some authors in the distinctively-patterned group called King Skimmers. King skimmers are “the dominant dragonflies at most ponds, the quintessential dragonflies,” writes Sidney Dunkle in Dragonflies through Binoculars. They perch conspicuously on plants by the shore and in grasslands away from shore. CfCs like swampy, marshy, boggy wetlands with plenty of decaying plant material in it (other members of the genus like less-congested waters), and they can abide somewhat acid water. 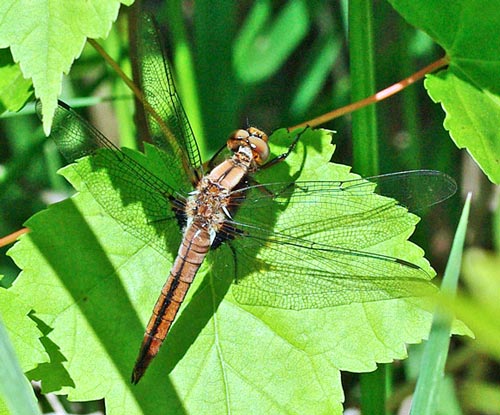 Round, brown, stocky CfC naiads are “sprawlers” that stay still and ambush prey as it passes; their diet includes scuds, tiny fish, tadpoles, and the larvae of other aquatic insects. They spend the winter under the ice, crawl out of the water when the time is right (by night—fewer predators); then they break out of their nymphal skins, pump up their wings and become creatures of the air, chasing their prey—flashes of wings that they spot from perches on the ground.

Adult CfCs grab flying insects from royal ant and mosquito through small dragonfly size. They typically hunt (and bask) from perches on the ground, on a rock, or on a floating leaf, but they also form feeding swarms, and they are known to follow people and pick off circling mosquitoes and deer flies. Much has been written in these pages about the benefits of aposematic (warning) coloration and about the benefits of mimicking an aposematically-colored insect, and the CfC appears to have read none of it. In studies of food preferences, CfCs chose small prey over large, but they didn’t seem to care if it was wasp-colored or not.

BugNote: BugFan Elaine reports seeing her first Monarch of the year and her first lightning beetles on May 31 in Fond du Lac County. Thanks, Elaine. Monarch numbers are predicted to be very low this year due to problems in the Mexican wintering grounds. Here’s a link to the BOTW about lightning beetles / fireflies.