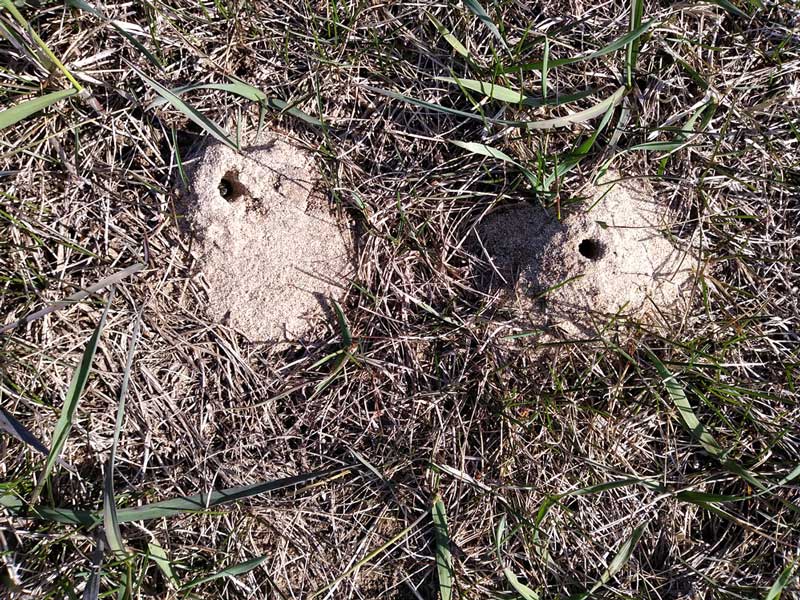 Let us celebrate native bees, those often unobtrusive and always invaluable pollinators that make possible much of our landscape and many of our crops.  Unfortunately, although she’s always photographing fuzzy little bees, the BugLady is pretty inept at identifying them, and she has no pictures definitively labeled “cellophane bee.” Says Eric Eaton, in bugguide.net “Virtually indistinguishable from some of the Andrenidae mining bees. Colletes are honey bee size, and have dramatic black and white banding on the abdomen. Some andrenids have similar markings, but are usually slightly smaller. Colletes tend to nest in dense aggregations, while andrenids are not usually as populous.”

So, in the middle of April, BugFan Jill sent this “what is it?” picture of two sandy mounds that looked like ant hills, and she reported bee activity around them. If you can enlarge the picture, you’ll see a bee face in the left-hand hole, a female sunning herself at the entrance. Adult males occupy separate nest holes. The BugLady turned to Tracks & Signs of Insects and Other Invertebrates, by Charley Eisenman and found out that the mounds were made by cellophane bees. Ant hills have openings big enough for an ant to walk into, but cellophane bees are much bigger than ants, and the openings are about as big around as a #2 pencil.

Cellophane bees are solitary bees, unlike the very social ants and honeybees, although they are comfortable surrounded by the nests of their sisters (“nest aggregation”) – sometimes by hundreds or thousands of them. The nest sites are easier to find in spring, when there’s less vegetation covering the ground.

Cellophane bees are in the wasp-bee-ant order Hymenoptera, in the family Colletidae, and in the genus Colletes, the cellophane/plasterer/polyester bees. There are about 100 species in the genus in North America and 460 globally. They’re found over much of the world in prairies and lawns, on embankments and woodland edges, and in other places where the soil is easy to excavate. They have heart-shaped faces with big eyes that angle out (instead of being parallel), and pale stripes on their abdomens, and they’re fuzzy, with pollen-collecting hairs on their back legs. Food plants, geography, and season can be clues to identifying species.

Without further ado—cellophane?? Like other ground-nesting bees, female cellophane bees dig tunnels (and sometimes reuse and enlarge old ones), making a separate cell for each egg. She digs by biting the soil with her mandibles, aided by vibrations from her flight muscles, and she uses her second and third pairs of legs to muscle the dirt out of the tunnel. Because she is equipped with two special glands – one fore and one aft—she can build a better mousetrap. First, she spreads saliva over the inside of the cell with a short, two-lobed, fringed tongue that some sources compare to a paintbrush. She has a gland at the end of her abdomen called the Dufour’s gland, named after a 19th century French naturalist. M. Dufour was fascinated by the bees’ ability to make plastique, and some modern scientists are, too, because of its potential uses.

She smears liquid from the Dufour’s gland over the cell’s walls, and it combines with the saliva to make a cellophane-like film that is both waterproof and biodegradable, though it can persist in the soil for several years. She’s not done yet – she has a gland in her mandibles that produces an antifungal, antibacterial substance that she sprays on the wall as well. She provisions each chamber as she finishes it. Here’s a picture of a bee and a cell lining.

Most ground-nesting bees collect pollen and nectar, form it into a dry “loaf,” and lay an egg on the outside of it. Not the cellophane bee—the provisions she provides are liquid. She suspends her egg from the wall or ceiling of the chamber, closes it off with more cellophane, and then fills the hole with dirt. When it hatches, the larva falls into the liquid and develops there, floating in its sweet food supply, insulated from soil moisture and, said one source, even from invasion by plant rootlets. It pupates in the cell.

Despite all the female’s efforts to conceal and waterproof her offspring’s’ nursery, there’s a group of cuckoo bees that specialize on invading the cells. Female cellophane cuckoo bees enter the nest during the preparation stage and leave eggs in a chamber. The larvae hatch, kill the cell’s owner, and eat its food. It’s called kleptoparasitism—“parasitism by theft”—though not all kleptoparasites kill the unfortunate owner of the chamber directly.

There are various species of cellophane bees on the landscape throughout the growing season, and some are among our earliest insects. Males chew their way out of their cells first, dig out of the tunnel, and spend a few days feeding and buzzing the area, a few inches off the ground, waiting for females to emerge. The whole show is over in just a few weeks. One source said that these are not long-range flyers—they usually live and die within 500 feet of where they started. Most species produce only a single brood—spring-flying species overwinter as adults, and later-season species spend the winter stalled in the pupal or prepupal stage.

Spring cellophane bees are often abroad before the wildflowers, so they depend on early-blooming trees, especially maples and willows. The summer species are more likely to visit wildflowers.

People are (reasonably) alarmed when they see a mass of wasps/bees flying around near the ground. Cellophane bees don’t have an aggressive bone in their bodies – no drive to defend a communal nest—so you won’t get stung unless you happen to step on one barefoot, and as always, males don’t sting at all. They have such a short flight period that even the exterminator sites advise you to just wait them out.

The Unequal cellophane bee (Colletes inaequalis) is a common spring species in Wisconsin and the eastern half of the country, and bugguide.net tells us that it has been introduced into many world regions. It’s been recorded on wild cherry, shadbush, pussy willow, wild currant, blueberry, maple, viburnum, and a few early wildflowers.

Unlike many of the bugs that the BugLady researches, there is tons of information about cellophane bees. Still curious? See https://www.houzz.com/magazine/invite-cellophane-bees-to-your-garden-by-providing-patches-of-bare-soil-stsetivw-vs~47327639 and https://www.sharpeatmanguides.com/cellophane-bees.

Keeping up with Brood X?