Back in July of 2011, the BugLady opened an episode of BOTW by saying, “The BugLady and her camera have been skulking about the pond edges, feeding the mosquitoes and looking for damselflies to photograph.” The sentiment still applies, and she thinks everyone should do the same—it’s good for us physically (great training for that future career as a contortionist), mentally, spiritually, and cosmically. Damsels present a challenge to enthusiasts because they frequent habitats that are low and dark and green and leafy, protected from predators (which include dragonflies and even other damselflies) (and from photographers). And they’re little.

Damselflies and dragonflies are in the order Odonata. Compared to the (mostly) much larger dragonflies, damselflies look delicate, and their eyes protrude to each side giving them a bug-eyed/hammerhead appearance. A dragonfly’s hind pair of wings is broader than its front pair, but a damselfly’s four wings are roughly equal. And while dragonflies hold their wings out to the side when they perch (usually), damselflies can hold their wings together over their backs.

Three Families of the Delicate Damselfly

The three families of damselflies in Wisconsin are the Broad-winged Damselflies (Calopterygidae), Spreadwings (Lestidae), and Pond Damsels (Coenagrionidae). Damsels come in most colors of the rainbow, and some have striking color patterns. The BugLady recommends Damselflies of the North Woods by Bob DuBois (there’s a nice Family key on page 25), the Beginner’s Guide to Dragonflies, by Nikula, Sones, Stokes and Stokes, and Dragonflies and Damselflies of the East by Paulson. The Wisconsin Odonata Survey and the Wisconsin Dragonfly Society, which has an active Facebook presence, are good on-line sources. 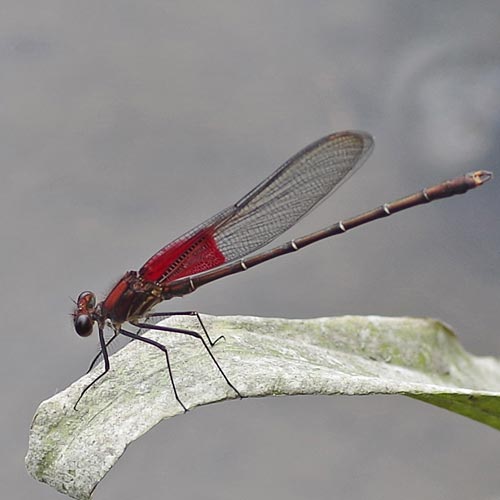 In some groups the male “contact-guards” his female as she oviposits, keeping hold of the back of her head in order to discourage other males. In other species he guards from the air or a perch against intrusion by another male, a male that will remove the first male’s spermatophore from the female before offering its own. Alas, he may not be as effective guarding against predators. Last week, the BugLady was watching a female Eastern amberwing dragonfly oviposit, her male perched nearby (awesome creatures). The BugLady blinked, saw a blur (possibly a Common whitetail dragonfly-shaped blur), and the female amberwing was—simply—gone, leaving the mystified male bobbing on a rush.

Broad-Winged Damsels, usually found near running water, are our most dramatic damsels, often with metallic coloration and patterned wings (females are not as gaudy). Where the wings of other damsels seem to be attached by a “stalk,” there is no stalk on the wings of this group (the wings are thicker where they attach to the body). Broad-winged damsels perch horizontally on their long, spindly, spiny legs, and they use their showy wings in courtship displays. Four species of Broad-winged damsels live in Wisconsin; the two that are common in the BugLady’s neighborhood are the Ebony jewelwing and the well-named American rubyspot. 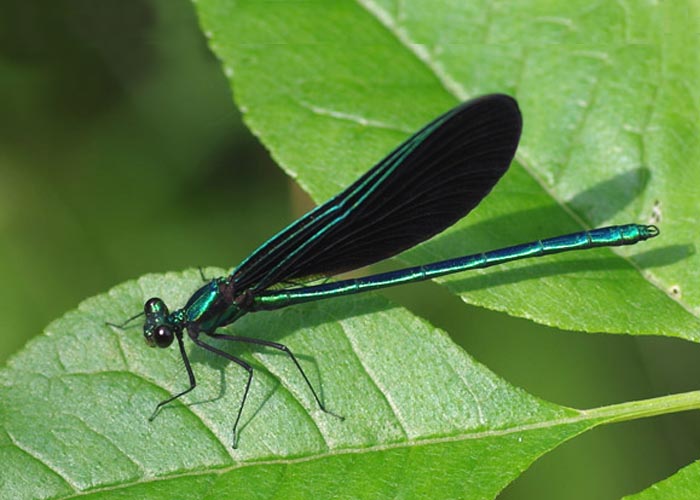 The flight of Ebony Jewelwings is often described as “butterfly-like,” and several sources (in a parallel universe) testify to their approachability. Researchers have determined that their crimson wing spots make American Rubyspots more visible both to predators and to potential prey as they cruise low over the river’s surface, with negative results on both fronts. Carpe diem.

Spreading Damsles usually (but not when they’re alarmed or sleeping) perch with their wings at a 45 degree angle to their body. While not flashy by Broad-winged damsel standards, these small-to-medium-sized damsels are often subtly-lovely, and several species are metallic green. Spreadwings have clear wings (except for the Amber-winged), a long abdomen, and long legs that bear long spines (the better to catch you with, my dear). Males have blue eyes, and their bodies become increasingly pruinescent as they age. Spreadwings may perch obliquely or hang from vegetation. The BugLady’s “North Woods” damselfly guide falls open automatically to the page that shows the diagrams of the Lestes male claspers. 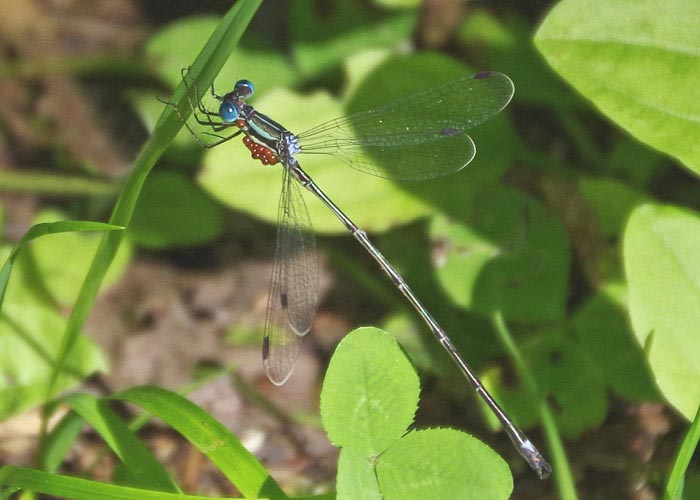 And then there are the Pond Damsels, a common and varied family that includes the dancers, sprites, forktails, and the often-inscrutable bluets (of the two dozen species of damselfly in Ozaukee County (give or take), almost half are members of the bluet group). Pond damsels range in size from two-inch spreadwings to less-than-an-inch sprites. With some exceptions, they perch with clear wings held together above their backs. The top half of the eye is dark and the bottom half bright; many species have eyespots; many species have a diagnostically-striped thorax; and males’ terminal appendages are short. Females may come in several color phases, including a male-like coloration plus a green, olive, or tan form. They perch horizontally or at an angle, and they are weak fliers that seldom gain much altitude. Canadian Naturalist John Acorn called them “flying neon toothpicks in the grass.”

When it comes to Bluets, the BugLady is happy for her camera and computer monitor, so she can study an image on the screen at leisure. DuBois divides the BLUET species into the “black-type” bluets, with abdomens whose upper surface is mostly black; “blue-type” bluets, at least half blue on the middle abdominal segments; and “citrus-hued” bluets. 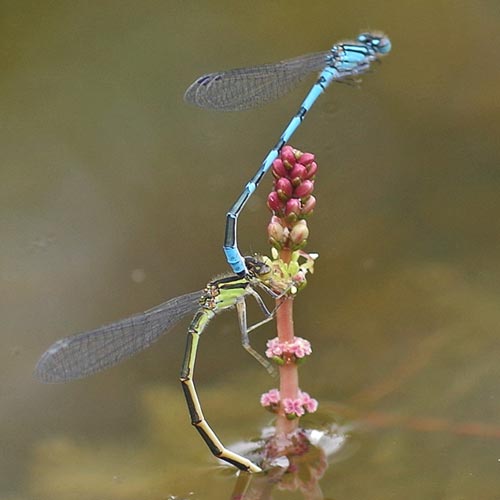 The BugLady loves Sedge Sprites, which are all over the landscape these days. They are seriously tiny damsels, reminiscent of a sewing needle floating through the sedges. 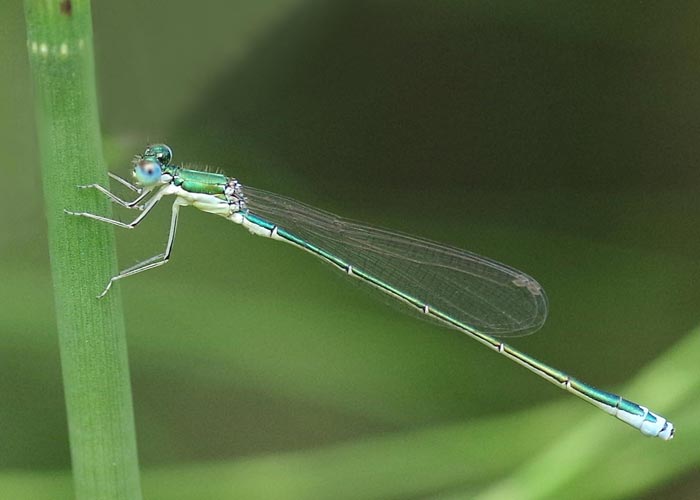 Forktails get their name from a tiny, forked structure at the tip of the male’s abdomen (which is best seen when the forktail is in hand). They may be mistaken for bluets (but – no eyespots). They’re generally both our earliest and our latest-flying damsel. Young females are orange; pruinescence turns older females slate blue.

Dancers get their name from their bouncy flight (which doesn’t translate to a still picture on a monitor). DuBois mentions that dancers’ leg spines are twice as long as the space between them. At 1.0” to 1.6”, they’re considered medium-to-large damselflies. The tan females can be a real bear to tell apart. The Violet/Variable dancer is one of the BugLady’s favorite insects. 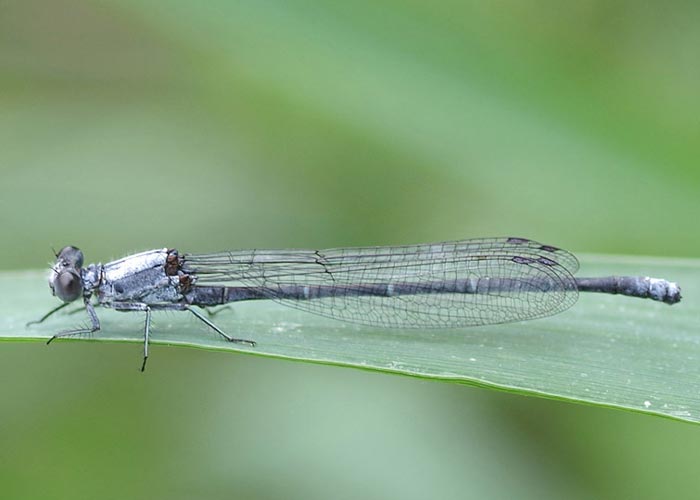 Go outside. Find a wetland edge and watch the action. Bring a chair. Better yet, turn out for the Riveredge Nature Center (Newburg, WI) Annual Dragonfly Count on July 25 from 10 AM to 3 PM. To join the crew or for driving directions, please contact Mary at 262-416-1224 or mholleback@riveredge.us. Binoculars are helpful; sturdy shoes a must, and BYO lunch if you’re planning to make a day of it. The event is free, but a $5 donation would sure be appreciated.