A few weeks ago, the BugLady noticed a non-descript grayish caterpillar on the outside of an almost-dried Queen Anne’s lace flower. She thought it was an odd place for a caterpillar, but she didn’t follow up on it. A week later, she was startled to see a pastel pink, polka-dotted larva attached to another drying QAL flower head. So she Googled “pink caterpillar on Queen Anne’s Lace” and to her surprise, instead of a Punk band or Children’s Raincoats, she discovered another newcomer to our shores. 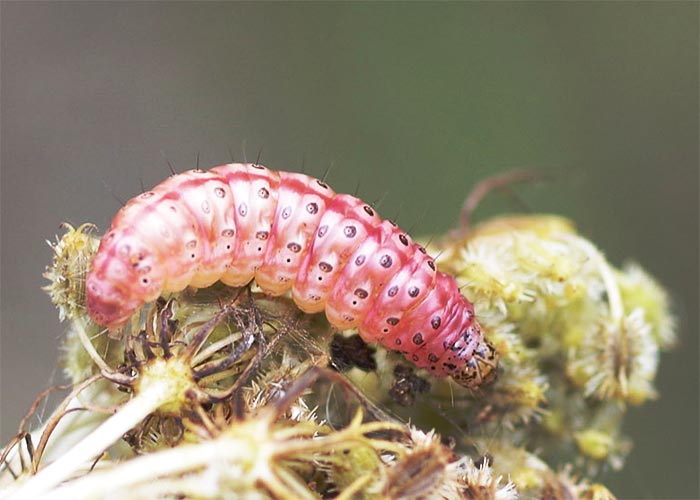 The Carrot Seed Moth, a.k.a. the Greenish-yellow Sitochroa Moth a.k.a. the Sulphur Pearl, was first noticed in Midwestern North America in 2002. It’s Eurasian in origin, and along with pictures and property lists, its internet presence consists of papers in Greek, Norwegian, German, Russian, French, Italian, Dutch, and several Asian tongues. CSMs are uncommon enough in England to be noteworthy when they’re spotted there. Its North American adventures seem to be starting in the center of the country, but it’s not certain how the CSM arrived in our backyard. Some researchers suggest that the moth may have hitchhiked on a trans-Atlantic vessel that ended up at a Great Lakes port. A little more than a decade later, it’s found from North Dakota to Ontario to Pennsylvania and Ohio to Iowa.

The CSM (Sitochroa palealis) is one of about 12,000 species in the cosmopolitan (distributed world-wide) Grass/Snout Moth family, Crambidae. Crambid caterpillars tend to be borers in roots and stems, and miners in leaves; some bother agricultural crops (rice, corn, grapes, and beans) and a few are biological controls on problem plants (wild hyacinth and Eurasian water milfoil). The adult CSM is an anonymous, pale, arrow-shaped moth with a one-inch wingspread that is somewhat reminiscent of a cabbage butterfly. Adults nectar by day at QALs and other grassland flowers, and descriptions tend to say “Nothing else looks like this moth.” 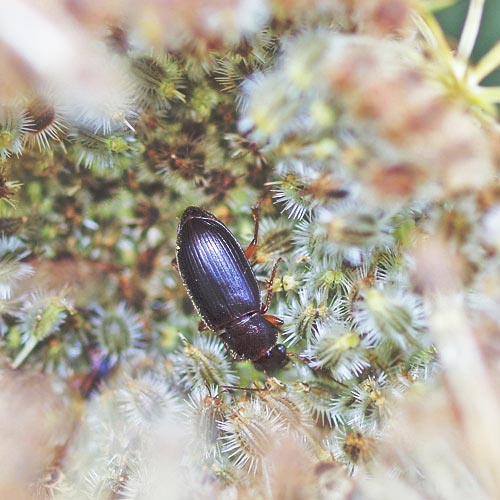 CSM caterpillars feed on QAL flowers and on the seeds that they find within the “birds nest” clusters of aging flowers, and they also dine on several other members of the carrot family like sweet fennel, cow parsnip, and wild parsnip. In order to feed safely, they tie the flower cluster together with silk. According to Bugguide, a caterpillar may spend two years within its flower head, but when it’s time to pupate, it will drop to the ground in spring and pupate in a tough case in the soil. 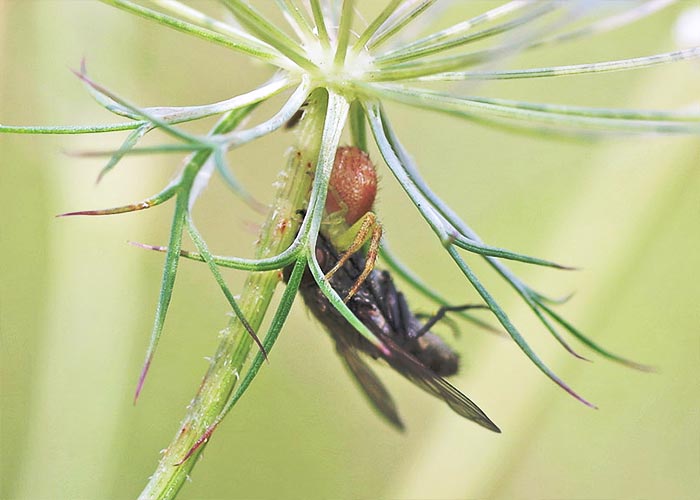 The BugLady pulled open a number of webbed flowers (one article calls them frass baskets) and found several that were occupied by caterpillars (but no more pink forms; the pink coloration may be just in early instars, but the BugLady couldn’t find any specific information about that. Maybe in one of those Norwegian articles) and lots of frass. She also saw some small flower heads that had already been stripped of their seeds, a brownish, chevronned larva that was not a CSM, an earwig, an interesting beetle that was tucked into the floor of the nest, a crab spider using the QAL infrastructure for a hunting ground, and a reddish dot in the center of a QAL that was not caused by a drop of blood from Queen Anne’s finger where she pricked it while making lace. 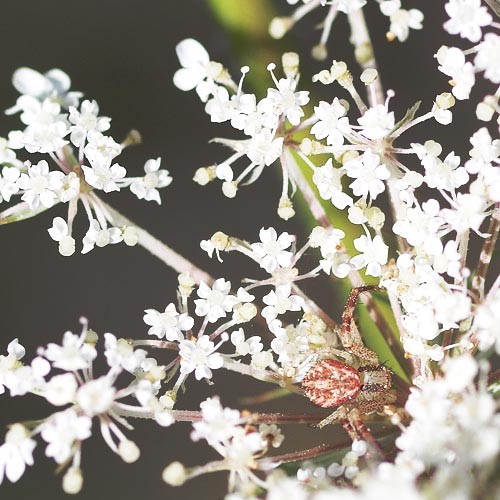 Are CSMs economically important? To carrot-growers, no—CSMs don’t attack the carrot. If CSM populations increase substantially, commercial growers of carrot seed may take issue with them. On the meantime, maybe they’ll put a small dent in the scourge of wild parsnips. 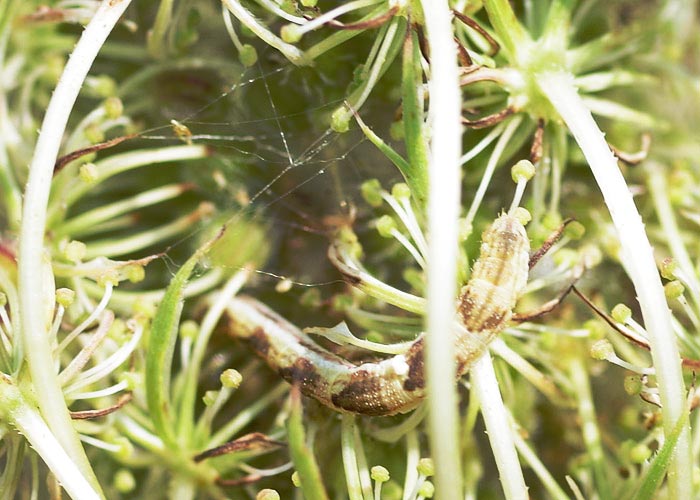