This episode is rated “NftFoH” (Not for the Faint of Heart) and may give more sensitive BugFans the vapors. It also carries a “Classical Language Alert.”

S.W. Frost, in his excellent-but-out-of-print Insect Life and Natural History says that “Scavengers can obtain a living in almost any environment.” Carrion beetles and Burying beetles, classified in the family Silphidae, are scavengers. Medium to largish in size (both species shown here measure close to an inch), they are good flyers with strong legs that are tipped with spines and adapted for digging. And dig they do. In a nutshell, Silphids bury small carcasses so that their larvae (grubs) can feed on them (gory details follow). Alas, the larvae of some species stray and nibble on snails or even plants, but most undertake the very important role of scavenger, disposing of those unsightly dead bodies that would otherwise litter the landscape. 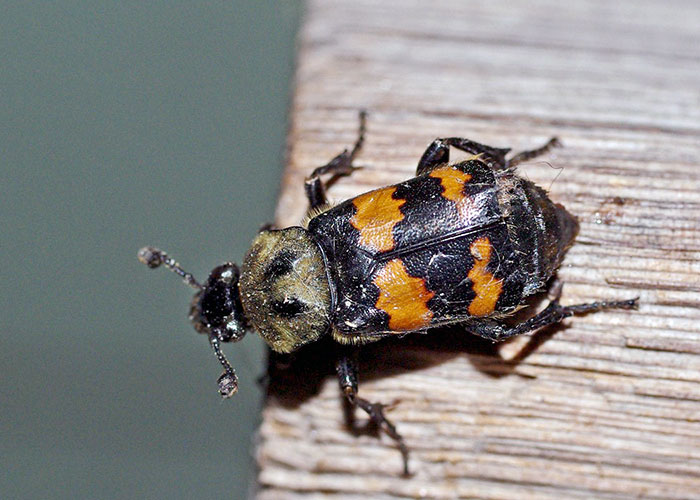 Here, in general, is how it happens. After finding a carcass (or an almost-carcass)—anything up to rat-size is fair game(mdash;a pair of beetles buries it and the female lays eggs on or near it. Some species only minimally bury a cadaver; some excavate the soil out from under it, causing it to sink, and then cover it with debris. They may drag their prize as far as 15’ in search of suitable soil in which to inter it. According to Eaton and Kaufman, in the Field Guide to Insects of North America, some species process the corpse, removing fur or feathers, “fashioning the corpse into a meatball.” Some cover it with a slimy “preservative.”

As CSI fans know, the first insects at the scene of a casualty are the flies whose maggots thrill forensic entomologists. To deal with the competition, Burying beetles (Nicrophorus sp.) import their own “fly-busters”—mites that hitch a ride on the beetles and disembark to eat both the fly eggs and the ravenous maggots. According to The Handy Bug Answer Book by Dr. Gilbert Waldbauer, this hitchhiking is called phoresy (from the Greek phorein—to carry or wear). Phoretic passengers don’t gnaw on their hosts, they just take advantage of their hosts’ superior mobility. Burying beetles pick up their load of mites as newly-emerged adults, before the beetles ascend from their underground pupal chambers. This species of mite, says Waldbauer, is only found in association with Burying beetles. Carrion beetles (Necrophila sp.) skip the middle man, feeding directly on the maggots and on the larvae of other beetles, salvaging the food supply for their own offspring. Wowsers! 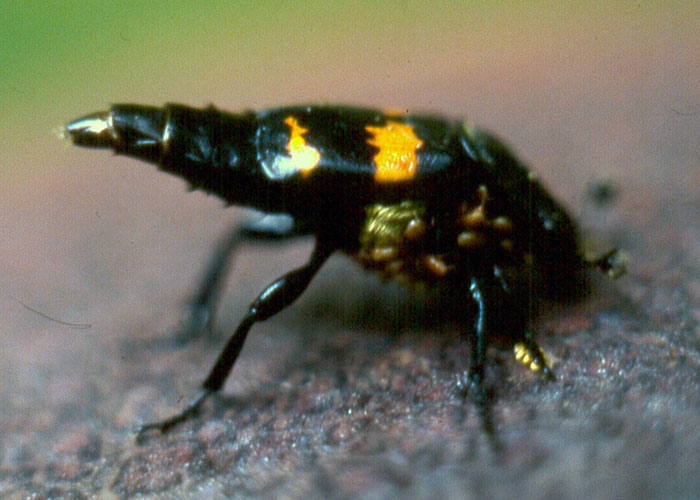 The orange and black Burying beetles (Nicrophorus sp.) care for their young (unusual in the insect world), feeding them regurgitated carrion until the youngsters are ready to dive in on their own; Mom even guards them as they pupate in chambers in the ground. They have short elytra (the hard front pair of wings that protects the flying wings), and they can squeak by rubbing their abdomen against the underside of the elytra. One species of Burying beetle uses this sound both to warn away interloper beetles and to summon its young to the supper table. A startled Burying Beetle may mimic a bumblebee, going belly-up and buzzing its wings. The lumps on the thorax below the broad orange stripe in this not-so-good scanned slide (apologies) are mites (check out bugguide.net for better pictures), and the BugLady isn’t sure about the row of yellow ovals on its front leg. 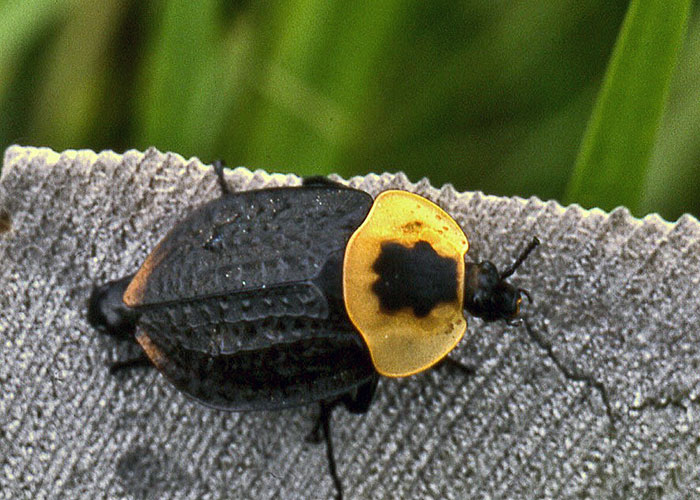 An American Carrion Beetle (Necrophila americana (formerly Silpha americana)) finds carcasses by smell. Its grubs feed on carrion sinew and skin, under a carcass or, um, “in its cavities,” and they pupate in the ground. Like the Burying beetle, it resembles a bumblebee in flight. 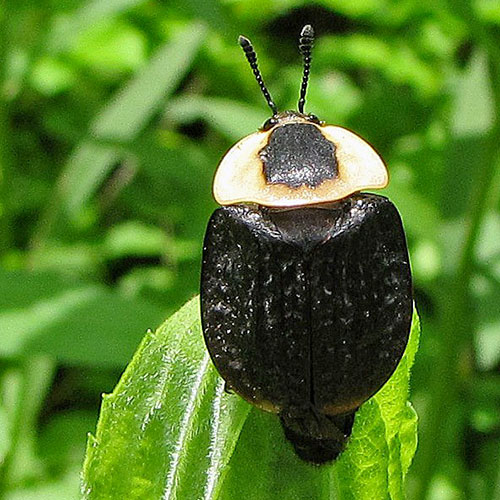 Frost divides the decay process into two consecutive stages of gas production followed by “liquification” (the stage enjoyed by many Silphidae), followed by the dry (“jerky” stage). He goes on to discuss the groups of insects classified as Saphrophagous (from the Greek saphro—rotten and phagous—to eat or eating). These “eaters of decaying matter” are divided according to their target meals into the zoosaprophagous or sarcosaprophagous (sarco refers to flesh) animal scavengers, the phytosaprophagous plant scavengers, and scatophagous or coprophagous poop scavengers. OK, the BugLady promised in a recent episode not to do that any more, but now you’re ready for the “Phage” board on Jeopardy (“I’ll take Zoosacrophages for $300, Alex”).