Today’s episode celebrates the Carolina Saddlebags, the third saddlebags species to grace these pages; but first, a brief commercial message.

Birders (and non-birders) are urged to tune in to the Great Wisconsin Birdathon, which will be heating up any minute now. Teams take pledges from donors and then head out for a day of birding in May in order to raise money for bird conservation initiatives in Wisconsin. The number of teams has exploded this year, and the BugLady gets a kick out of some of the team names.
Fans of the Great Lakes should check out the Walk to Sustain our Great Lakes, in which Julia and Alyssa will, starting in August, take a little stroll from the Milwaukee harbor to Lake Superior. A number of classroom teachers have already signed on to follow their progress/interact with them when school resumes in fall.
While you’re at it, read all about the 2017 SEWISC Garlic Mustard Pullathon.

We now return to our regular programming.

First of all, a little about the saddlebags genus Tramea. It’s in the skimmer family Libellulidae, a genus with seven species known from North America, four of which have been recorded in Wisconsin. They’re named for the dark patches at the base of the hind wings, conspicuous when they fly overhead (they‘re tireless flyers and can circle overhead for far longer than you and your camera feel like waiting). Striped Saddlebags, the latest addition to Wisconsin’s saddlebags list, are in a subgroup called the “narrowsaddle” saddlebags, because the saddle is only about as wide as the dragonfly’s abdomen. Our other three species (Red, Black, and Carolina) are “broadsaddle” saddlebags. 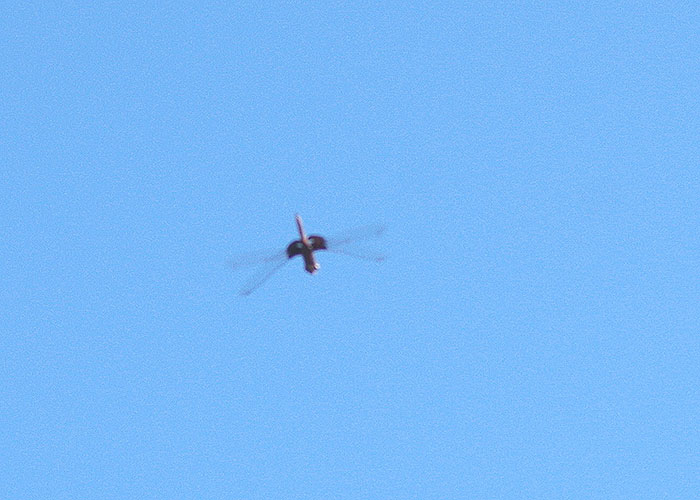 They are often called “dancing gliders” because of their unusual reproductive behavior. A male patrols a territory, and when a female nears, he accosts her, using his legs to grab her and manipulate her so that he can get his claspers onto the back of her head. Saddlebags mate for about 10 minutes, perched on vegetation (she can store sperm and need only mate once), and then they fly out over the water in tandem at about knee height or lower (our knees), looking for an area with lots of emergent vegetation. When she is ready to oviposit, he releases her (demonstrated here by Black Saddlebags) but continues to guard her from above (hover guarding). She drops to the water’s surface, tapping it gently to loosen some eggs, and then dances back up to rejoin the male, and then they do it again. Paulson, in Dragonflies and Damselflies of the East, says (about Black Saddlebags) that the dance is observed from underwater, and that bass and other predatory fish have been known to follow a preoccupied couple (needless to say, saddlebags prefer fish-free ponds). Unattached males may follow, too, and take advantage of the brief uncoupling to steal the lady. She may oviposit solo, but if she does, she moves ten times faster than she does when a male is guarding her.

These are largish dragonflies, around two inches long, with broad hindwings, a slim abdomen, and a round head. And they are fast, reaching speeds of 17 mph. They may rest high in a tree or near the ground, invisible either way (the BugLady is always inadvertently kicking them up out of the grass). In hot weather, they may droop their abdomens as they perch, a reverse “obelisk” position that has the similar result of averting overheating by minimizing the amount of sun that strikes the abdomen, and they do the same thing in flight. Not surprisingly, the majority of internet hits for saddlebags are photo sites.

The books say that the genus Tramea is considered one of the most highly evolved genera of dragonflies. The BugLady saw that statement a number of times, without elaboration, in connection with the saddlebags and also with the rainpool gliders (genus Pantala). In the case of the gliders, it seemed to be associated with physiological and behavioral adaptations that allow them to fly for huge distances, feeding in the air (they even have the ability to store fat and use it for energy on long flights), and that allow their naiads to develop quickly in very temporary bodies of water. Of course, gliders are also famous for ovipositing on car windows in parking lots, thinking they are over water, so they lose a bit of credibility there.

We’re near the northern edge of saddlebags’ ranges here in Wisconsin (check species ranges at the Wisconsin Odonata Survey), and have fun with the maps at the really cool national dragonfly range-finder (type the genus of your dragonfly into the “Taxa” box (in this case, Tramea) and select your species from the drop-down list).

Carolina Saddlebags (Tramea carolina) have been recorded in about 15 counties in Wisconsin, scatter-gunned throughout the state. These are primarily eastern/southeastern dragonflies that range from Nova Scotia to Texas, and they’re listed as a rare migrant here in God’s Country, but sightings seem to have been on an uptick in recent years (more dragonfly watchers? climate change?). Carolinas prefer shallow ponds, swamps, and lakes, and very slow streams as long as there is plenty of emergent vegetation and the water is not muddy, and they are a bit more tolerant of the presence of fish than their confreres.

They are one of two red broadsaddle saddlebags on the Wisconsin scene, but neither of the red species is as widely distributed in the state as the Black Saddlebags. How can you tell them apart? Short answer—sometimes you can’t (so maybe there are more Carolinas out here than we think).

Another name for the Carolina Saddlebags is the Violet-masked Glider. Typically, the Red Saddlebags has a lighter, redder-colored face, and the Carolina’s is described as “metallic violet” (males’ faces and abdomens are more intensely-colored than females’). Another big difference lies at the other end of the dragonfly; a Red Saddlebags has a few black marks across the top of the eighth and ninth abdominal segments, but in the Carolina, the black is much more extensive and wraps around the sides of the abdomen. And then there’s the shape of the saddle itself. Some saddlebags are remarkably cooperative and will sit still for photographs, but they often hold their wings in a way that hides the tell-tale perimeters of those red saddles. For a great comparison, see Carolina Saddlebags. And just for fun, some younger individuals can be almost as dark as Black Saddlebags.

The naiads (aquatic young) are green, with five, short “tails” at the end of their abdomen http://bugguide.net/node/view/224444/bgimage. They excel at mosquito control – in one test, consuming 38 in two days. When their final transformation into an adult occurs on land, they leave behind an empty shell (exuvia) as witness. Adults continue to feed on mosquitos, catching and consuming their prey on the wing. They feed all day, until dusk, and they may be found in smallish feeding swarms in company with others of their species.

Yes, they migrate to the North Country in small numbers in early summer. The BugLady has photographed juvenile/teneral Carolinas in Southeastern Wisconsin, so they breed here, too. They are not among the five species censused in a Citizen Science project run by the Xerces Society/Migratory Dragonfly Partnership (don’t forget Dragonfly Woman). Carolina Saddlebags are less migratory than the phenomenal Black Saddlebags, but they do make up a small percent of the southward migration along the Atlantic, where they help to fuel the fall raptor migration.