Grasshoppers (order Orthoptera—straight-wing) have four wings; the leathery first or top pair shelters the second pair—the flying wings. They practice Simple/Incomplete Metamorphosis, adding size and a few body parts as they grow (and females tend to grow larger than males do). The gray immature locust has wing buds that will develop into wings after a few more molts. They don’t have a resting stage or an ugly duckling-to-swan transformation. Locusts belong to the family Acrididae, the short-horned (short antennae) grasshoppers, which comprises about 650 species in North America and includes grasshoppers with colorful wings and others that are flightless. 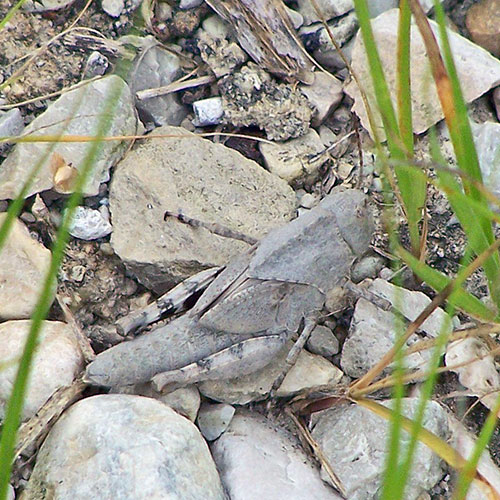 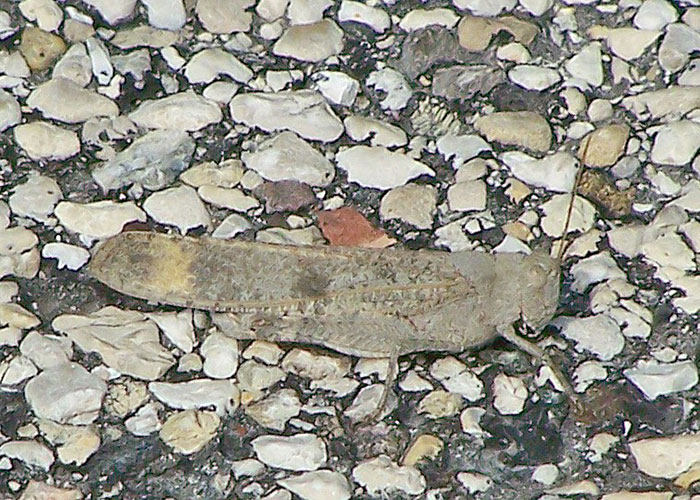 The BugLady has always enjoyed the courtship antics of the Carolina locust. Rising up from a weedy field, lawn, vacant lot, or dusty dirt road, a male gains about 3’ in altitude and then “hovers” for a moment, twitching and clicking, before dropping to earth again. Elliot and Hershberger, in Songs of the Insects (which includes a CD) calls this crepitating—“producing a crackling series of snaps or clicks as they take flight or as they hover or fly in a butterfly-like fashion during courtship.” To create the sound effects, males pop taut membranes between their wing veins; this attracts both females and rival males, who then duke it out (via a series of power leg lifts) for the favors of the fair maiden. Carolina locusts may also stridulate softly (rub together rough spots on their wings) when they are perched. 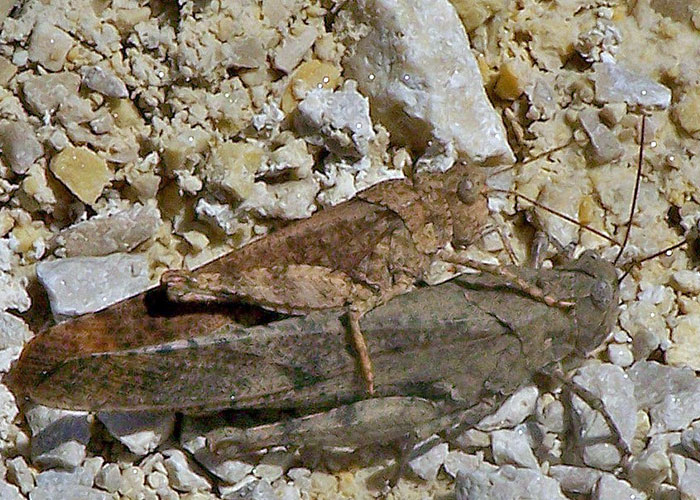 Carolina locusts come in tans through rusty browns (note the difference in color in the couple that is exchanging bodily fluids). As a group, Band-winged grasshoppers are conspicuous in flight due to their color-banded flying wings (because of their dark wings edged with cream, Carolina locusts are sometimes mistaken for Mourning Cloak butterflies), but they are awesomely camouflaged at rest. In The Handy Bug Answer Book, Dr. Gilbert Waldbauer refers to these unexpected wing patterns as “flash colors” which, sometimes in concert with flight noises, attract/distract a predator. When the grasshopper lands and tucks in its flying wings, the pursuing predator suddenly can’t find anything that matches its search image. 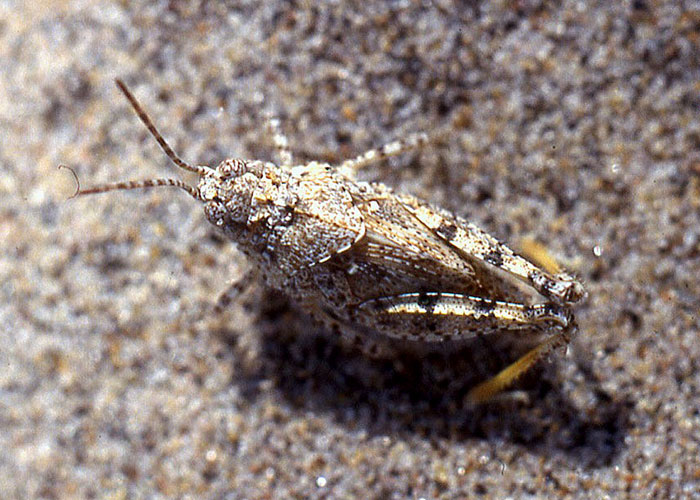 This immature locust was photographed in the dry-sand zone of a Lake Michigan beach; it matches both color and texture of its habitat. Eric R. Eaton and Kenn Kaufman, in the Field Guide to Insects of North America report that when standing on hot surfaces, locusts lift alternate feet to keep from scorching.

Most BugFans have seen, in Dances with Wolves or in a similar account of the lives of the Plains Indians, a reenactment of a bison drive. Many of the same tribes that chased large hunks of protein across the prairies on horseback also arranged locust drives. We Westerners are pretty snooty about using this source of free protein, but people worldwide tuck into all manner of grubs and locusts and caterpillars with gusto.