The candy-striped leafhopper (CSL) (Graphocephala coccinea) is one spiffy little insect—easily overlooked, but once seen, unforgettable. Because of its coat(s) of many colors (there are a number of sub-species to be reckoned with), it has a bunch of common names, like candy-striped, scarlet and green, red-banded, and red-and-blue leafhopper. The BugLady loves common names because they tell us what the non-scientific admirers of a plant or animal think about it. CSLs have yellow legs, a yellow head with a black racing stripe through the eyes, and a bright blue/green and red/red-orange-striped thorax and wings. The genus name, Graphocephala, comes from the “cuneiform” markings on the heads of several of the species in the genus (another genus in the family is Draeculacephala, whose name means dragon’s head and whose mostly-green members have pointy, conical heads). 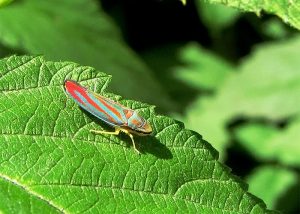 CSLs are leafhoppers (the pre-teen BugLady used to call the group “Pop bugs”). They are in the order, Homoptera, with cicadas, spittlebugs aphids, and scales. Homoptera means half-wings and is a tribute to their front pair of wings, which are the same texture throughout their length (most entomologists combine Hemiptera and Homoptera, but the BugLady is clinging fast to the old classification). CSLs are in the family Cicadellidae, a family noted for (besides hopping) a row of small spines along the outer edge of the hind tibia (lower leg). There are about 2,500 species in North America and about 10 times that many worldwide.

Do they hop? Do they ever! They can “sidle,” but their preferred means of locomotion is leaping, and to this end they often sit with their hind legs flexed. According to Kaufman and Eaton in their super Field Guide to Insects of North America, some leafhoppers can leap 40 times their own body lengths, putting them among the champion jumpers of the animal world!

Their habitat is meadows and woodlands and the BugLady’s geranium collection; they especially like members of the blackberry/raspberry bunch. You can find CSLs in the Americas from Panama, north.

CSLs lay eggs in plant leaves, and the nymphs hatch in spring and feed on the juices in the new leaves. They practice Incomplete Metamorphosis, with the nymphs completing five molts on the way to a summer adulthood. Despite the small size of the eggs, nymphs, and adults, they are discovered by parasites and by predators like birds, spiders, and fellow-insects.

Like spittlebugs (of recent BOTW fame), CSLs feed on juices from plant leaves and stems. They have piercing-sucking mouthparts which arise from “under their chins” (Hemipterans’ mouthparts poke out from the fronts of their heads). Also like spittlebugs, CSLs’ eyes are bigger than their stomachs. Unlike spittlebugs, the excess sap consumed by CSLs combines with bodily wastes, and droplets of this mixture (called “honeydew”) are expelled “under pressure” from the insect’s wee posterior, with a tiny, sometimes-audible “pop.” For this reason, some leafhoppers have earned the common name “sharpshooter.” Leafhoppers, unfortunately, aren’t very good for leaves. Their feeding can cause damage by discoloring leaves, by interfering with the transport of liquids in the plant, by causing curled and stunted leaves, and by spreading disease. In the process of feeding, as they move from infected plants to the uninfected, some leafhopper species (including CSLs) spread bacteria that cause a leaf scorch disease (called Pierce’s disease) which affects grape vines, elm, oak, and some woody ornamental plants.

Interesting CSL Fact: CSL can vocalize, like cicadas, by vibrating internal membranes at the base of the abdomen. Unlike cicadas, these CSL sounds are so soft that people don’t hear them.