Camel Cricket – the Rest of the Story 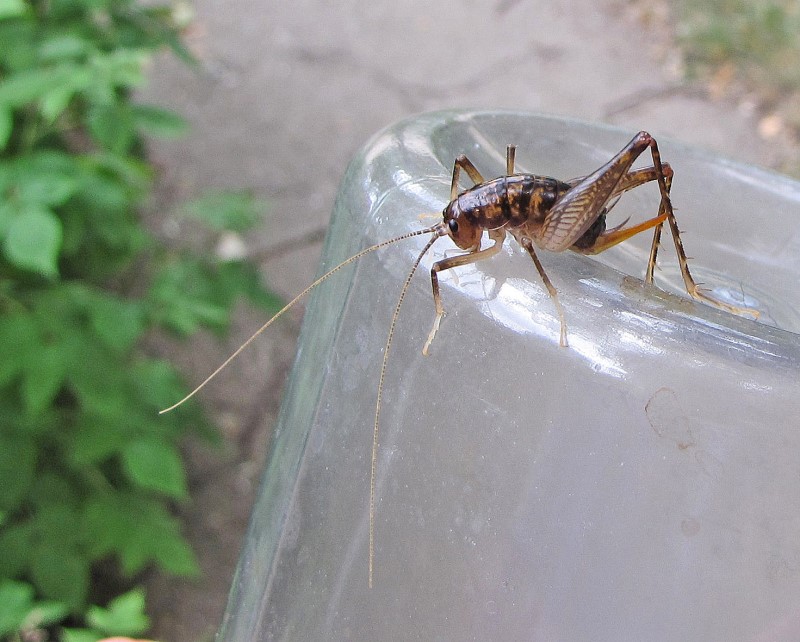 BugFan Carl sent the BugLady a “What-is-it?” picture recently of an insect that had met an untimely end in his basement. It was a camel cricket, an awesome critter that the BugLady used to see in her own basement (when she had a basement). She wrote briefly about them in “A Cache of Crickets” in 2008, but they needed to star in their own episode. It turned out to be a big story, so put your feet up!

Camel crickets are in the grasshopper/cricket/katydid order Orthoptera and in the family Rhaphidophoridae (pronounced Rap-he-doe-fore’-a day, says https://infinitespider.com). In her original article, the BugLady placed them in the family Gryllacrididae, but she doesn’t know if they’ve been moved or if that was insufficient scholarship on her part. There are about 500 species of cave crickets in the world (they’re absent from very cold areas), with 150 species in North America, and our greatest diversity is west of the Mississippi. The lunker of the North American crowd seems to be the Square-legged camel cricket, which lives along the Pacific Coast and has a small body and a leg-spread of up to 8.”

“Camel cricket” is self-explanatory; other names are cave cricket (because some species are cave specialists), spider crickets (because of their long, skinny legs), cave wētā (if you’re in New Zealand), sand treaders (because some family members are specially adapted to tunnel deep into sand dunes), kamado-uma and benjo korogi (“toilet cricket,” if you’re in Japan), Hogan bugs (no idea), and sprickets (spider + cricket). 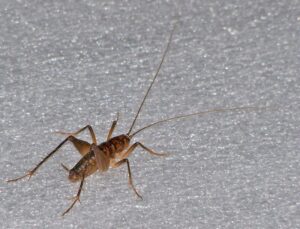 Camel crickets are not just nocturnal, they actively avoid light. They’re often found in woodlands, in cool, dark, damp microclimates like leaf litter, stumps, in and under rotten logs, in caves, under dense ground cover, and in animal burrows. They also are at home in man-made structures like old mines, wells, sheds, stacks of firewood, crawl spaces, and basements (they tend to come indoors when it’s too hot and dry for them outdoors); and one Asian species that likes greenhouses has, unfortunately, become a world traveler. A basement that has camel crickets is a basement that has dampness issues.

Our native species of camel crickets are all built from pretty much the same blueprint – small body, camouflage coloration, no wings, long spindly legs (they’re great jumpers), and really long antennae. The spines on a male’s legs are used to fight other males and to grasp females. Females have a straight, sturdy ovipositor (not a stinger) at the rear that’s flanked by two cerci; males just have cerci. The nymphs, which resemble mini-adults, may look translucent. Not surprisingly, some camel crickets can be very hard to tell apart, except by an expert with a microscope.

Camel crickets are omnivores/detritivores, and they eat fungus, bits of decaying plants and animals, plus the occasional live insect, including small camel crickets (see – they’re actually helping to sanitize your basement!). Unfortunately, they sometimes nibble on papers and fabrics that are stored in basements.

They are important members of food webs because they make small pieces of food into even smaller pieces for even smaller animals, and they’re eaten by many predators. Granted that they are startling-looking insects (that don’t bite or sting); the species that do come indoors do very minor damage, and they rarely reproduce inside unless conditions are perfect, and yet the vast percentage of the internet hits are exterminator companies. Don’t want camel crickets (or fishing spiders or Asian multicolored ladybugs or box elder bugs or house centipedes or brown marmorated stink bugs) in your house? Keep the basement dry and seal potential entrance holes around foundations, doors, and windows.

They are considered “primitive” Orthopterans, but their sensory systems are first class. Their eyes probably distinguish light from dark and don’t transmit images (animals that live in the dark don’t need their eyes much), but other senses fill in the gap. Those long antennae are super-sensitive, giving them information about obstacles and air temperature and about the presence of passing cave crickets, who they find by touch in the darkness. Their cerci tell them about air currents, humidity, and temperature, and tiny hairs all over their bodies have nerve endings. Mouthparts called palps hold taste buds and, with the help of the antennae, aid in finding food, as do olfactory organs on their bodies. They can’t hear – they are silent and therefore earless – but researchers are studying the role of vibrations in camel cricket communications. 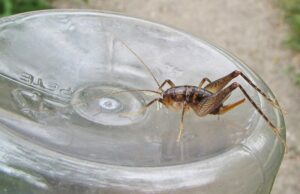 Because they are nocturnal and secretive, parts of their biographies are still sketchy, but the (wonderful) animaldiversity.org website offers a detailed account of the lifestyle of the closely-related Black-sided camel cricket (Ceuthophilus latens). Here’s their description of its courtship:

“Mating takes place at night. ……. If the antennae of two potential mates touch, the individuals will briefly “fence” and hit their antennae together. Males can identify females once a part of the female body comes into contact with the male antennae or palps. To initiate mating, a male backs toward a female and put his cerci underneath her abdomen. He clasps and unclasps his cerci, apparently trying to lift her abdomen above the ground. If the female does not immediately lift her abdomen, the male will crawl all over her body, feeling with his antennae, mouthparts, and cerci. He also vibrates his antennae. Females do not play an active role in courtship; they either mate or walk away … [and if she disappears into the darkness, he does not follow]…. Copulation lasts 2 to 12 minutes, during which both males and females remain relatively inactive. The male passes spermatozoa to the female ……

Ceuthophilus latens is polygynandrous, with both males and females mating with many individuals. ….. If a non-mating male approaches a mating pair during copulation, the male will defend his mate, even dragging the female along to do so. ….. Ceuthophilus latens females are known to practice sexual cannibalism on males. A female sometimes will eat the head of her mate while the male is still alive. This likely occurs when the female is hungry and the male mate is particularly weak. One study showed that all C. latens males had died within two weeks of copulation, while the females in the study continued to thrive. In another study, the bodies of males left with large groups of females were later found to be shells with the soft parts eaten away.”

Researchers have discovered that some camel crickets seem to deploy and to sense pheromones (chemical scents) but are unsure if/how these may be used in courtship.

The female lays a few eggs at a time in a few different locations, maybe up to 60, but no one knows for sure, using her sensory cerci to determine whether the site has the right temperature and humidity, and she dies several days after she lays her final eggs. Camel crickets may overwinter either as nymphs or adults, and they may live as long as two years.

Fun Camel Cricket Fact #1: A carving of a camel cricket dating from 17,000 to 12,000 years ago was found in a cave in France, suggesting a long cohabitation with humans.

Fun Camel Cricket Fact #2: As one website said, “They don’t bite, they spend a lot of time cleaning themselves, and so are quite clean, despite their wet-looking fawn coloring.” Another suggested that they make good pets.

For more information about these fascinating insects: there is a wonderful chapter about them in Broadsides from the Other Orders by Sue Hubbell. The BugLady recommends this article posted on what seems to be a neat website on “Meet the Camel Cricket” by the Infinite Spider, and this one (which she hopes is not behind a paywall), despite its overly-long “EEK-I-see-a-Bug!” intro, “Out of the Darkness” by The Washington Post. The authors have some interesting thoughts about how many insects it takes to support the human population of the globe and how close we might be getting to that particular tipping point.