Warning: This episode comes with a Parentheses Alert. As the poet, John Ciardi once said “My life is lived in parentheses.” It also has a “Multiple References Warning.” The BugLady includes the names of her favorite sources so BugFans can research further information for themselves. Don’t disappoint her.

The butterflies of early spring are the Angle Wings and Mourning Cloaks that have spent the winter as adults pumping, not iron, but antifreeze. Cabbage Whites/Cabbage butterflies are among the first butterflies to appear that have actually emerged from a chrysalis in the current year, and they are followed soon afterward by the closely-related Sulphurs. Both are in the family Pieridae, the Whites and Sulphurs. These medium-sized (2” wingspan) white or yellow butterflies may be monochromatic or they may add black wing tips and some spots. Cabbage butterflies are white and Sulphurs are yellow—except when they’re not. Read on.

The Cabbage White Butterfly (Pieris rapae) (the rapae part comes from its larva’s fondness for plants in the mustard/cabbage family) is actually an alien (Eurasian) butterfly that drifted south after its accidental introduction to Montreal about 150 years ago. Like other introduced species, it liked what it saw—many of its favorite foodstuffs were agricultural crops that had already leapt the Pond—and it liked what it didn’t see, its native predators. Its caterpillar became a serious crop pest that was, for years, known as the “Imported Cabbage Worm” (the BugLady once heard that the annual, per capita consumption of cabbage is 10 pounds, and she is ecstatic about any assist from cabbage worms). The species has been subjected to chemical and biological warfare in the form of pesticides, bacterial and viral infections, and (alien) parasitic wasps, some of which methods are not too specific about what they kill (Mother Nature doesn’t like “collateral damage”). In some cases (like DDT), the cure has been worse than the disease, and yet, the Cabbage Whites keep coming. 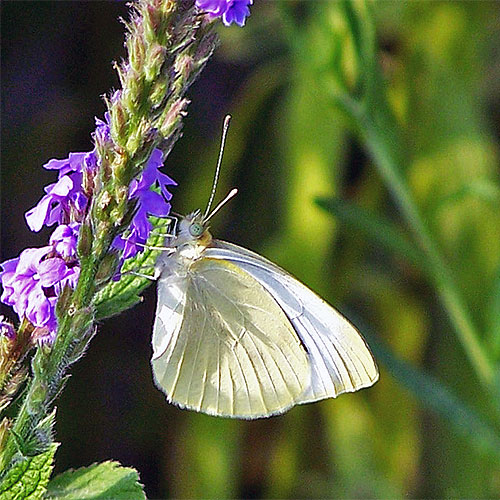 Eggs are laid on the undersides of leaves, and there the caterpillars stay. They especially like cabbage leaves, though they do attack native mustards. If a hole appears in a cabbage leaf and you can’t see the hole-maker, flip the leaf over and check for a small, green larva.

Adults are strong fliers that nectar at a variety of flowers. They are most active during mid-day in open/cleared/weedy/cultivated/fields/meadows/gardens/road edges in cities and suburbs and rural areas (in short, they are habitat generalists). The BugLady found one tantalizing reference to their activity during the “graveyard” shift, the hours before dawn. Cabbage whites are hardy and they live fast, going from egg to adult in little more than a month. Several succeeding generations keep us in Cabbage whites from early spring through the first hard freeze of fall. They are suspected to have displaced a few native species of Whites, though habitat destruction was undoubtedly also a culprit.

Common/Clouded and Orange Sulphurs (Colias philodice and C. eurytheme) are the most common Sulphurs in southeastern Wisconsin. They are very closely related and they do hybridize. The upper sides of a Clouded Sulphur’s wings are yellow, and as you might expect, the upper sides of an Orange Sulphur’s wings have varying degrees of an orange tinge. Sulphurs tend to fold their wings immediately after landing, so identification is best made when the butterfly is in flight or in-the-hand (a strongly-colored Orange Sulphur may show an orange tinge on its underwings at rest). Populations of both Clouded and Orange Sulphurs produce some white females (called alba females), so beware—a white butterfly with black wing-tips is not always a cabbage butterfly! These alba females are larger than their yellow sisters and they lay larger eggs, a reproductive adaptation to living here in the north country. 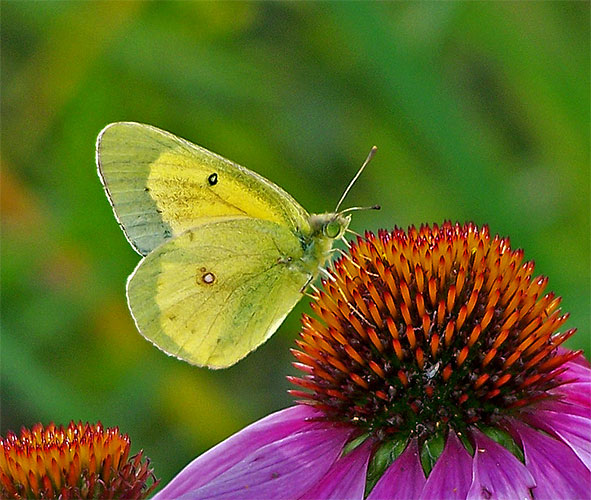 Where Cabbage Whites favor mustards, Clouded and Orange Sulphur caterpillars like legumes (the bean/clover family). Like the Cabbage butterflies, adult Sulphurs are found in a variety of open habitats, where they nectar on flowers in the milkweed, composites/aster and bean families. The sight of hundreds of Sulphurs flickering over a field of alfalfa on a mid-summer afternoon is truly grand! Sulphurs also famously gather in groups at puddles to sip the nutrients found in mud. According to Weber’s Butterflies of the North Woods, the Orange Sulphur is a southern butterfly that has extended its range dramatically in the past century (helped along by changing agricultural patterns). Of our two Sulphurs, the Orange Sulphur is less cold-tolerant. 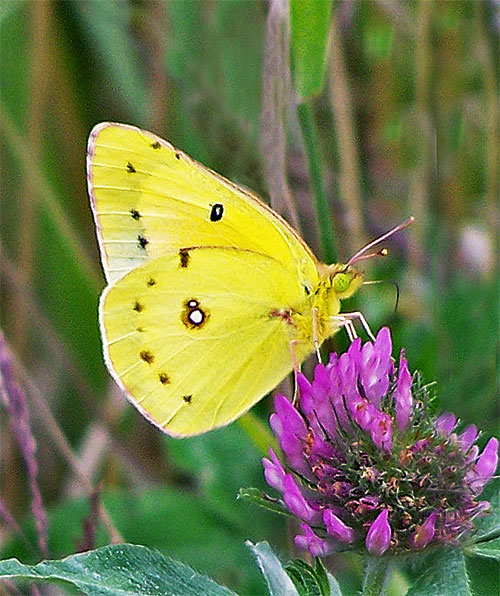 Check out A Guide to Observing Insect Lives, by Donald W. Stokes for a great description of spiral flights, an interesting and highly ritualized behavior that is shared by the Cabbage Whites and the Clouded and Orange Sulphurs and, for all the BugLady knows, by other Pierids as well. Spiral flights are “Bug off, Buster” flights initiated by females in response to unwanted attention from a male with romance on his mind. Or by males responding to advances from nearsighted males that have made a gender misidentification (according to Stokes, it is believed that many butterflies cannot recognize even their own species until they are within about a foot of each other). 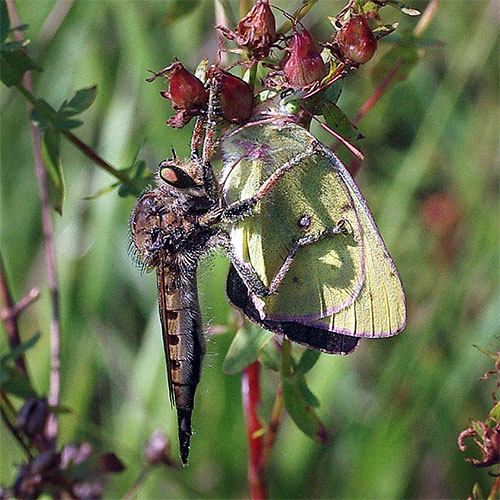 The BugLady highly recommends Mike Reese’s excellent Butterfly site: Butterflies of Wisconsin for information about our butterflies, their flight periods and their distribution, along with dynamite pictures. Brock and Kaufman’s Field Guide to Butterflies of North America is a good field guide.