The BugLady photographed this sturdy beetle one mid-spring day on water buttercup, and it took her a long time to stumble across what she hopes is its identity. It has no common name so the BugLady arbitrarily dubs it the buttercup beetle (Prasocuris vitatta) – bb) (lower case). Prasocuris vitatta has gone through a half dozen Scientific names in the past 230 years, sometimes losing, then regaining the species name vittata, which means having a streak or band of color (and once being promoted to trivittata). Bugguide.net calls it “an uncommon black-and-yellow striped species found on Caltha palustris” (marsh marigold), which will be blooming soon. Honest. It’s a member of the huge family Chrysomelidae (the leaf beetles).

Bb’s habitat needs often involve sunny wetland edges in the eastern half of North America where members of the buttercup family grow, and they’re also found on the introduced Common/meadow/tall buttercup that grows along roadsides and woodland edges. This beetle was photographed on water buttercup, whose flower stalk extends a few inches above the water’s surface. 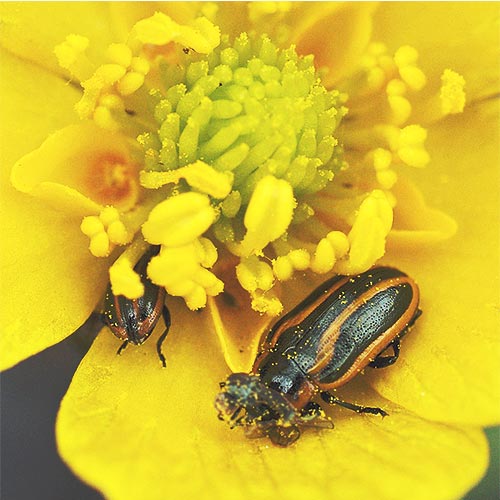 To say that there isn’t very much information out there about buttercup beetles would be an understatement, and there’s scarcely more about the other three members of its genus that reside in North America. They operate below the radar; their internet presence consists largely of pictures (or not) and of mention on various national/state/park/museum collection catalogs. The related Prasocuris ovalis, about which internet sources say “Images not available, description not available, map not available,” also eats buttercups.

Both the adults and larvae lunch on buttercup leaves, with the larvae generally feeding on the undersides of a leaf. Adults will also eat nectar and pollen. Buttercups notoriously contain caustic chemicals (in olden times, beggars would rub the juices of Tall/Meadow buttercup on their skin to raise blisters and so, to look more pitiful). Like the larvae of the Imported Willow Leaf Beetle, of recent BOTW fame, the defense systems buttercup beetle larvae may enjoy a chemical boost from the plants they eat.

Buttercup beetle oddity #1: Though most references say that they are found on plant surfaces at the water’s edge/above the water line, they are mentioned in a publication called “Semiaquatic Chrysomelidae of Michigan.” And according to Entomologia Edinensis, or a “Description and History of the Insects Found in the Neighborhood of Edinburgh [Scotland]” (1834), the larvae of another member of the genus, Prasocuris phellandrii, “inhabit the interior of the stalks of aquatic plants, on the leaves of which the perfect [adult] insects also feed.” 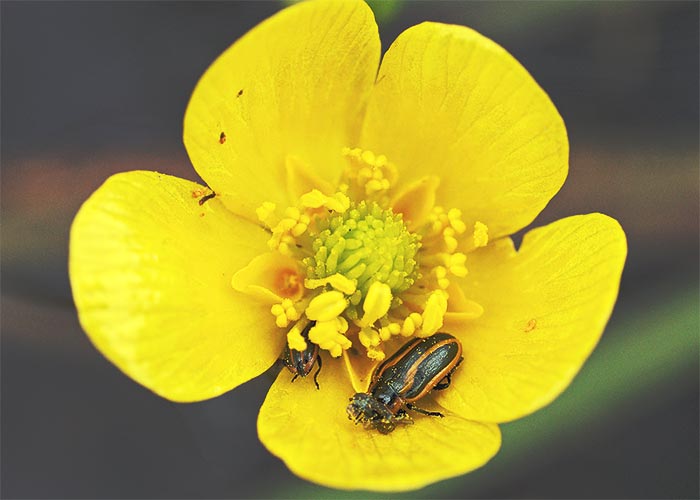 Buttercup beetle oddity #2: A paper titled “External parasites of birds and the fauna of bird’s nests,” published in 1925, lists the buttercup beetle among species found in the nests of Bluebirds and Robins in the winter (when the birds are not using them). According to the study, these were adult beetles that, it was hypothesized, were hibernating/sheltering in the nest. The BugLady was not able to find out anything about the life history of bb’s, but this study suggests that they might overwinter as adults. 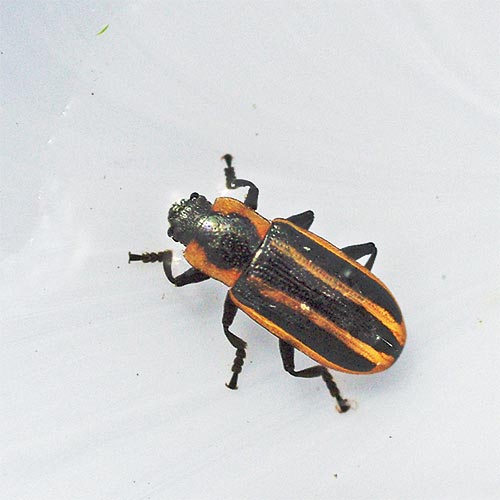 Speaking of Prasocuris phellandrii. About two weeks after she photographed the buttercup beetle on the water buttercup at the ephemeral pond, the BugLady found another vitate beetle in the same location. It sure looks like Prasocuris phellandrii, but we’re out on that limb again. Prasocuris phellandrii is a European-Middle Eastern beetle that has made its way across The Pond and now can be found across much of North America. It likes wetlands, where it feeds on flowers and leaves of water parsnip – and, yes, marsh marigold.

Side note: Visit an ephemeral pond near you. The fairy shrimp are in residence. Don’t miss the show! 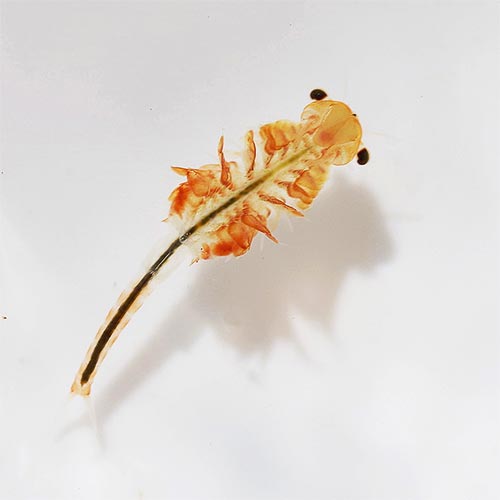