When the BugLady posted this last night, about 100 of them, from BugFans of all internet persuasions, bounced back. Trying again. Apologies if you got this twice.

Back in the summer of 2009, the BugLady found a spectacular grasshopper in the UWM Field Station prairie (she waded in, her desire to photograph it outweighing apprehension caused by the number of chiggers that live in that particular bit of grassland). It was a Short-winged Bunchgrass Locust/Grasshopper (Pseudopomala brachyptera) (brachyptera means “short-winged”), also known as the Short-winged Toothpick Grasshopper, and she issued a special Bonus Bug (an “in-between episode”) to celebrate it. This is a revision of that post, with some new information. 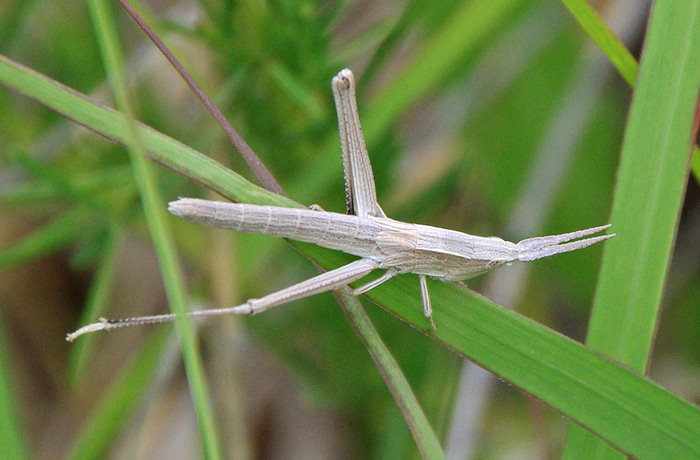 SWBGs are located in the Short-horned Grasshopper family, Acrididae, which BugFans have visited before in the form of the Meadow, Pine-tree spur-throated, Green-legged, and Green striped grasshoppers, and the Red-legged grasshopper/locust and Carolina locust. There are about 8,000 species in the family worldwide, 620 in North America, and some species can occur in plague-sized quantities. They’re in the Slant-faced grasshopper subfamily Gomphocerinae and in a group called Mermiria – the Toothpick grasshoppers.

The last time the BugLady wrote about grasshoppers/locusts (whose names, at least in the common usage, are often interchangeable) a knowledgeable BugFan sent her an explanation of the distinctions, which the BugLady “saved” but which (apologies) is nowhere to be found. Here’s how Wyoming Extension Entomologist Vsevolo Latchininsky explains it in an article in the Encyclopedia of Animal Behavior (2010). “All locusts are grasshoppers but not all grasshoppers are locusts.” Locusts, he continues, are “short-horned grasshoppers (Orthoptera: Acrididae), distinguished by their density-dependent behavioral, physiological, and phenotypic polymorphism.” That sentence takes a little unpacking.

Polymorphism refers to an organism that has several forms, like Mallard Ducks, with showy males and camouflaged females; and phenotypic refers to appearance. When they occur in “normal” numbers, these grasshoppers are just grasshoppers, hopping around, solitary except when breeding. When they have a population boom, usually in response favorable weather and a bumper crop of their favorite food, a very small number of species may respond by producing a generation that is gregarious, which can lead to swarming (density-dependent behavioral polymorphism), and that looks different because of changes in color or body structure (phenotypic polymorphism), and then we call them locusts.

Along with that distinctive face, Slant-faced grasshoppers tend to have clear-to-yellowish/bluish hind wings that may be darker on the trailing edge, and they have a raspy area/file on the inner side of the hind femur that they rub against a similarly raspy area on the front wing to make sound (stridulate). Males “sing” to females during courtship. Their head shape causes some people to mistake them for walking sticks, and like walkingsticks, their slim legginess allows them blend into a grassy thicket. The technical term for their wild-looking antennae is ensiform (from the Latin enis – sword, related to the Sanskrit asi, also meaning sword). 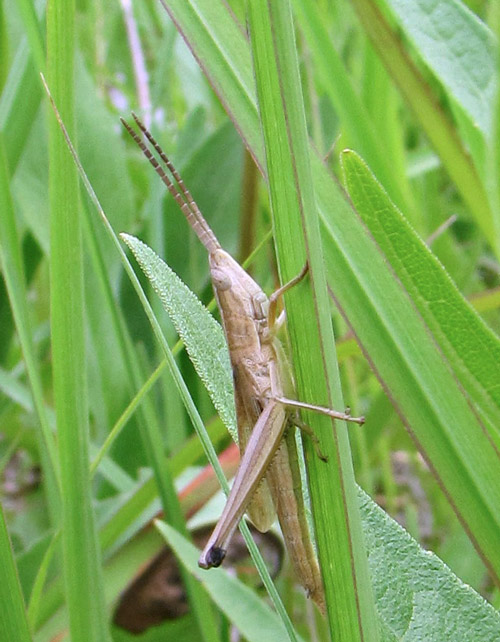 If, like the BugLady, you appreciate old scientific illustrations, see this 1902 drawing.

SWBGs display sexual dimorphism – males are slightly smaller and darker in color than females and have longer wings (females’ wings are usually less than half the length of their abdomen). The SWBG pictured above is a male, and the one pictured below is a female. 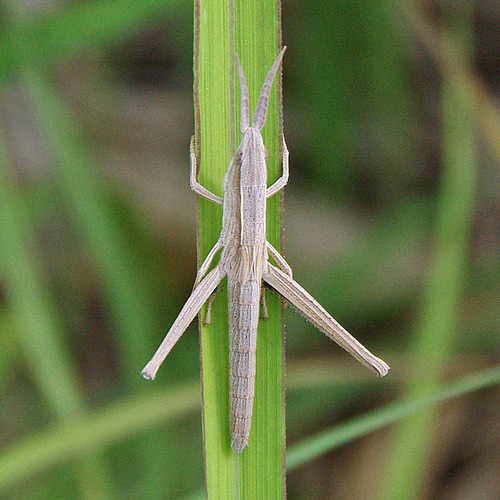 Mermirids tend to be found in areas with thick, damp grass; SWBGs have a preference for tallgrass prairies (they’re sometimes described as an insect of prairie remnants), but they’re also found on poor soils, in sand prairies, and along forest and stream and weedy road edges (long stretches of roadside grasses provide an avenue for SWBGs and other insects to disperse along). Their range stretches from north Texas to Idaho to British Columbia on the west, through the Great Plains and southern Canada, and east through the Great Lakes states to New England, and they’re mostly present in the southern half of Wisconsin. SWBG populations tend to be “local” – found in small pockets over large areas, and both their numbers and their range may be increasing with recent droughts (but they’re not numerous enough to have an economic impact).

Their short wings suggest that migration is unlikely, but they are terrific hoppers, and they like to play peek-a-boo from the opposite side of a grass stem.

There’s not a huge amount of information out there about the population, reproduction, and daily schedule of SWBGs (a testimony to the low profile they keep). Eggs are laid in late summer, and they probably overwinter in the egg stage; adults hop around throughout summer, not far from the areas they occupied as nymphs. SWBGs feed on a variety of grasses (including Kentucky bluegrass) and a few sedges.

Thanks to BugFan Dennis for two corrections of last week’s episode about the Rusty-patched bumble bee. This bee is listed as an Endangered species in Wisconsin (insufficient scholarship on the BugLady’s part), and the bumble bee that had the unfortunate encounter with the ambush bug is likely a Red-belted rather than a Brown-belted bumble bee. Thanks, Dennis.

It takes a village.