The BugLady has been out enjoying the spring warbler migration, and as she searches the branches for birds, she’s also loving the soundtrack – the echo of Wood Thrushes and the buzz of early bumblebees. She wrote this episode ten years ago, and then in 2014, she “Celebrated Bumblebees.” Here’s an updated version of the 2008 episode – some new words, all new pictures: 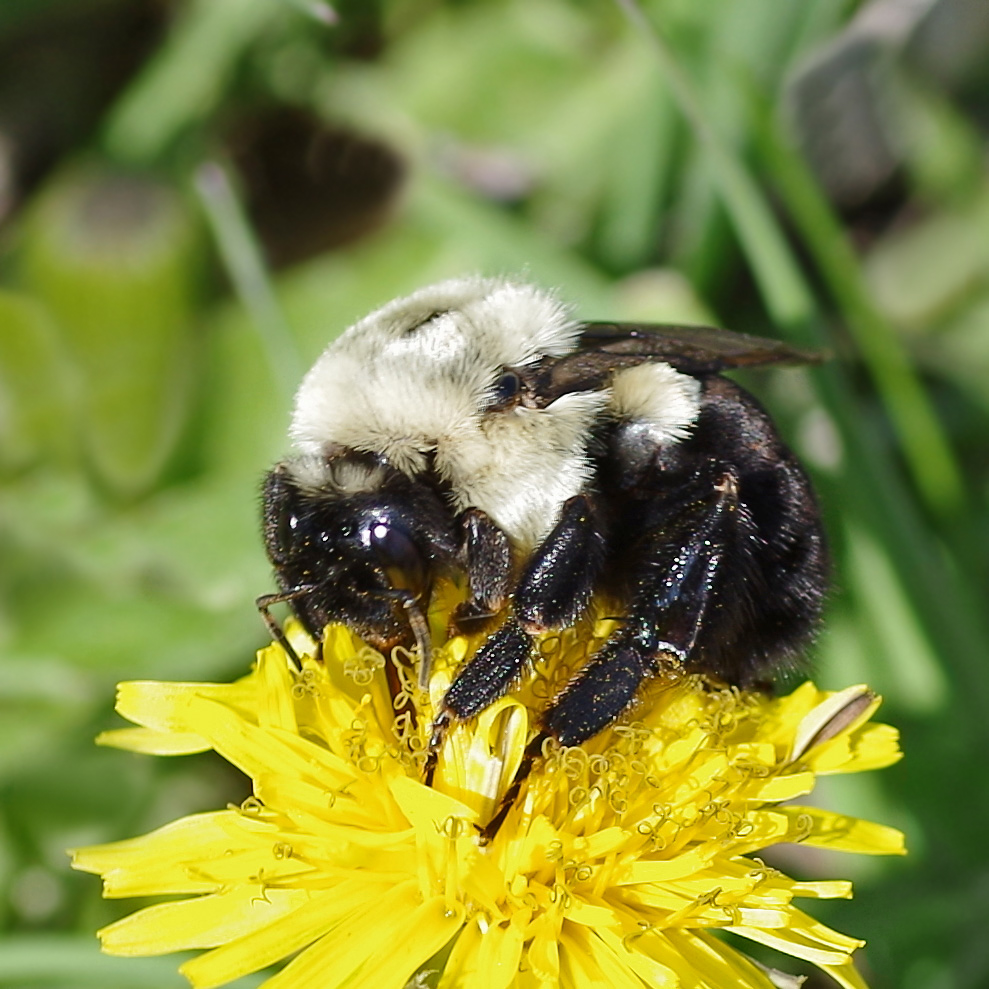 The impressively-sized bumblebees that visit spring’s early flowers are the queens, newly emerged from their underground winter shelters. Bumblebees do not store food over the winter, a la honeybees, and only the fertilized queen survives until spring because she is better nourished than the workers. There are 46 species of bumblebees (family Apidae) north of the Rio Grande, and they emerge at different times of the spring and early summer. 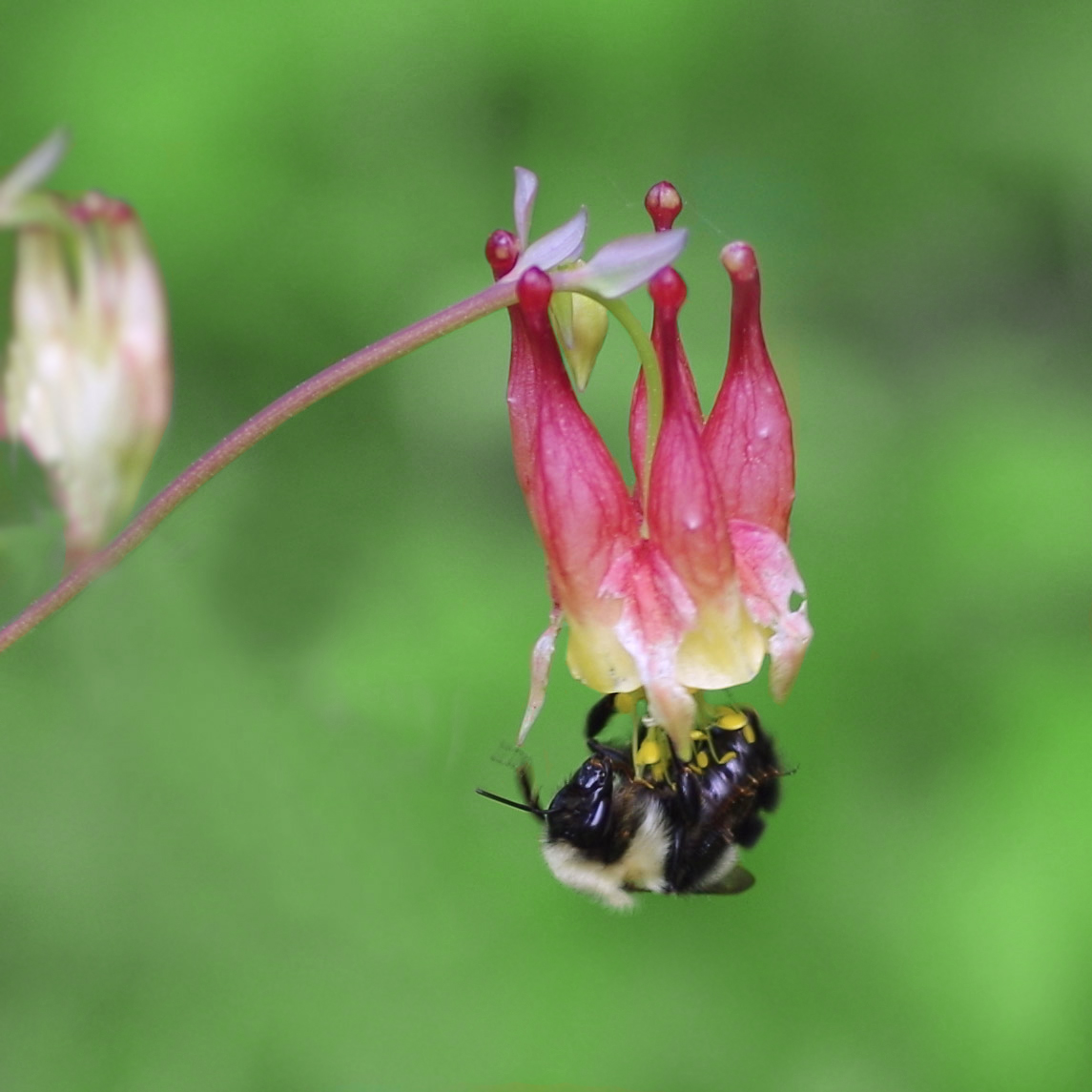 Their bodies are plump, and their wings are too small for their bulk (bumblebee flight was long thought to be mathematically impossible), and they are clumsy fliers. They have a fuzzy thorax and a hairy abdomen, and a yellow and black color scheme (Mother Nature’s warning colors). Their antennae are short, and their mouths are shaped for biting as well as sucking. Yes, they will sting to defend hearth and home, and their hidden nests surprise pedestrians, outdoor workers, and livestock. 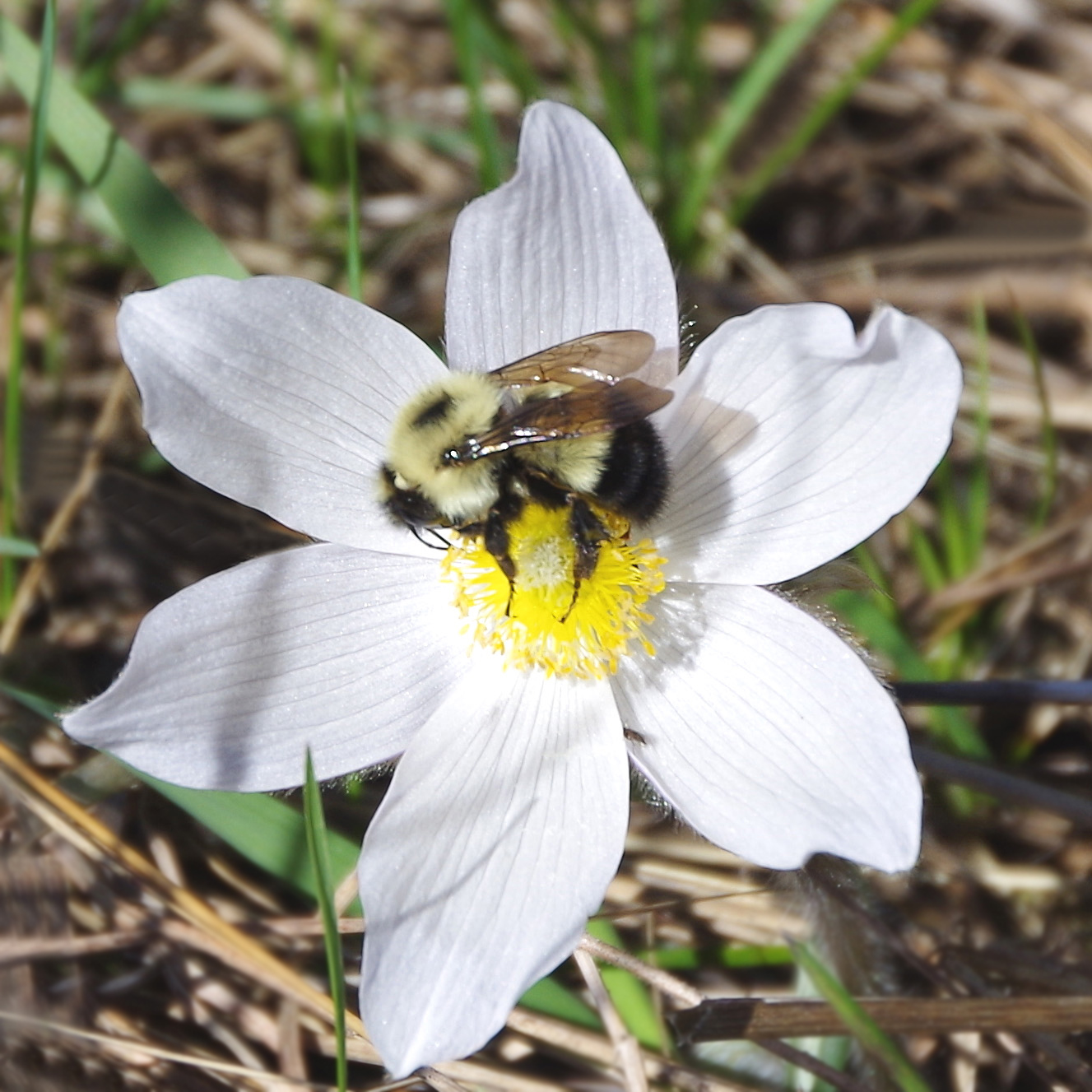 Bumblebees emerge early to claim the limited available nest sites, but their extra hairy bodies are well insulated against the chill of April. In the dandy Field Guide to Insects of North America, Eaton and Kaufman refer to bumblebees as an essentially “warm-blooded bee.” This housing crunch also causes the queen to camouflage her nest by piling dried vegetation outside its entrance when she leaves. Even so, an interloper queen may discover a nest site and evict a resident queen.

After the queen locates a cavity – underground in a deserted rodent burrow or in the walls of an old building or even in outdoor furniture – she makes a nest of moss and grass, and lays eggs (400 to 1,000) in a disorganized array of wax cells. She sits on them for four or five days to keep them warm (maternal solicitude is uncommon in invertebrates). When the larvae hatch, they feed on a mixture of pollen and nectar. Some species provide a cache of pollen for the larvae to nibble on, and others regurgitate nectar and pollen into individual larval cells. Four to five weeks after the eggs were laid, the newly-minted adults (sterile female workers) emerge from their cocoons to gather pollen and nectar and care for the queen and her future broods. Fertile males and females are produced in late summer. 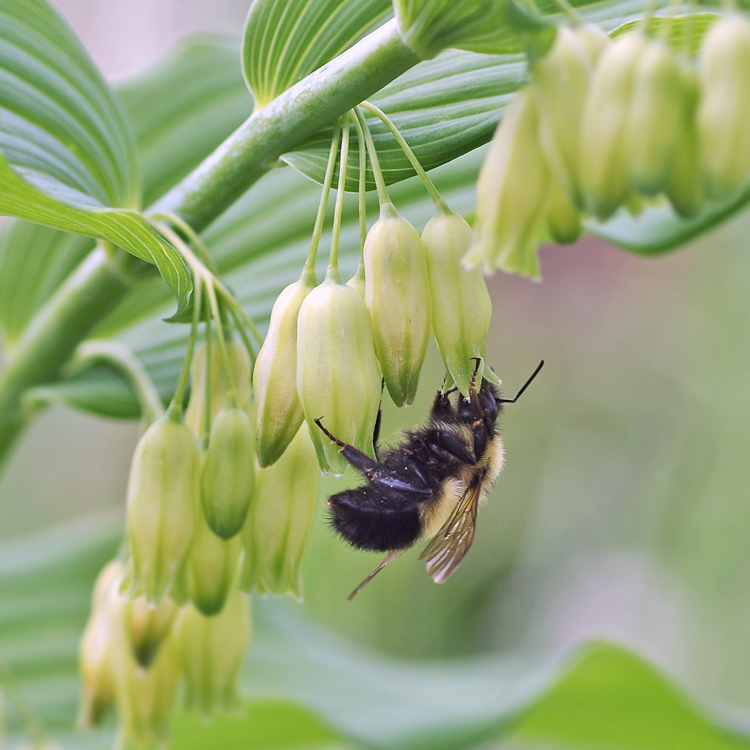 Kaufman and Eaton say that bumblebees “buzz pollinate” some blossoms – they set up a vibration that causes pollen to be rain down on them. Though they feed protein-rich pollen to their offspring, adult bumblebees mainly eat high-energy nectar, collected from a variety of flowers (they are generalist feeders). Different species of bumblebees have tongues of different lengths, and this governs their flower choices. They’re also “muscly” pollinators, able to force their way into flowers that other bees can’t. 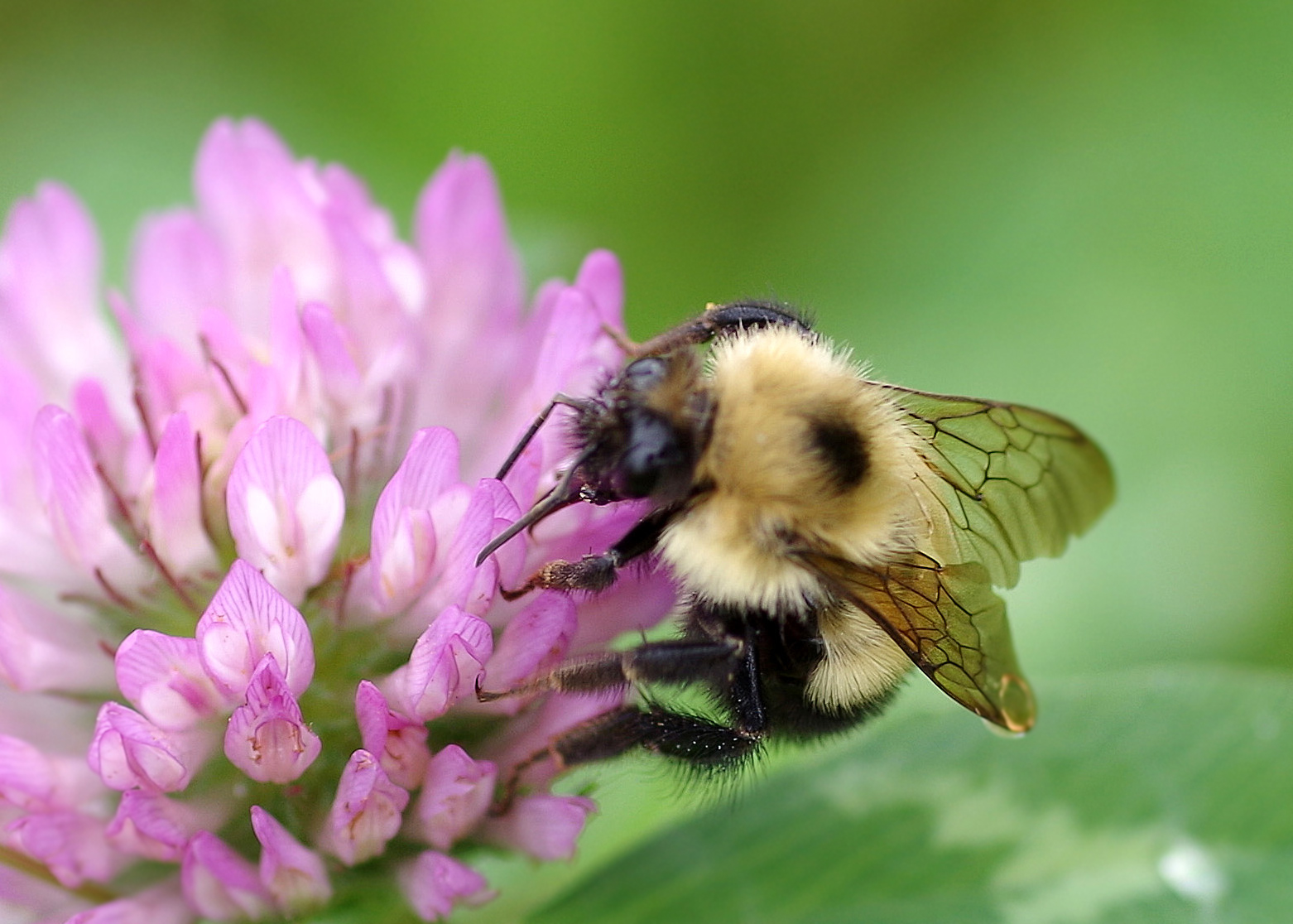 [Quick aside – The BugLady gave a program about native orchids a few years ago. Some species of orchids are pollinated by “naïve bumblebees.” Naïve? Many orchids have alluring arrangements of flower parts but little or no nectar to reward those who visit. Bumblebees may be fooled once or twice, but sooner or later they catch on and eschew the orchids. The orchids, therefore, are pollinated by bumblebees who haven’t caught on yet.] 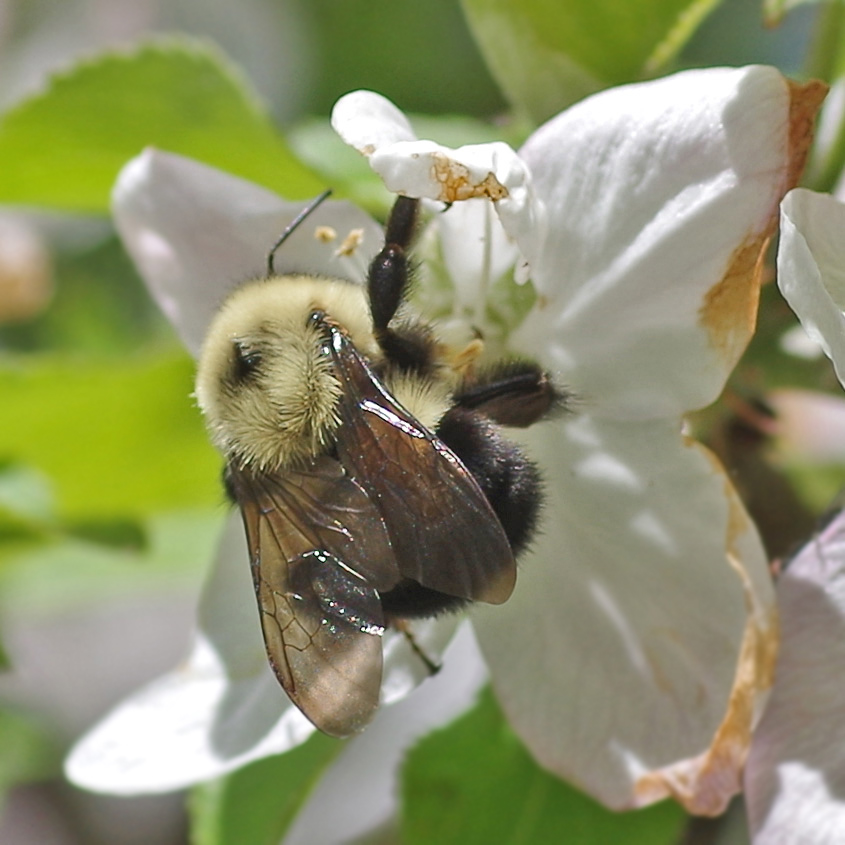 Not all bees are social – in fact, most are not. Bumblebees are our only native social bees (like most of our ancestors, honeybees came over on the boat).

The BugLady, who enjoys etymology as well as entomology, is pleased to report that “bumble” is derived from a Middle English word (bumblen or bomblen) meaning “to boom.”

Nota Bene – The BugLady pulled off her first deer tick of 2018 last week.