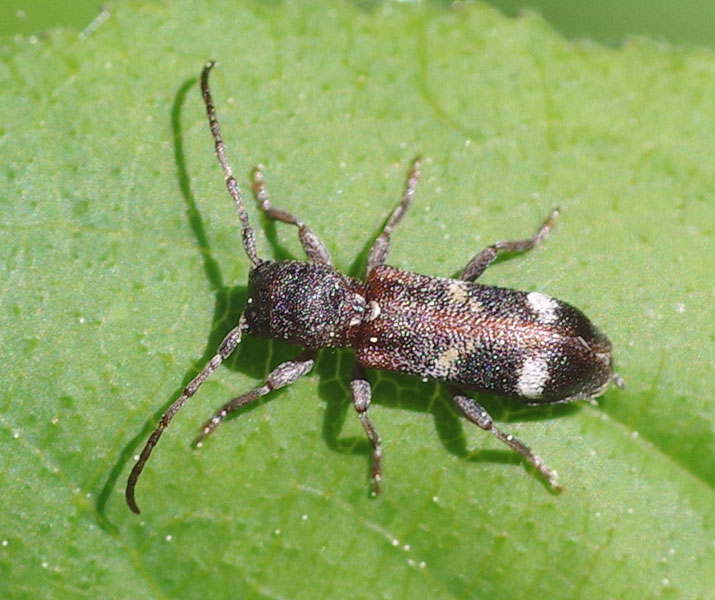 It’s time again to celebrate the bugs that fly under the radar – bugs that are neither famous nor infamous and that live alongside of us, about whom not much has been written. All three of these species, coincidentally, have their flight periods in the first half of the summer. 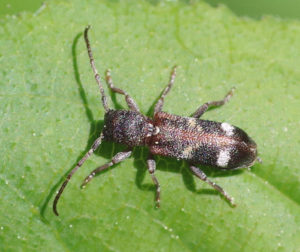 This beetle is a poster child for insects that are barely visible online, although unlike many, it has picked up a common name along the way.

The Currant tip borer (Psenocerus supernotatus) is a not-very-long-horned member of the long-horned beetle family Cerambycidae. The long-horned (long-antennaed) beetles are divided, uneasily and depending on whose book you read, into 10 subfamilies, and the Currant tip borer’s subfamily, Lamiinae, the Flat-faced Longhorns, includes about 20,000 of the 30,000 species of Cerambycid worldwide.  There are 5,000 species in the New World, but only 250 of them occur in North America.

This little beetle (about 1/3”) can be found in early summer, east of a line from Manitoba to Texas. Its larvae feed within the dead branches of a variety of woody plants, and it’s been found on oak, Virginia creeper, poison ivy, sumac, catalpa, and mulberry as well as currant and gooseberry. Considering its name, the BugLady was expecting to find a bunch of Extension Bulletins telling us how to protect our gooseberries and currants, but she found none.

Mr. R. P. Dow, writing in the Bulletin of the Brooklyn Entomological Society in 1916, recounts how he found some Currant tip borer larvae in sumac pith. First to hatch were two males that, after exploring their surroundings, began to fight by a specific spot on the twig. Two days later, a female emerged from that spot. He wrote, “It is evident that some sense organ revealed the female to the males not less than 36 hours before her emergence from the unmarked wood.”

One source writes that the adults look ant-like . Hmmm – the BugLady doesn’t see it 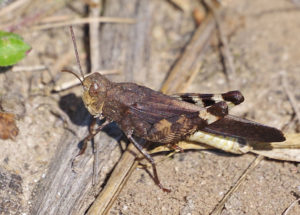 The BugLady automatically surveys butterflies and dragonflies as she walks – it’s like breathing. From mid-summer on, she sees Clouded Sulphurs over the grasslands (bugguide.net informs the BugLady’s spellcheck that “both spellings of “sulphur” or “sulfur” are seen frequently. The first prevalent in older works, with the second becoming more common in recent decades”). With black-bordered, lemon-yellow wings, the butterflies are almost unmistakable. (This is a remarkable shot, and not just because it shows the black edges on the upper surface of the wings . Sulphurs perch with their wings closed, so the black border is seldom photographed).

Sulphur-winged grasshoppers are found in grasslands, edges, and sometimes in open woodlands east of that Manitoba-to-Texas line, and north just into Canada. They feed primarily on grasses, with a few wildflowers thrown in for good measure, and unlike many grasshoppers, they don’t eat any animal material. Bugguide.net tells us that both males and females “crepitate” (make snapping/crackling/popping sounds with their wings) during courtship displays. Adults can be seen starting in early spring and are gone by mid-summer. 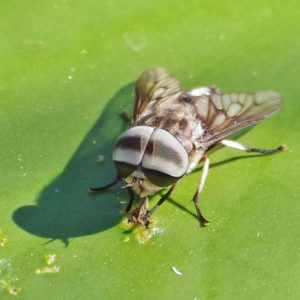 In early summer, the BugLady spied this impressive male horsefly eyeing her from a lily pad (male, because its huge eyes meet in the middle – all the better to see you with…..). Horse flies and deer flies are in the family Tabanidae. For “Horse fly 101,” visit here.  Many species are also called Greenhead flies (visit the Atlantic coast in summer to get the full Greenhead experience), and many have spectacular, Technicolor eyes that make them the darlings of macro photographers.

They’re the flies we love to hate. In The Tabanidae of Minnesota (1930), author Cornelius B. Philip anthropomorphizes, “After feeding to satisfaction, the fly may withdraw and make new stabs, apparently for the pure love of it…….”

The Three-spotted horse fly (Tabanus trimaculatus) is one of about 100 genus members in North America, and it will not surprise southern BugFans to read that the genus is most diverse in the their neck of the US. According to bugguide.net, tabanus was “a name used by the Romans for a kind of biting fly.”

Horse flies lay their eggs in clumps on vegetation , in damp areas. When the eggs hatch, the tiny, carnivorous larvae drop to the ground or into a “semiaquatic habitat” and burrow into the soft soil, where they find small invertebrates to eat. They’re eaten, in turn, by nematodes and mud-probing birds, and they’re parasitized by sand wasps, tachinid flies, and chalcid wasps. Here’s an interesting shot of a ladybug larva grazing on horse/deer fly eggs , and a shot of an older, generic Tabanid larva .

TSHFs are fairly early-season horse flies that seem to prefer woodsy settings – researchers in the Minnesota study found that “the larvae outnumber by far any other species taken but the adults seem to have retiring habits in Minnesota.”

From what the BugLady could find, the TSHF is not a notorious scourge of man or beast. Yes, female horse flies need the protein from a blood meal in order to produce eggs, but both females and males also feed on nectar. In a study to discover which species of horse flies were most annoying to deer in Oklahoma, four species made up 95% of the horse fly attacks, and although the TSHF was abundant, it was not seen feeding on deer.