Another celebration of (regrettably) anonymous bugs. There are in the neighborhood of 100,000 insect species in North America, but not everyone has a biographer (note to self – it takes a lot longer to research the unsung species than the notorious ones). 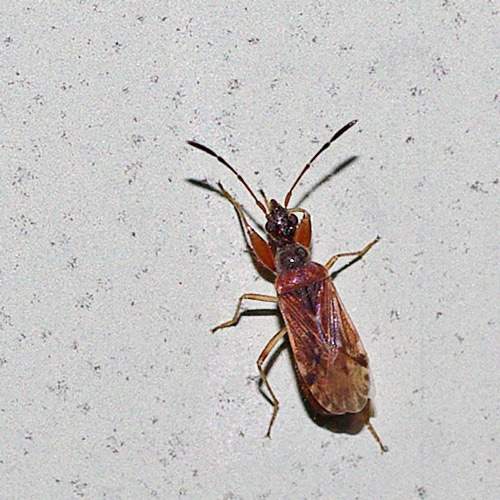 HERAEUS PLEBEJUS (no common name): This pretty, little Dirt-Colored Seed Bug was a “life bug” for the BugLady – she knew it was in the “true bug” bunch, Hemiptera (which narrowed it down to 10,200 possibilities in North America) but she eventually stumbled across its identity and looked it up. When the BugLady’s initial searches for species information draw a blank, she will back up to the insect’s genus and then to its family. In this case, she struck out at pretty much every level – even the venerable An Introduction to the Study of Insects (Borrer and DeLong) in her home library had no info about Dirt-colored seed bugs.

So – it’s in the Dirt-colored Seed Bug family Rhyparochromidae (“rhyparos” means “dirt” and “chromus” means “colored”). Rhyparochromidae used to be Rhyparochrominae, the largest and most diverse subfamily in the Seed bug family Lygaeidae (the family of the familiar milkweed bug). Rhyparochrominae was elevated to family status about 30 years ago, and there’s been a lot of taxonomic fiddling ever since. Most Rhyparochromids feed on seeds that they find on the ground, but some climb up plants for their supper, and there are a few blood-suckers in the crowd. Some associate with ants, and a bunch of family members (but not today’s star), are able to stridulate (make noise by rubbing one body part against another). Most have swollen-looking front legs armed with stiff spines that help them get a grip on seeds. Some Rhyparochromids are economically important (in a negative way).

Heraeus plebejus is the most widespread of the four Heraeus species in North America; bugguide.net says that it occurs in “e. NA to AZ (QC-FL to IA-TX-AZ), Mex. / W. Indies,” and that it’s often found on sumac leaves. Many of the seed bugs are pretty picky about what kind of seeds they eat, but the BugLady couldn’t find out anything about this species’ diet. Insects foraging for seed on the ground probably aren’t choosy. And that’s it. 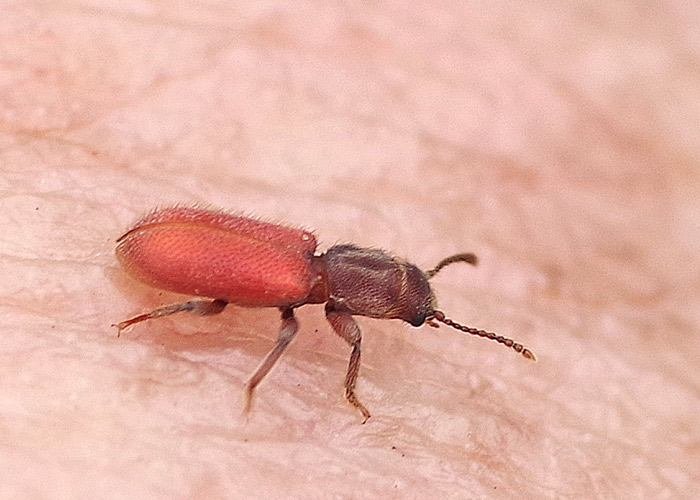 ZENODOSUS SANGUINEUS (no common name) is a member of the Checkered beetle family Cleridae, which we have met before. The Clerids are a group of small, hairy, often-colorful, mostly predaceous beetles, many of whose larvae operate under the cover of tree bark, where they prey on the larvae of a variety of bark and cone-boring insects. Adults feed on adult beetles that they find on flowers and other vegetation (though there are some outlier pollen feeders and scavengers). Some species may prove to be effective biological controls of bark beetles. American Beetles, Volume II tells us that “The higher classification of the Cleridae has undergone considerable categorical oscillations.” 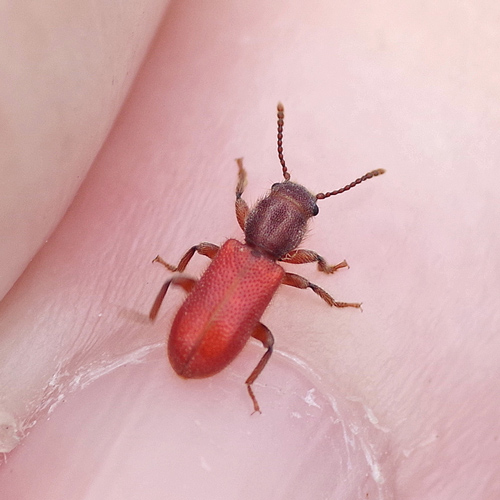 Formerly known as Thanoclerus sanguineus, this little beetle is found from North Dakota to Arizona to North Carolina to Maritime Canada, under bark, in woody tunnels, and in galls and decaying fungi. It is active but shy, and hides quickly when alarmed. Adults overwinter under bark. Other than that, this beetle’s internet presence is mostly on park and natural area biodiversity lists. Click here for a glamour shot. 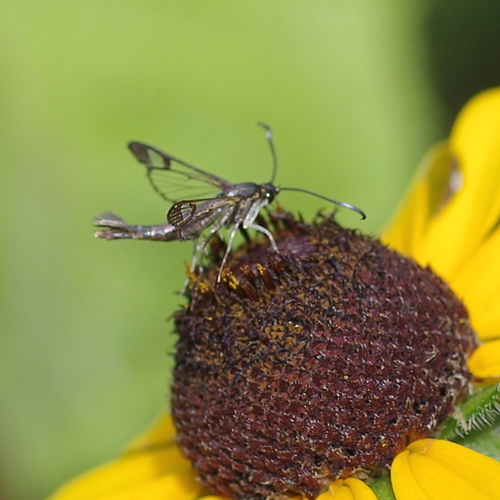 EUPATORIUM/IRONWEED BORER MOTH (Carmenta bassiformis): Two groups of moths are called Clear-winged moths. There are a few moths in the Sphinx moth family, including the wonderful Snowberry and Bumblebee clearwings that hover at bergamot and thistle flowers in summer (and lead the BugLady on a merry chase). The other is the Clear-winged moth family Sesiidae, which we have visited before in the form of the squash borer moth. Their wings are “clear” due to an absence of scales. Many of these odd, little Sesiid moths are more waspy than mothy in appearance; they are bee and wasp mimics, a few even sporting yellow scales where bees would have pollen collecting equipment. Some are agricultural pests and some are quite spectacular, with fancy anal tufts (in one species, the tuft is said to resemble the long, trailing, third set of legs of a wasp in flight). 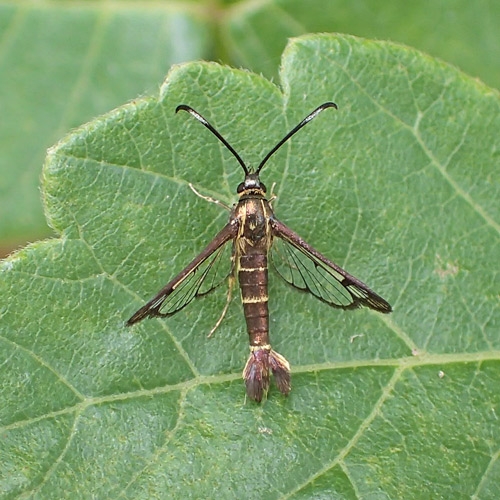 There were actually lots of hits when the BugLady Googled Eupatorium Borer Moth, but the sum total of their information was “larvae feed in the roots of Ironweed, and probably also Eupatorium (Joe-Pye-weed).” Eupatorium moths are found in grasslands and edges east of the Great Plains. Females advertise by emitting “Come hither” pheromones; they subsequently lay single eggs at the base of Joe-Pye or Ironweed plants, and the larvae bore into the roots and feed. They overwinter as larvae and tunnel up into the stalks before pupating in spring. Adults are nectar feeders, and neither stage is considered a pest. Here’s a nicer picture than the BugLady’s.