The BugLady is feeling a little cranky. It’s snowing as she’s writing this – 3” to 5” are expected, and the temperatures predicted for the next week mean that the snow’s not going anywhere soon, so the newly-returned robins, cranes and killdeer will be very unhappy – and she’s leading her first woodcock and frog walk in three weeks (though she has led them with snowflakes in the air), so we need to get our act together.

Anyway. Here are a few insects about which the information is sparse, though they are undoubtedly worthy. 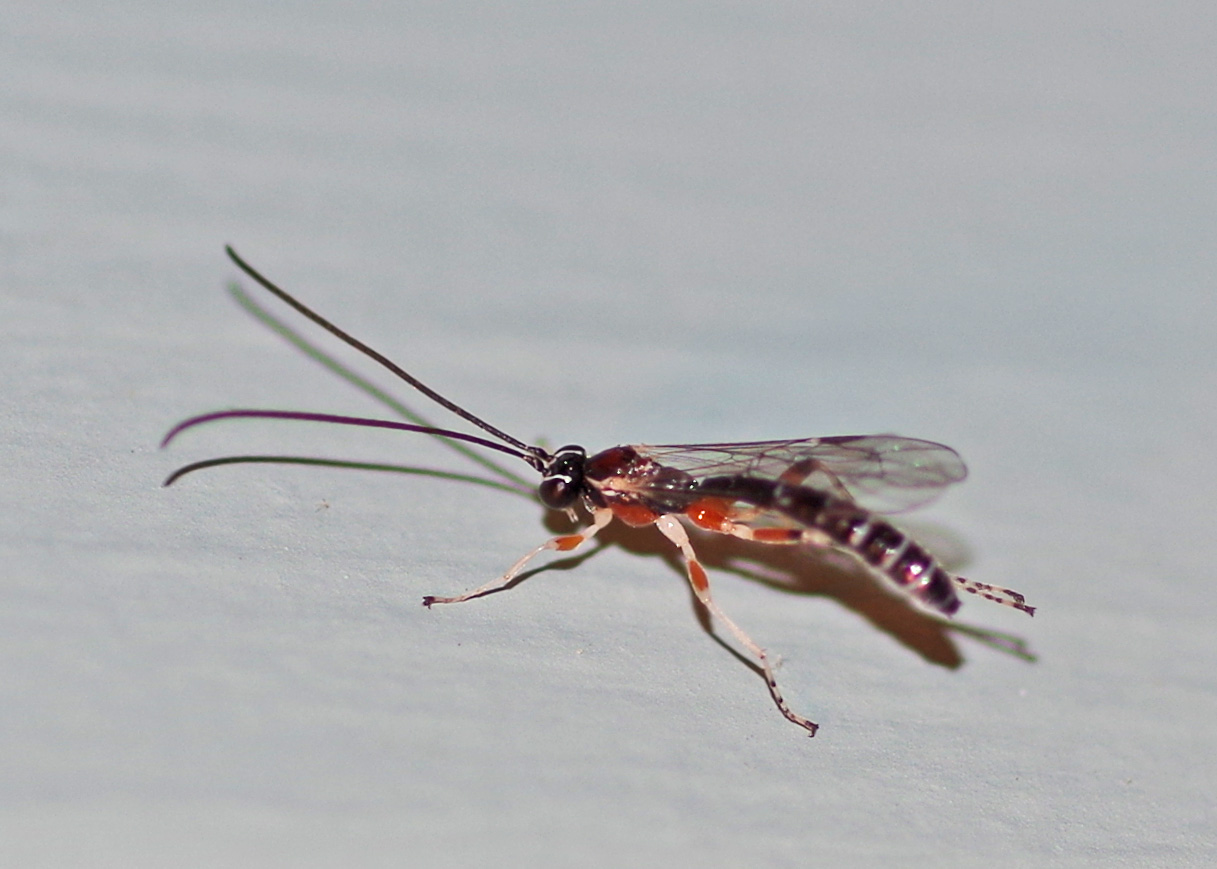 The pretty, little ichneumon wasp Perithous scurra (probably) fits the criteria perfectly for inclusion for Bugs without Bios – there are an estimated 60,000 species in the family Ichneumonidae globally, and there may be another 40,000 awaiting discovery, so who can keep track of all of them? Larvae of the ichneumons are parasitoids – consumers of the larvae and pupae of butterflies, moths, beetles, and other wasps.

This small (maybe ½”) wasp occurs worldwide – there were papers about it from countries across northern Europe, Russia, and Turkey. According to a British website dedicated to identifying Ichneumonids (most of the natural history information that the BugLady found was on British sites), its habitat is hedgerows, and the larval hosts are the larvae of solitary wood and stem-nesting wasps.

Perithous scurra was included in a paper about the way some ichneumons locate their larval hosts by tapping the substrate with their antennae and assessing the quality of the sound that bounces back in order to locate a larva within (it’s essentially echolocation in wood). It’s an uncommon ability, and one that comes in handy when the insect you’re looking for is in a tunnel. Alternately, members of this subfamily (Pimplinae) find potential hosts via sight, odors of the host bug, or odors of the host bug’s host plant. In the case of Perithous scurra, after Mom stings the host larva (as one article so delicately put it, “inactivating it,” she lays an egg in it. The larva feeds within and eventually pupates in the cell designed for its host. Adults feed on nectar and honeydew.

The BugLady photographed a male – here’s the female with her long ovipositor. And here she is ovipositing.

And that, unless we want to dive deep into a detailed description of the final instar larva or a phylogenetic analysis of its chromosomes, is all the BugLady could find about Perithous scurra. 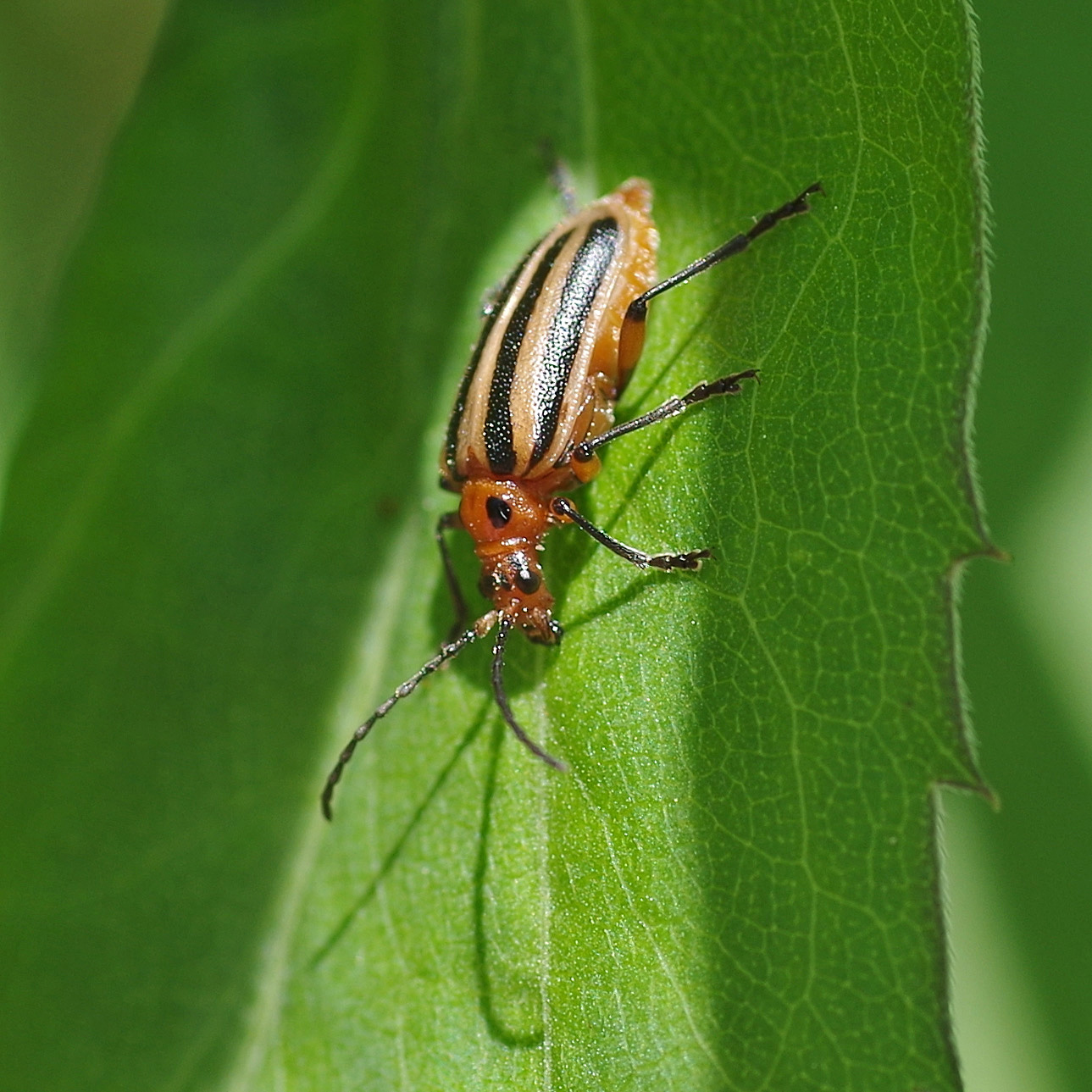 The BugLady was way off-base with her original identification of this beetle and had to call in an expert. Instead of being a Pyrota blister beetle that doesn’t occur around here anyway, it’s a long-horned beetle named Brachysomida bivittata in the family Cerambycidae (thanks, Dan – as they say, any mistakes from here on belong to the BugLady).

There are a lot of Cerambycids, too – around 30,000 worldwide, with about 360 of those in the subfamily Lepturinae, the Flower Longhorns. The Flower Longhorns are often-colorful, often-slender, often “broad-shouldered,” diurnal beetles, usually seen feeding and/or cavorting on flower tops. Many Cerambycids, including members of Lepturinae, can make little squeaks by rubbing together the edges of the first two segments of the thorax.

Brachysomida bivittata was once called Brachysomida varians, and bugguide.net describes it as “highly variable in punctuation [the little pits on the elytra] & color (all-orange to all-black)” Check out the below images for more.
Image 1
Image 2
Image 3
Image 4
Image 5

According to Evans, in Beetles of Eastern North America, Brachysomida bivittata larvae bore into and feed on oak, hickory, and dogwood (mostly in dead or dying woody tissue), and the adults are found on dogwood, viburnum, sweet clover, and anemone flowers (they apparently like yellow or white). A good meal allows the eggs to mature and facilitates oviposition.

For all your scrabble needs, the internet delivers a website that gives us great lists of words that “match the pattern “tata.” Like digitata, tridentata, cantata, etc.

Last (and least) – is OLETHREUTES ATRODENTATA (hopefully) a small moth with some big names. According to bugguide.net, its genus name, Olethreutes, comes from the Greek word “’olethreuonta,’ meaning ‘destroyer, annihilator,’ a term used to describe the devil in Greek biblical texts,” its species name means “dark-toothed” and refers to its markings, and several obscure sources called it the Astronomer moth. No idea. 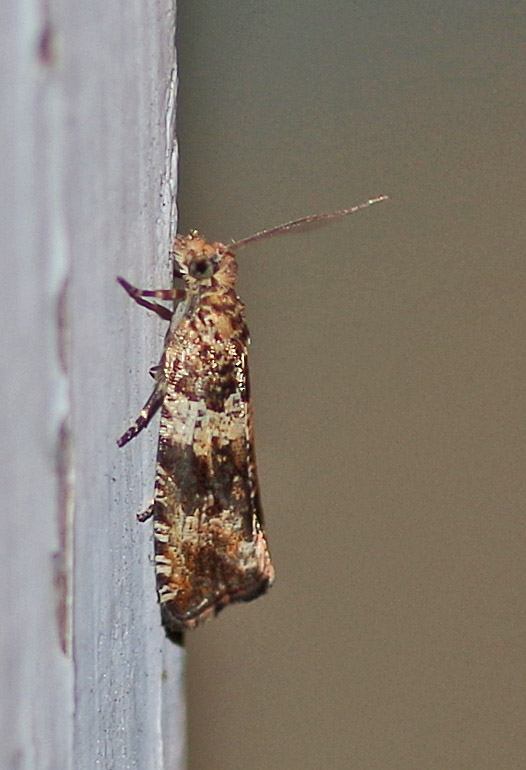 It’s in the family Tortricidae, often called the leaf-roller moths because of the way caterpillars roll up and tie a leaf so they can feed inside (though some feed in roots). Some are generalist feeders, and others, like the members of this genus, specialize. Tortricidae is another big group, containing more than 10,000 species worldwide, but micro-lepidopterists suspect that there are lots of un-named species lurking in the tropical vegetation. Many family members are agricultural/silvicultural pests.

Olethreutes atrodentana adults are small, cryptically-colored, and nocturnal. The caterpillars are found within rolled-up leaves of oaks.

Time to shovel some snow.