Today we feature three bugs about whom not too much information is circulating, other than their presence in museum collections and on state/regional biodiversity lists. If they have anything in common, it’s that all three are odd little insects.

The soft-bodied, aquatic larvae of caddisflies famously make beautifully-engineered portable homes from vegetable or mineral materials that they find (and glue together) underwater, or they spin webs/nets that attach them to rocks in running water. The moth-like adults can be found nectaring on flowers, perched on vegetation, or coming to the BugLady’s porch light, far from water. This caddisfly is in the family Leptoceridae, the Long-Horned Caddisflies/Long-horned sedges/Long-horned case-makers (leptos is Greek for thin or narrow, and keras means a horn), and they’re probably in the genus Oecetis. Long-horned, it turns out, refers not to the bizarre, furry appendages sticking out in front of the insect’s face like an extra pair of legs (those are maxillary palps) but to the antennae, which, in the Leptoceridae, are considerably longer than the insect’s body (the far-away shot shows the full length of the antennae). Maxillary palps are structures that branch off of the paired maxilla (half of the mandible-maxilla mouthpart team), and they often have a sensory function. 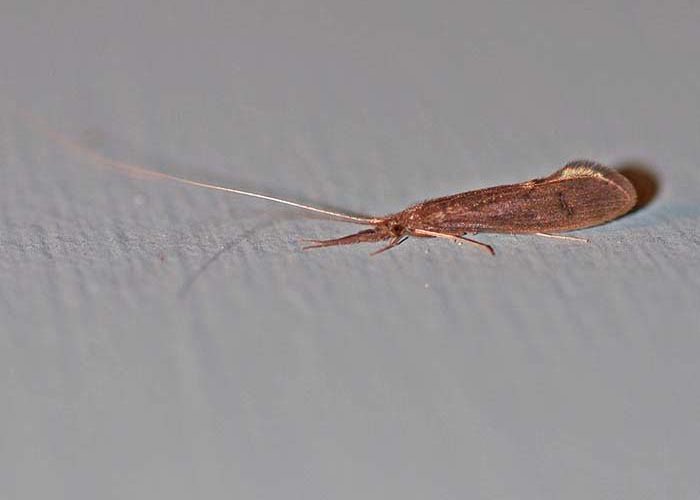 Oecetis larvae begin life in a mass of jelly-covered eggs deposited on underwater plants or stones, and they are bottom-dwelling predators in still-to-very-slowly-moving waters. 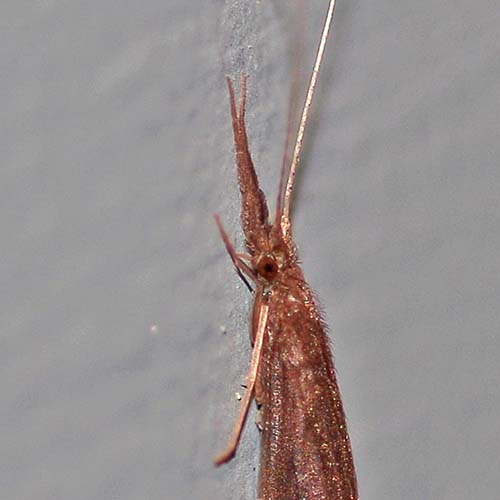 For more information about caddisflies and to find out the origin of the caddisfly’s name, check in the “Bug of the Week: Caddisfly” entry. To view a strange application of the caddisfly larva’s industry, Google “caddisfly case jewelry” and see what happens when larvae are provided with gemstones for their case-making. Art imitating life.

OK, the BugLady has met a lot of caterpillars, but she’s never met one with the corduroy-like texture of this Large Lace Border Moth caterpillar (probably). There are six species in the genus east of the Great Plains, and identification of caterpillars can be iffy, but the BugLady is always (a little too) comfortable out on a limb. Sogaard, in Moths and Caterpillars of the North Woods describes the texture as “many fine annular rings;” “as many as 30 annulations on some abdominal segments” says Wagner in Caterpillars of Eastern North America.

The Large Lace Border (Scopula limboundata) is a member of the moth family Geometridae (the inch-worms or earth measurers) whose caterpillars’ gait illustrates their name. The absence of several pairs of prolegs in their mid-section causes them to have what the BugLady’s mother called “a hitch in their get-along;” instead of undulating across the landscape, they grip with the back legs and stretch out the front, then pull the rear legs forward. Repeat. Geometrid caterpillars are twig-mimics, camouflaging themselves by grabbing the substrate with their back feet and stretching out rigidly. Large Lace border moths are quite variable.

Scopula is a huge genus with more than 800 species worldwide. Sogaard also tells us that Asian members of the genus “visit vertebrate eyes, feeding on tears and mucous, perhaps for sodium or protein. (Wagner adds that moths feed on blood and sweat). At least 30 species of eye-frequenting moths are suspects in the transmission of diseases that affect humans, and others that affect livestock,” (and the BugLady wishes she didn’t have that picture in her head now).

The Large lace border is found in woodlands, wetlands, and edges, where the caterpillars feed on the leaves of shrubs, trees, and herbs including black cherry, apple, blueberry, elm, cinquefoil, bedstraw, dandelion, and clover. They overwinter as partially-grown caterpillars.

The BugLady found this Sumatrosis inequalis (no common name) beetle in the woods at the Ozaukee Washington Land Trust’s Huiras Lake property (well worth a visit; read more about it on the Ozaukee Washington Land Trust’s) website. She was attracted by the beetle’s odd posture and wondered if maybe it was a victim of one of those parasites that get into an insect’s brain and cause it to climb high and act weird. But when she looked at the collection of Sumatrosis pictures on bugguide.net, she noticed that at least a quarter of the pictures show tilted beetles. One contributor even commented on it: “Every single time I’ve seen these things, it looks like they’re bowing. Sumitrosis inaequalis? What’s the point of the kneel?” The response was “It’s not bowing down to you…it’s mooning you! :).” Science is so classy. (and no—the BugLady did not find an alternate explanation for it).

The tiny (4 mm, plus-or-minus) Sumitrosis inaequalis is in the Leaf beetle family Chrysomelidae, a huge family of varied and often-colorful beetles. Chrysomelids eat plants, both as adults and larvae (larvae may bore in roots or mine leaves), and many species are linked with only one or a few plant species. There are four species of Sumitrosis in North America; Sumitrosis inaequalis is found from coast to coast and from Canada to Mexico, but it’s uncommon in the far West. Most sources agree that larvae mine the leaves of various species of the Aster family (the outliers say members of the Nettle and/or Pea families), and adults are found on leaves of a variety of herbaceous and woody plants. The BugLady loves its little white spats.