Time to celebrate three more unsung bugs—bugs about whom little is written and whose internet presence is mostly limited to species/collection/biodiversity lists, and to whom we will give their 15 minutes of fame. Remember—there are more than 100,000 species of insects on this continent north of the Rio Grande, many that are difficult to distinguish from their close relatives and that are lacking both common names and biographies.

The pretty, little (about 1/3 inch) Black Onion Fly (Tritoxa flexa) is mentioned as a competitor for our onion (and possibly garlic) crops in American agricultural writings as early as 1830. Since the BugLady photographed it out on the prairie, she wonders if it targets nodding onion as well. The BOF’s base of operations was historically listed as the central Midwestern states, but the present range of this native fly stretches from Iowa/Minnesota to New England and to the near South. 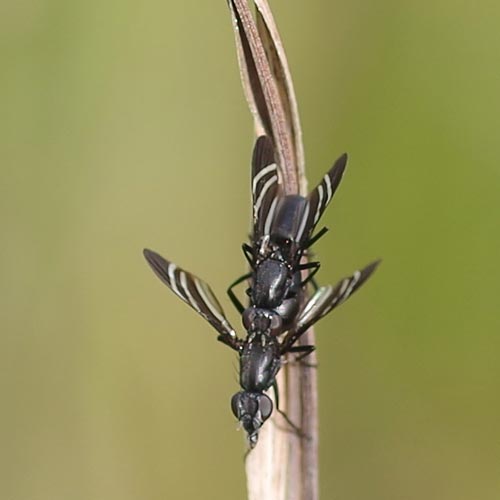 It belongs to the Picture-winged fly family Ulididae; family members use those classy wings like semaphore flags during courtship. The larvae of most Ulidids feed on decaying organic material, but some, like the BOF, feed on roots. The BOF (not surprisingly) lives in onion roots and will continue to feed after the onions are harvested. This species is called a “common agricultural pest” and an “enemy to onions” in older sources and, more recently, “an occasional pest,” but there is no outcry from the usual agricultural and gardening sites for its extermination. The 1912 Yearbook of Agriculture advises that “When the insects are found attacking stored onions, bisulfid of carbon can be used as a fumigant” (A 1916 Bulletin of the University of Illinois (Urbana-Champaign) Extension Service describes carbon bisulfid as “a nearly colorless, ill-smelling liquid that changes to a gas very rapidly when exposed to the air at ordinary temperatures,” and goes on to say that “This gas when mixed with air is very explosive.”).

The lovely beetle is Leptura subhamata (no common name), a long-horned beetle (“horn” = antenna) in the family Cerambycidae. There are lots of long-horned beetles—more than 1,200 in North America alone (30,000-plus in the world, all told); this beetle is in the Flower Longhorn subfamily Lepturinae, a bunch of (usually) slender, wedge-shaped beetles with broad “shoulders” and tapering elytra. 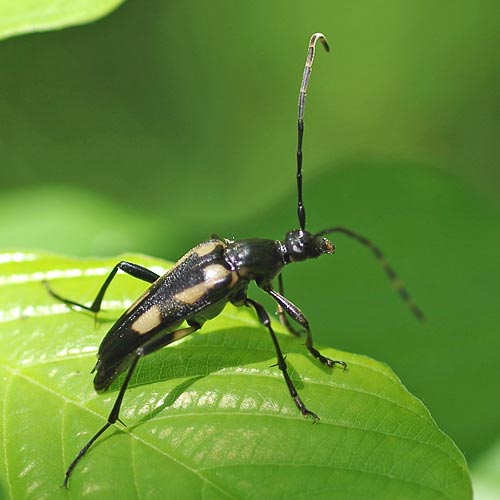 Leptura subhamata can be found from Minnesota to Nova Scotia to the Carolinas, where the larvae tunnel into the wood of decaying pine and hemlock while their elders feed on flowers. And that’s it! Unless you include the hit from the Zipcode Zoo site reminding us that Leptura subhamata is on their list of “Animals with Scientific Names beginning with the letter ‘L.’”

This very hungry caterpillar—a Hitched Arches (Melanchra adjuncta)—had made great inroads on its Oxeye flower meal when it was photographed, but neither it nor the flower could be found when the BugLady checked the next day. HA caterpillars are catholic feeders, enjoying a variety of woody and herbaceous plants from asters to willows. The caterpillars can be green or brown, and the well camouflaged, licheny-looking adults are variable in shade, too. Sogaard, in Moths and Caterpillars of the North Woods, dubs the caterpillars “showy” and wonders if they are “chemically defended”. Maybe so. Wagner, et al. in Owlet Caterpillars of Eastern North America, points out that the list of larval food plants includes many that are toxic to other generalist feeders. 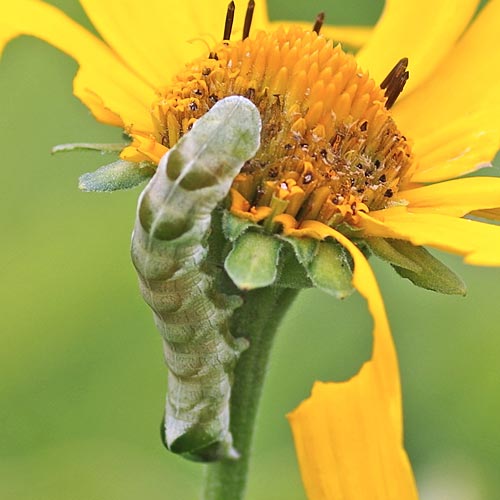 HAs are found across the continent from southern Canada, south, except for the southernmost tier of states. They like open spaces and edges (ecologically speaking, the term “edge” refers to a place where one plant community meets the one next door to it). They are in the Owlet moth family Noctuidae.

Entomological benchmark—the BugLady figures that we’re about halfway between the last mosquito sighting of 2014 and the first sighting of 2015. Enjoy.