“Bugs without Bios” are critters that, while undoubtedly worthy, are barely on the radar in either on-line or print references. But, they contribute to their communities and have their own places in the Web of Life. What these three have in common is their (admittedly very limited) work as biological control agents.

The BugLady encountered this beautiful little (about 3/8” long) Grape Trunk Borer (Clytoleptus albofasciatus) when she was photographing Phantom Crane flies this summer (albofasciatus means marked with white bands). It’s in the very-decorative Long-horned beetle family Cerambycidae, and it’s a monotypic genus—this is the only species in the genus.

GTB larvae feed within dead and dying grape vines, and the BugLady wishes there were more dying grape vines for it to feed on. Conventional wisdom has always told us that Wisconsin gets too cold in the winter for wild grapes to go crazy, but today’s landscape is dotted with small trees and shrubs that are covered by grape vines. Grape leaves form an umbrella that effectively blocks the sun from their support tree, killing it. Wild grape does have many fans in the wildlife community, though.

Caveat: This looks like a wasp in the Scolid wasp family Scoliidae, a group that is under review and that is tricky to ID from photos. The BugLady is going to go out on a limb here (not for the first time) and call this Campsomeris plumipes (no common name); members of the genus Campsomeris are often called Scarab hunter wasps. 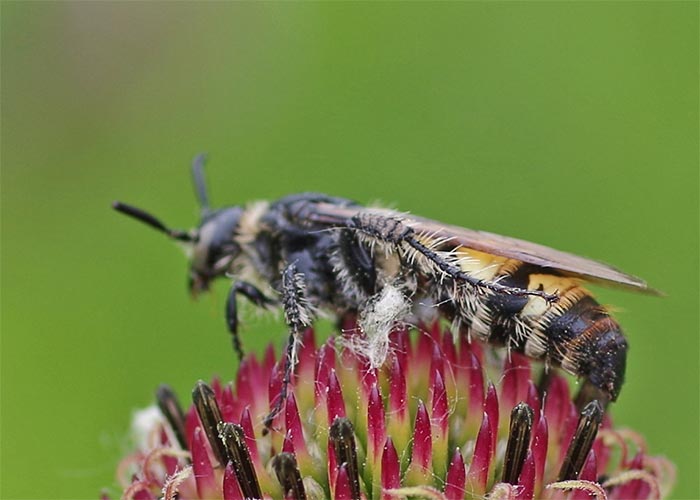 The BugLady really does try to get both ends of her quarry in focus when she photographs them, but a really spiffy moth flew past as she was lining up this shot, and after she got the moth, the shaggy wasp was gone.

CPs are found throughout the eastern U.S. Females tunnel in loose/sandy soil in order to find a beetle grub to lay an egg on (she flies low over the ground in a search pattern, circling back if she “smells” something). She digs down, temporarily immobilizes the grub by stinging it, and oviposits on it. Her offspring are parasitoids that eat slowly, killing their food source by inches. By the time the stunned grub is able to locomote again, the wasp larva has hatched and climbed aboard, and there it stays aboard as the grub continues to feed below ground. One of the beetle grubs she targets is the Japanese beetle.

Males dig, too, using both their front legs and their mouthparts to excavate. He may dig down and cover himself up in order to hide at night or to shelter from rainstorms. Adults sip nectar from a variety of flowers.

The BugLady is always tickled to see some of the automatic responses that pop up when she’s researching obscure bugs—like “Obscure bug” sting (whether they do, or not) and “Obscure bug” seriochemicals (in case you want to bait a trip for them) and Best art of “Obscure bug,” (although in this case, there actually was a nice greeting card with a Campsomeris on a flower), and one ubiquitous Garden site that promises to deliver detailed natural history information on just about every species (but doesn’t).

They are one of her new, favorite caterpillars, but there aren’t enough of them. Why? The caterpillars are generalist feeders, enjoying willows, poplars, smartweeds, and sedges. And cattails and grasses, including Narrow-leaved cattail and Reed Canary Grass, which seriously need eating.

HMMs, which are Owlet moths in the family Noctuidae, are found across North America, usually at wetland edges, from late spring through summer. There are several broods, and the final cohort of the year overwinters as pupae. Wagner, in Caterpillars of Eastern North America, quotes from a 1954 account of HMM cocooning behavior, “’The cocoon is made in a distinctive way when a broad grass or sedge blade is available; the blade is sharply folded down near the middle, then after about an inch, is sharply folded up again, enclosing a rounded triangular area in which the fairly strong cocoon is spun.’”