The BugLady dedicates Bugs without Bios episodes to insects about whom, despite all the words that are floating around out there, she can discover only a little information.

The first Philodromid spider the BugLady ever noticed was securing her eggs to a grass leaf. Philodromids, also called Running Crab Spiders, are a hardy bunch of true spiders in the family Philodromidae (but they are not true crab spiders, which are in the family Thomisidae). Bugguide.net tells us that “Philodromid” comes from the Greek philodromos, meaning lover of the race or the course, but the spider-race connection is unclear to the BugLady. This particular Philodromid is in the genus Tibellus (the Slender Crab Spiders), and may just be the Oblong Running Crab Spider Tibellus oblongus. Whew! 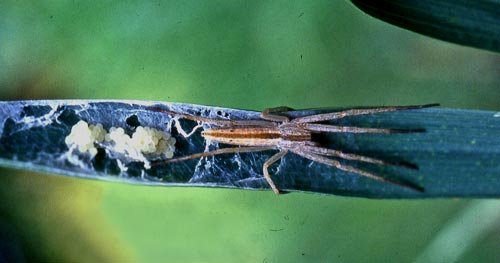 Philodromids at a Glance? Each leg ends with two claws, all the legs are pretty long, but the second pair of legs is longer than the first. Plus some technical stuff. Their bodies are less than a half-inch, and the leg-span is up to an inch. Tibellus has a long body, and the seven species of Tibellus in North America can be tough to ID from pictures alone, and there may be two species here. 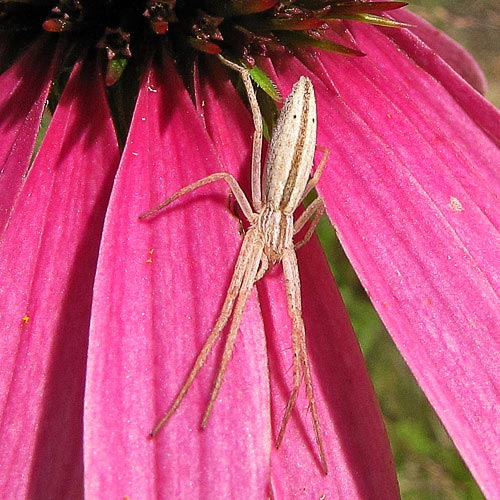 The eggs that she conceals in her leaf of grass hatch toward the end of summer, and the spiderlings will overwinter. They mature when the eating season resumes in spring. Philodromids are carnivores that lurk in vegetation and ambush their prey; they spin silk for their egg sacs and for the draglines that save them from falling, but they do not make webs for hunting. Speaking of hardy, Larry Weber, author of Spiders of the North Woods, reports seeing adult Philodromids trekking around on the surface of the snow “early in the season.” The BugLady wonders if they were stalking springtails that gambol on the punky March snow.

Someday the BugLady, who is severely “Keyword Challenged,” is going to stitch a Sampler that says “There were no results for your search.” Even so, it’s not often that she gets skunked to the degree that this pretty, little, black and red plant bug (in the genus Prepops, family Miridae) has skunked her. This guy/gal truly flies under the radar. Apparently, it doesn’t skewer us or come inside for the winter, or eat our edibles (one species has been seen on Muscadine grapes in Florida, but so little is known about Prepops that we’re not sure what it’s doing/eating there). It seems the very soul of discretion. 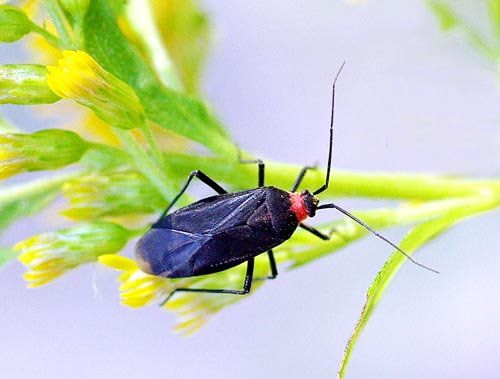 Which Prepops is it? As the sites say, “This genus is in need of revision.” There are about 20 species in North America, mostly in sunny woodlands and grassland edges east of the Great Plains, and this is probably Prepops rubellicollis/borealis/confluens.

The BugLady’s experienced another stroke of Serendipity—while looking through bugguide.net’s immense collection of leaf beetle pictures for a couple of X-beetles, she accidently discovered the identity of a suspicious brown blob that she photographed last year. Turns out, it’s the larva of a leaf beetle (family Chrysomelidae) in the subfamily Cryptocephalinae, the case-bearing leaf beetles. Classical language enthusiasts will note that the Greek kephalon means head, and crypto means hidden, and not by coincidence, the members of this subfamily have heads that are recessed almost up to their eyes in the first segment of the thorax. The Lord Leaf Beetle (Coleothorpa dominica) and Clay Colored Leaf Beetle (Anomoea laticlava), of previous BOTW fame, are in the case-bearing leaf beetle bunch. There are more than 300 species of Cryptocephalinae in North America, and beyond its subfamily, the BugLady has no idea who this one is. 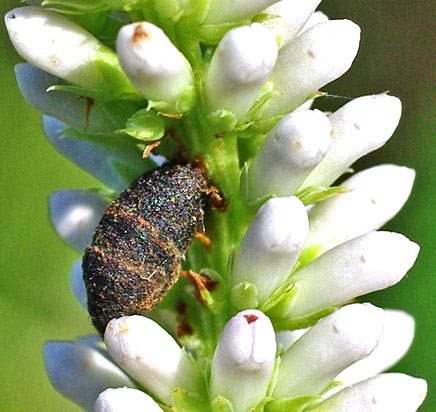 About those cases that they bear. When Mom lays her eggs, she smears a layer of fecal matter over them, creating a “fecal encrustation” (the BugLady read a fun British paper about Cryptocephalines that kept referring, classily, to “faeces”). When a larva hatches, it incorporates its egg into a protective case that it “grows,” using its own frass (bug poop) and maybe some tiny plant hairs, soil, or debris glued together by various bodily fluids. The surface of the case may be textured or patterned. With its abdomen tucked safely inside the case; it moves about and feeds by extending its head and legs out of the case like a terrestrial caddisfly. 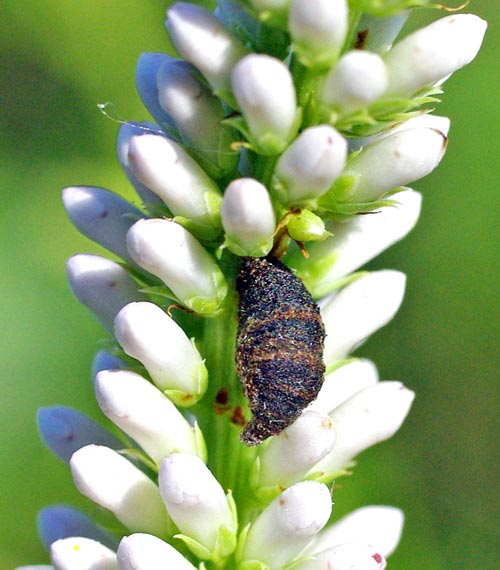 A larva lengthens its case by adding material along the open edge; it widens the case by slitting it longitudinally and, while keeping the split edges apart, filling in the resulting gap with new mortar. The cases never grow quite enough, though, they remain too small for their inhabitants, whose abdomens are folded up inside. When it’s time to pupate, the larva seals itself in by covering the open end. It’s a complicated and energy-intensive behavior, and the theory is that the case conceals larva from predators, and renders it less appetizing to predators if it is discovered.

A picture of a larva is at Case Bearing Leaf Beetle Larva. Despite the bizarre larval disguise, adult Cryptocephalines look like “normal” beetles (except for the warty leaf beetle).

Most Cryptocephaline larvae feed on detritus on the ground, but some like leaves and are very host-specific. The larvae stay on their natal plant (unless they are spooked and drop off).