Spring housecleaning—time to tidy up a few more insects whose biographies are short ones.

With its wings closed, this little Red Twin-Spot Moth (wingspread just under an inch) looks butterfly-ish (the BugLady was pretty excited about seeing a butterfly on the porch at 10:15 PM). The RTSM (Xanthorhoe ferrugata) is in the moth family Geometridae, whose caterpillars are the famed “earth measurers,” or inchworms, in a group called the “carpets.” They range over two-thirds of North America—Alaska to Newfoundland to California to northern Georgia. They like the suburbs, because their caterpillars feed on plants that grow in (untreated) lawns (like the BugLady’s) chickweed, gill-over-the-ground, thistle, and an assortment of Polygonums (buckwheat/knotweed/smartweed).

RTSMs also occur across northern Europe and Asia. According to bugguide.net, “In Europe, this species is called Dark-barred Twin-Spot, and a different species (X. spadicearia) is called Red Twin-Spot. How’s that for confusion?” As the Bard once said, “What’s in a name? That which we call a rose by any other name would smell as sweet.”

The BugLady photographed this sweet little Geron Calvus fly (no common name) on Black-eyed Susan, but she never suspected that it was a bee fly (another accidental ID). Bee flies have graced these pages several times before. This fly (Geron calvus, probably) is in the Bee fly family Bombyliidae, and in the subfamily Toxophorinae, the Slender bee flies. There are maybe 40 species in North America and 400 worldwide; their bodies are covered by short hairs, and they have a long proboscis (they don’t sting).

How do they make a living? Geron larvae are parasites on the larvae of a number of families of small moths, including this one http://bugguide.net/node/view/480786/bgimage. Their larvae are usually “hypermetamorphic,” that is, they are exceptionally active in their first stage (called triungulins), and they find and hop aboard their eventual hosts (or their host’s mother, riding her back to her young) before settling down to a normal regime. Adults use that long proboscis to sip liquids from flowers (they tend to like yellow composites).

And then there’s Hyperplatys maculata (also no common name), a pretty beetle in the Long-horned beetle family Cerambycidae. It was just passing through when the BugLady saw it—it stuck around for one quick shot.

HP is in the subfamily Lamiinae, the “Flat-faced longhorns” (so-named for the vertical orientation of their faces. It’s a small genus (11 species worldwide) in a large subfamily (about 20,000 species). Like those of other Cerambycids, the larvae of HPs feed on dead wood. They’ve attracted the attention of foresters because they eat fungal strands within dead branches of a variety of trees and can spread spores of the butternut canker fungus. 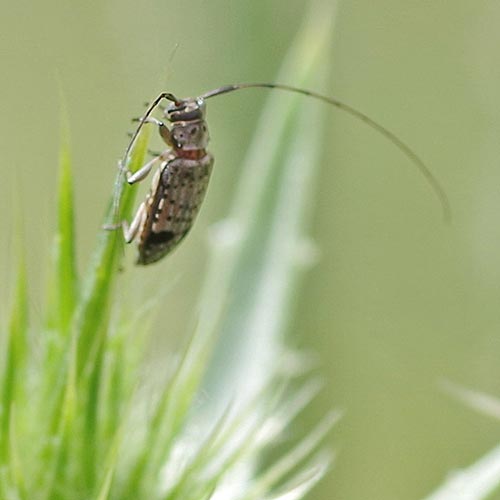 The HP’s full name is Hyperplatys maculata (Haldeman, 1847). The BugLady wondered who Haldeman was (well, now he’s Number six in the occasional Who were those Guys? Series). After digesting the various articles about him, she came away with three impressions:

Samuel Steman Haldeman (1812-1880) was born in Lancaster County, Pennsylvania, and was entranced with nature from an early age, wandering the countryside, collecting natural history specimens, and wading in the Susquehanna. He dropped out of college at the age of eighteen, after two years, saying, “I cannot learn from others, I must see for myself.” According to a publication of the Haldeman Mansion Preservation Society, “Thereafter he educated himself by attending lectures, recording observations of bird habits, learning to stuff birds and mammals from a traveling Methodist minister, resulting in a large collection of specimens in natural history.” (Haldeman Mansion Preservation Society). In the course of his life, he not only studied biology, zoology, geology, chemistry, paleontology, entomology, malacology (molluscs) and conchology (mollusc shells) (for a long time, molluscs were included under the topic of Insecta), and he lectured and wrote about many of these, too.

Haldeman loved his work and often put in 16-hour days. At one time or another, he managed the family sawmill; worked on the geological survey in New Jersey and Pennsylvania; taught at colleges in Pennsylvania, Delaware, and New Jersey; wrote for regional newspapers; designed the “stately home” that his father built and designed its landscape of mostly native plantings; published more than 150 articles on natural history topics; managed a bank; was a silent partner with his brothers in the family iron-smelting business and later perfected a method for using anthracite coal in smelting ovens (and published on that, too). He was an early proponent of standardized spelling, corresponded with Noah Webster, and contributed to Webster’s dictionary. He was a generous supporter of fledgling scientists, and he influenced some of the top thinkers of his day.

Biographical sketches often refer to him as a naturalist and a philologist (one who studies the structure and development of language). Haldeman had an extremely sensitive ear, and in later life he was prominent in the fields of etymology (word derivations), orthography (spelling), and philology (he studied the dialects of American Indians, among other groups).

In the mid-1840’s, he wrote and presented a paper for the brand-new American Association for the Advancement of Science on the species and distribution of freshwater molluscs of America and Europe. Fifteen years later, that paper caught the attention of a British scientist by the name of Charles Darwin, who wrote “In 1843-44 professor Haldeman (Boston Journal of Natural History, United States, Vol. IV, pg. 468) has ably given the arguments for and against the hypothesis of the development and modification of species: he seems to lean towards the side of change.” Haldeman and Darwin maintained a correspondence (according to one source, Haldeman was the only American scientist Darwin regularly corresponded with) and Haldeman is cited in Darwin’s Origin of the Species.

He was considered a progressive thinker who was at the cutting edge of every subject that he applied himself to. In short, he’s the most accomplished scientist you never heard of.

See Memoir of Samuel Stedman Haldeman, 1812-1880 (PDF) for a flowery memoir by J. P. Lesley—“Here he peacefully lived and worked, and here he peacefully died, alone, in the night, on the 10th of September, 1880, without sickness or suffering, as every man of science should die.” They just don’t write ‘em like that anymore.

And Now For Something a Little Different