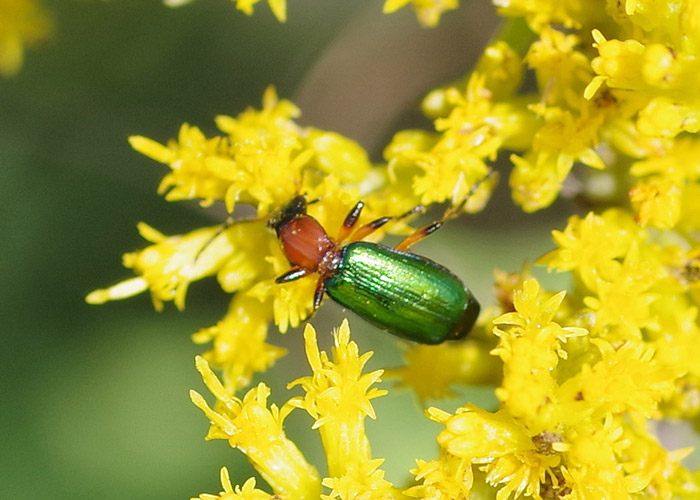 Bugs without Bios celebrates the small-but-mighty insects that, mostly unsung, sneak below our radar daily. Today’s catch have three things in common – their identifications are all “probable;” they’re all carnivores; and on each of the three, the BugLady’s Google search ran out in fewer than ten pages.

This metallic beetle is Calleida punctata (probably – there’s a very similar species that’s more southerly in range and we are north of the overlap zone). No common name. It’s a tiny beetle in a large family, Carabidae – the Ground beetles – that includes some rather substantial species, like the 1 ¼” Fiery Searcher, Green Beetle, and Caterpillar Hunter. There are about 34,000 species of Ground beetles worldwide; about 2,500 in North America. While there are a few herbivores and omnivores in the crowd, and some larvae that are herbivores or parasitoids, most species are predators. Here’s a better shot of one. 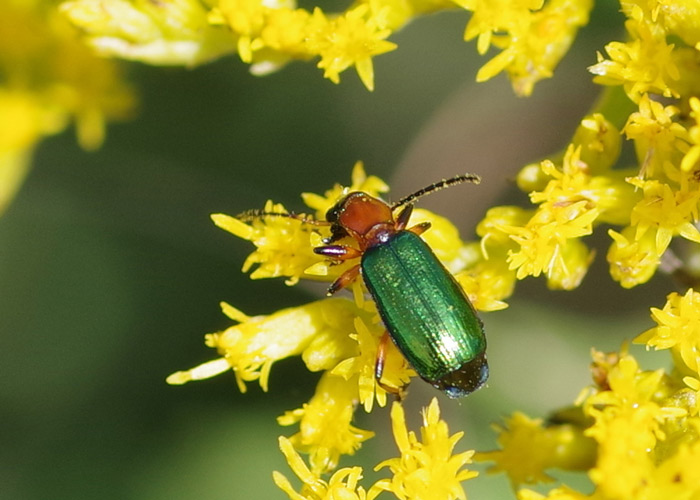 Calleida punctata (Calleida means “beautiful form”) is about 1/3 inch long (for scale, here’s one on a single milkweed flower). It’s found in the northeastern quadrant of North America from Quebec to South Carolina to Kansas to Manitoba (though they were listed in Panama and in a paper about insects found on a college campus in Pakistan, too. Our North American fauna includes 64 non-native carabids, and that door opens both ways).

As their name suggests, ground beetles are often found on the ground, where they’re harder to spot, but members of this genus also tend to be more arboreal and are seen on leaves and flowers (OK, they’re sometimes “planticolous,” from the Latin “colous” meaning to inhabit, live in/on, dwell, etc.). The Illinois Wildflowers website associates them with goldenrods. Their prey is small insects, including beetles, and in a paper about the first Minnesota record of the beetle in 2000, author Paul Tinerella noted that the adults are said to eat caterpillars. 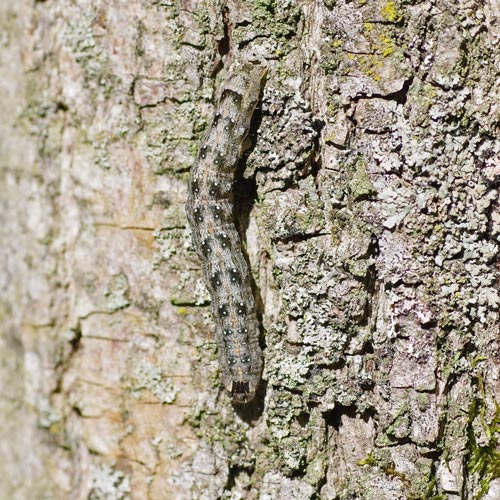 First off, the name. Please do not ask the BugLady where these moths in the Owlet family (Noctuidae) and the Cutworm/Dart subfamily (Noctuinae) and the genus Lithophane got the name Pinion moths. Pinion pine? Pinion feathers? Rack and pinion? Don’t know. But – the BugLady has long said that the people who name moths (and tiger beetles) seem to love their work. For proof, check the names of tiger beetles and of underwing moths. Along with common names that describe their colors and patterns and discoverers, there are Nameless, Immigrant, Wanton, Shivering (they shiver before flight on cool days to warm the muscles in their thorax), Singed, Luke-warm, Dowdy, and Anti-pinions.

Adult pinions tend to be drab, with a noticeably “square-shouldered” look, and because of their phenology, many of them are loosely called “winter moths.” Overall, they are northern moths, associated with woodlands and edges. Pinions are active late in fall, but they overwinter as adults and then fly, mate, and lay eggs early in the next spring. Pinion larvae eat the leaves of woody plants; some are generalists and some are host-specific – and some supplement their diet of plants with a caterpillar or two, even those of their own species (and isn’t this a dynamite picture).

The caterpillar on the tree trunk is (probably) a Branded/Dimorphic Pinion (Lithophane patefacta) (“Litho” means “stone” and “phane” means “looks like”). It’s found in eastern Canada, south to the Carolinas and west to Wisconsin, and there are some records for British Columbia, Louisiana, and maybe northern Florida. Wagner, in Caterpillars of Eastern North America calls the Branded pinion “perhaps the most widespread and abundant pinion in the Southeast.” Adults come in light or dark forms – northern moths are commonly lighter than the darker, southern forms. Caterpillars come in different colors, too:

Wagner speculates that the darker, southern morphs of caterpillars may be more cannibalistic than the paler forms. Caterpillars especially like sugar maple, but they also feed on cherry, oak, and hickory. And other caterpillars. 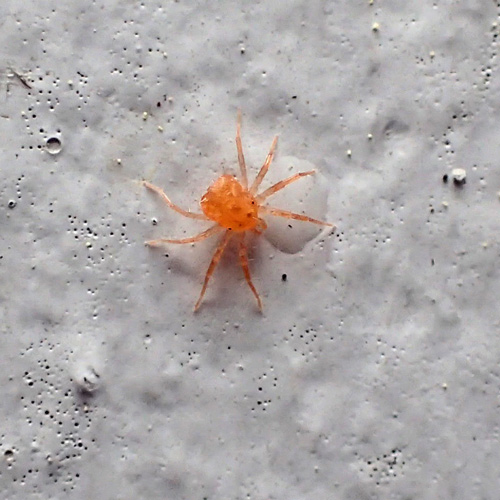 As seasoned BugFans know, the BugLady is attracted to easily-overlooked critters. When she saw these 1/16th-to-1/8th of an inch mites on her porch rail (near her geraniums) last summer, she wondered if they might be the notorious, plant-eating spider mites, but she thinks they were “whirligig mites” in the genus Anystis. It’s in the huge mite order Trombidiformes (26,000 species worldwide) and in the family Anystidae, the whirligig mites. For better pictures, check these out.

As commenter “theridula” says, in helping to ID a mite on the Project Noah website, “Mite identification is not easy and frustration is inevitable.” Amen. Whirligig? These are pretty peppy mites. Theridula continues “you said the mite was “quite fast”, automatically dismissing nearly all spider mites (Tetranychidae) which you should think of as slow cows browsing on plant material. ‘Quite fast’ should make you start thinking predator. After all, you need to be fast to chase down prey.

“Then you come to the nearly triangular body, truncated at the posterior, combined with strong latigrade legs that seem to radiate from a central point. Throw in the fast erratic running behavior and that it was found off of the ground and you have excellent diagnostic characters for the genus Anystis (whirligig mites).” The arrangement of their legs also allows them to pivot “on a dime,” which adds to their whirligig-ness (the BugLady wonders how many could sit on a dime). 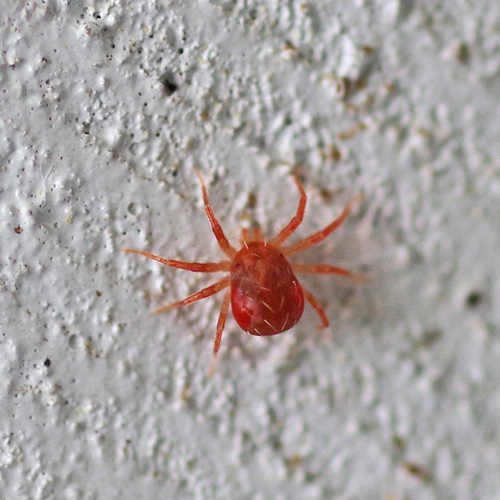 Anystis is a tiny carnivore that preys on small invertebrates, including harmful species of mites (scroll down to the fourth page for a shot of Anystis baccarum and prey), and most of the Anystis hits on the internet have to do with its diet. Various species, especially A. agilis, which eats an average of 39 aphids daily in vineyards and also likes grape leafhoppers, and the cosmopolitan A. baccarum, which preys on pests of orchards and tea plants, are effective biological controls of problem species. It would behoove fruit growers to recognize these helpful little critters so that they don’t throw out the baby with the bathwater. Not a “chewer,” a mite punctures its prey and sucks out the juices.

Anystis baccarum (and, the BugLady assumes, other genus members, but she could not confirm it) reproduces by parthenogenesis. Females produce only females; there are no males in the population. Eggs are laid under tree bark or in the surrounding soil, and newly-hatched mites travel up the trunk looking for food. They take a month to mature and don’t live long as adults.

If you check redbubble, you might (mite) find an Anaystis baccarum greeting card.