The BugLady has many pictures of bugs about whom she can’t find enough information to write a complete biography. Here are three more of them.

There are a gazillion different species of moths out there (well, more than 10,000 species in North America, anyway), and some of the BugLady’s favorites are the moths that are bird-poop mimics. She thinks that this one, nose-down in the cup of a Cup Plant, is the Olive-shaded Bird Dropping Moth (Ponometia candefacta, formerly Tarache candefacta), but there are a number of look-alikes in the genus. OsBDMs (also called Olive-shaded Bird Lime Moths) are in the Owlet Moth family Noctuidae and are the most widely distributed members of their genus. For a picture of an out-in-the-open OsBDM, try Bugguide. 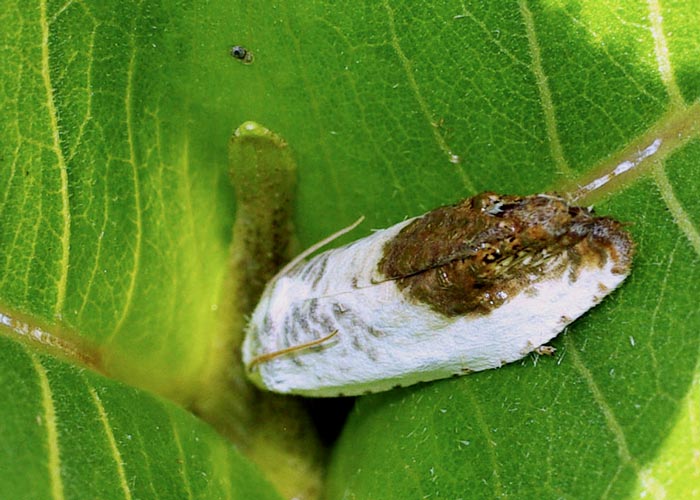 OsBDMs’ claim to fame is that their caterpillars eat ragweed and burdock. They’re being vetted as possible biological controls for those plants, which we consider noxious weeds (but burdock is an important food plant in other parts of the world and is sold in Farmers’ Markets). OsBDMs have been introduced in Russia to eat ragweed there. Here’s an OsBDM caterpillar.

Sogaard, in Moths and Caterpillars of the North Woods says that “These little moths masquerade as bird droppings to avoid becoming them.”

The BugLady spotted this lovely little (1/4” or so) Robber Fly in the prairie this summer, but it only allowed one photo before it departed. According to BugFan Mike, these small Holocephala robber flies, a.k.a Gnat Ogres, like to perch at the tips of vegetation. There they wait, watching for prey in the form of small, flying insects, including the gnats that give them their name. If they catch supper, they return to a perch to eat it. There are just three species of Holocephala in the eastern U.S., but BugLady can’t tell which one this is. 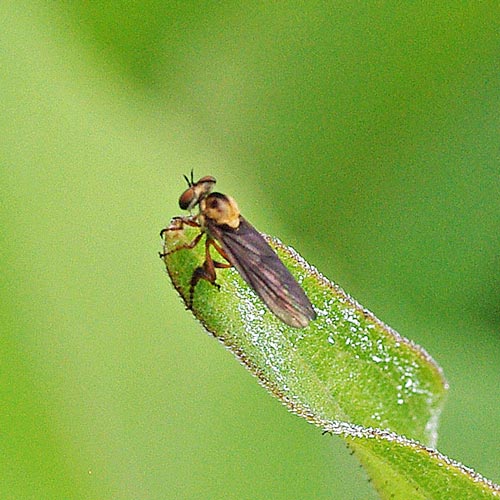 Robber flies, family Asilidae, are an interesting bunch of predatory flies that come in a variety of shapes and sizes, including some bumblebee mimics. Check Mike Reese’s great collection of Robber Fly pictures at his Wisconsin Butterfly site (Mike likes Tiger beetles, too). Robber flies have spiny legs and bearded faces, and the BugLady loves to hear the large Promachus robber flies buzzing as they fly by. Robber fly larvae are also carnivores; eggs are laid in the soil or in plants (the BugLady watched a Promachus laying eggs in the spiny cone of a purple coneflower). The young eat insects, larvae and eggs that they find in the soil or under decaying leaf litter. Bugguide.net warns us that adult robber flies may bite if handled.

If you Google “Holocephala robber flies,” more than 80 percent of the hits will be photographs. Apparently other people—people with powerful macro lenses—are far more successful at finding GOs than the BugLady is, and there are some phenomenal close-ups that show every facet of their compound eyes. A number of sites come with the warning “This site may harm your computer,” so here a safe close-up of the compound eye structure of one of these robber flies. For a better angle on the amazing back legs, try Bugguide, and no, the BugLady doesn’t know why.

The BugLady was barking up the wrong tree, looking for this leggy Bridge Spider (Larinioides sclopetarius) among the Nursery Web spiders instead of among the Orb Weavers (family Araneidae) where it belongs (Thanks, BugFan Mike). The Bridge spider (a.k.a. Gray Cross spider) is an alien spider that happily spins webs on buildings and metal structures on both sides of The Pond (it is common in Wisconsin). In a pinch, it will use tree trunks. This Northern European spider occurs spottily in Great Britain, where it was first recorded in 1894. 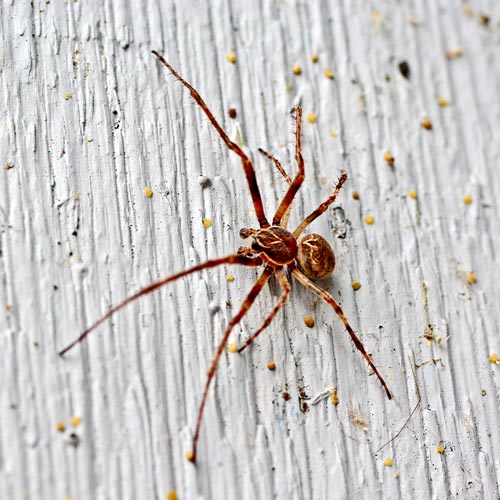 Bridge spiders take advantage of prey—masses of emerging insects like midges—that are available around bridges, near water, that are outfitted with artificial lights. They hunt at night, hanging head-down in the middle of their web. They are unusual because they are “para-social”—when prey is abundant, Bridge spiders may be found in multi-generational colonies numbering as many as 200, sometimes attaching one web to another. Mature females get the choice web sites (the original web site) (a well-fed spider is a gravid spider) while immatures are relegated to the riskier periphery of the colony and adult males don’t spin orb webs at all.

Bridge Spiders in the News: A great story in the Huffington Post tells of an incident in 1999 in which ballooning spiders, including Bridge spiders, filled the skies of downtown Chicago, causing occupants of high-rise buildings to keep their windows closed in order to keep the spiders out.