As veteran BugFans will recall, there are a multitude of bugs out there that are pretty cute but that simply don’t have much information attached to them. In fact, there are around 100,000 species of insects in North America, and a lot of them don’t even have a common name. Many can’t be told from their kissin’ cousins without a trip to the microscope for a count of the segments on their antennae or tarsi (feet) or of the hairs on their thorax. “Bugs without Bios” celebrates these “unknown” insects.

The Lizard Beetle group has been moved from the Pleasing Fungus Beetle family into the mostly-tropical Lizard beetle family Languridae, but its taxonomy continues to be scrutinized. The BugLady thinks that this beautiful beetle is (maybe) a clover stem borer (Languria mozardi), one of 7 species of lizard beetles in North America and a sometime-pest of several species of clover (its larvae tunnel in the stems). CSBs have also been recorded in soybeans, and it’s possible that the species will piggyback on soybeans as soybeans spread north. 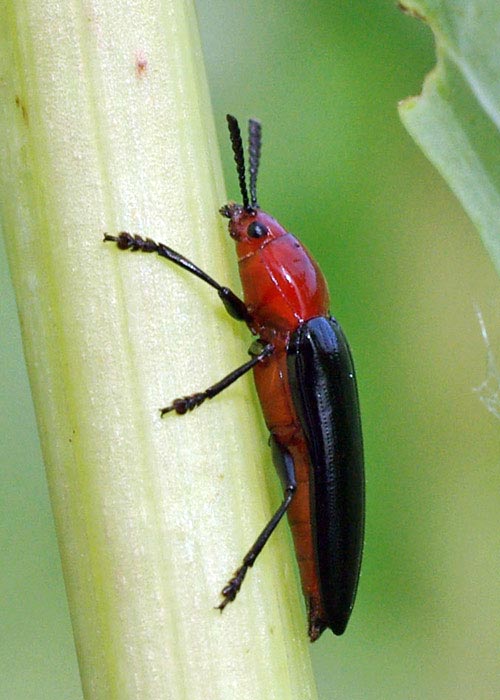 The BugLady found it on an Indian Plantain out in the prairie in early summer. Like the squirrels of her acquaintance, this spiffy half-inch lizard beetle was an expert at keeping the plant stem between itself and the BugLady’s camera.

The BugLady is always annoyed by those hokey TV ads where one (horrified) idiot says “I never thought you’d switch from ‘Whoopsies’!” and the other (smug) idiot smirks and says, “This is New, Improved ‘Whoopsies.’” At first glance, these were (yawn) just a few more Small Milkweed Bugs (SMB, Lygaeus kalmii of previous BOTW fame). Except for the fact that they were sitting on yellow prairie composites (smooth ox-eyes) instead of milkweed, and the Rorschach pattern on the back looked different. The SMB has a black heart, not a “Y” on its back.

Turns out that this is the False Milkweed Bug (Lygaeus turcicus), and it turns out that if you’re confused, the experts have been, too. Look at a collection of SMB pictures, and you’ll find the FMB mixed in, and vice versa. Because it’s been overlooked, it’s been under-studied. Some literature from the 1800’s reports that both species feed and breed on milkweed (the FMB will eat milkweed in a pinch, but it won’t thrive); other articles imply they are the same species (a researcher named James Slater was unable to convince the two species to interbreed). According to Slater, the moral of the story is “the importance of, and the need for, enthusiastic amateurs in American entomological study” (and the associated danger of trusting the literature more than you trust your eyes). FMBs are renowned in genetic studies for the tricky arrangement of their unequal-sized sex chromosomes. They are in the Seed Bug family Lygaeidae. They have been recorded on Indian plantain, too. 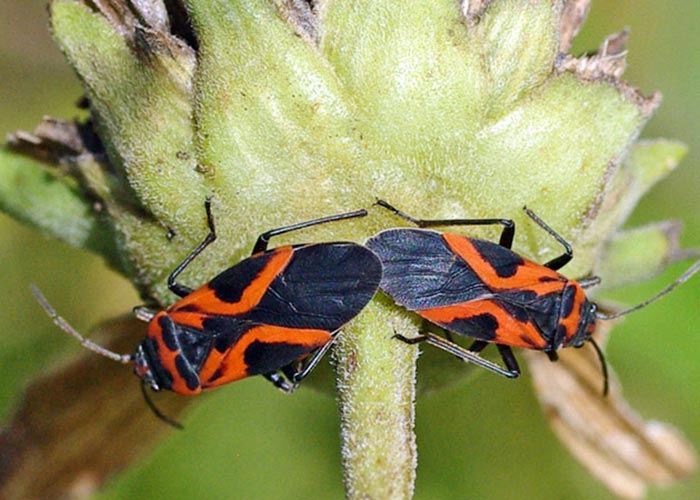 Both the species name funebris and the common name “sable” refer to its dark coloring. These little (wingspread about ¾”) guys/gals must be champions at avoiding predators, because they sure lead the BugLady and her camera a merry chase around the wild geranium patch each spring. They’re not strong flyers, so when they’re alarmed, the WSSMs simply duck under flowers and leaves. Adults seem to nectar on a variety of sun-loving, late spring/early summer flowers, but their caterpillars are fond of goldenrods, where they live on the under-surface of the basal leaves.

WSSMs are in the snout moth family Crambidae but are not as obviously “snouted” as some of the Crambiids the BugLady has seen on her porch this year. They are diurnal (day-flyers), and one sub-species or another is found in northern climes around the globe. Anania funebris glomeralis is the North American subspecies, and many people (but not the BugLady) call them by their scientific name, Anania.