Bugs Without Bios I

The BugLady has many pictures of bugs about whom she is having trouble finding much information beyond their basic taxonomy, despite the glories of her home library and all the resources on the World-wide Web. Here is a batch of “Bugs without Bios.”

Stimulopalpus japonicus has no common name that the BugLady could find (and she is mighty curious about the origins of that genus name). She calls it the Ohio bug because she photographed it (badly) on an exceedingly warm summer day on a front porch in southern Ohio. When she stepped off the end of the concrete porch slab onto the earth, about three dozen of these mini-bugs flowed quickly up onto the porch to avoid her foot. When she stepped back onto the porch, they flowed back down. An odd word to describe insect movement—“flow”—but that’s the only word the BugLady has for it. They didn’t fly; they didn’t hop, and they ran so smoothly they could have balanced tiny glasses of water on their heads. 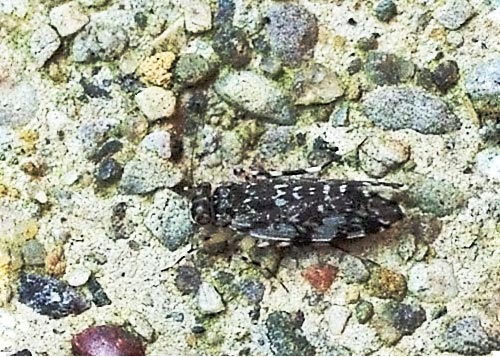 The BugLady got the ID from an on-line reference site (thanks, Eric) and then was able to ferret out the following information: Stimulopalpus japonicus is one of the tropical barklice (order Pscoptera, family Amphientomidae). Wikipedia helpfully describes the family thus: “Amphientomidae is a family of Psocoptera belonging to the suborder Troctomorpha. The presence of scales on their wings gives them a superficial resemblance to the unrelated family Lepidopsocidae (Psocoptera, Trogiomorpha) and both families can pass for microlepidoptera to the untrained eye.” Easy for them to say. Its native turf runs from India through Japan. According to bugguide.net, “It was accidentally introduced to the D.C. area during the late 1940’s and has since spread as far west as southern Illinois to northern Alabama” [1/3 of the way across the country—quite an accomplishment for so small a critter!]. “It often appears in numbers on cement structures and rocks in shaded parks during the summer. The introduced population is apparently all-female.”

So, males are unknown and females lay eggs that produce more females, through a process called parthenogenesis (a.k.a. “virgin birth”). Aphids also reproduce by parthenogenesis, but they produce males sometimes. The BugLady can find obscure journal entries about their parasites and about the intricacies of their mitochondria, but nothing about what they eat (generically, the Psocoptera eat bark and dried plant material). Oh, and Psocidologists have a newsletter called “The Psocid News.”

Datana Caterpillar—another Ohio photograph. The BugLady is guessing that it’s Datana angusii, Angus’s Datana, because the caterpillar food plants are butternut, hickory and walnut. There are references to D. angusii being a pest on blueberry, which would be quite a departure from the nut trees, both metaphysically and habitat-wise. Datana caterpillars are notable because of their alarm posture; they look like figure skaters in that arched position that hurts the BugLady every time she sees it. 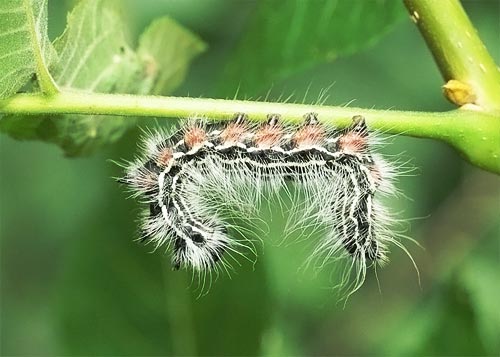 Datanas live in forests, woodlands and shrubby edges in the eastern half of the U.S. where their caterpillars’ food plants grow. Adults, which look like the Headless Horseman, seem not to feed (check here). 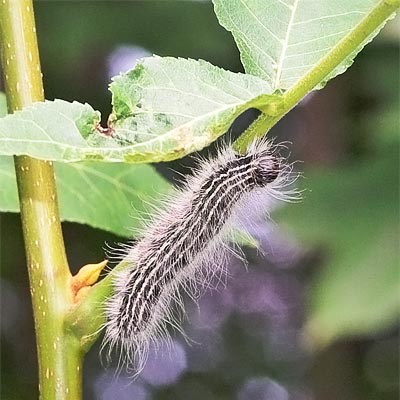 The Lord Leaf Beetle—what a grand name for a small beetle! Even grander is that within the leaf beetle family (Chrysomelidae), it is in the subfamily Cryptocephalinae. Crypto-cephalinidae–hidden head. The name comes from their heads, which, in profile, are sunken into the thorax almost up to the eyes. Larvae of the Cryptocephalinidae have the curious habit of creating, often from their own frass (BugPoop), a small protective case that they drag about and eventually pupate in. The case is about one size too small, so the larva’s posterior is folded into a hook in order for it to fit in. The fecal theme is continued in the female’s habit of covering her eggs with “fecal plates,” forming a “fecal encrustation” around an egg mass. 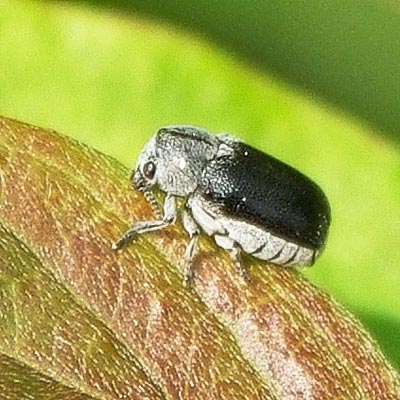 The Lord Leaf Beetle (Coleothorpa dominica) occupies most of North America except for the west coast. Western forms are “hairier” than eastern forms. The BugLady found LLBs on a list of “Rare or uncommon prairie-dependant insects of Wisconsin” (she photographed them on a bur oak at the edge of a restored prairie). Both the adults and the larvae are “polyphagous”—they eat a wide variety of plants including oak, rose, grape, prickly pear, poison ivy, and sumac. 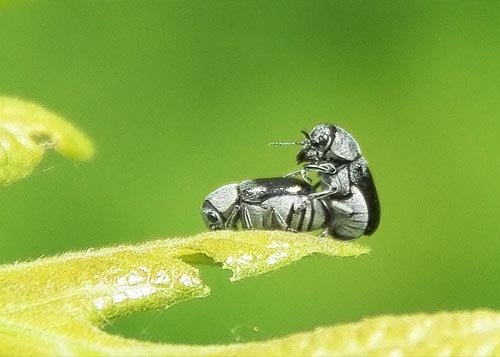 An on-line account ended with the tantalizing one-liner that the larvae of LLBs are myrmecophiles (sometimes found in association with ants).

Here’s an amazing insect-flower database (Scientific names only). It should open up on the bergemot page—just click on “return” at the bottom of the page to get to the main plant list. Also check out the cross-lists on the left.
BarkliceBeetlesCaterpillars